EU to speed up deportations to deal with Syrian crisis 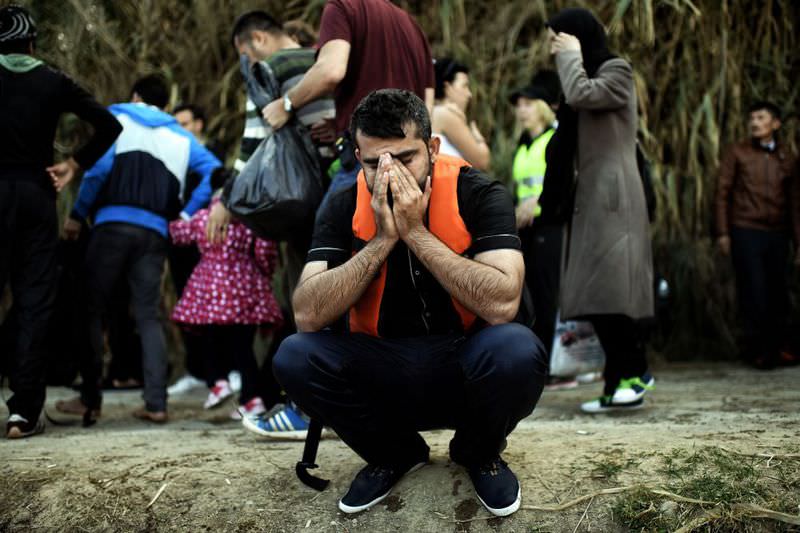 A migrant sits on the beach with other refugees and migrants after reaching the Greek island of Lesbos.
by Daily Sabah with Agencies
Oct 09, 2015 12:00 am

In a bid to curb the refugee crisis, EU ministers gathered yesterday in a push to speed up the deportation of failed asylum seekers. The meeting came a day after German Chancellor Angela Merkel called the current EU's asylum system ‘obsolete'

European Union ministers pushed yesterday to speed up the deportation of failed asylum seekers in a bid to curb Europe's migration crisis, ahead of key talks with officials from the Balkans and nations bordering Syria. The E.U. has also earmarked more than 400 million euros in additional funding to tackle the refugee emergency. Most of the money 300 million euros will be used to help Syrian refugees in countries outside the EU, including Turkey, Lebanon and Jordan.

In a sign of a tougher approach to the worst migration crisis since World War II, European interior ministers want a dedicated program to send back "economic" migrants who are largely from African nations. The European Union's focus in recent months has been more on genuine refugees fleeing conflict in Syria, Iraq and Afghanistan as it grapples with a wave of more than 600,000 illegal entrants to the bloc. "We need to crack down on people abusing our asylum system," British Home Secretary Theresa May said as she arrived at the talks in Luxembourg.

The meeting comes a day after German Chancellor Angela Merkel and French President Francois Hollande both called for an overhaul of the EU's asylum system, as they made a rare joint speech to the European Parliament. Merkel said the current Dublin regulations - which put the burden on Mediterranean states like Greece and Italy by saying asylum applications must be handled by the first state in which a migrant lands - were "obsolete."

However Austrian Chancellor Werner Fayman said planned EU "hotspots" on Europe's outer borders to better deal with the influx of thousands of migrants are far from ready, after he visited one such site in Greece. "In terms of timing and organization, nothing has been thought through," Werner Faymann told Austrian public radio in an interview. "A lot more has to happen... There are gaps everywhere."

Yesterday, ministers from the 28 EU nations were debating draft proposals to increase the ability of member states to speed up both voluntary and forced returns of failed asylum seekers in cooperation with their countries of origin. "The EU and its member states must do more in terms of return," according to a copy of the draft conclusions obtained by AFP. "Increased return rates should act as a deterrent to irregular migration."

Last month EU ministers overrode opposition from Eastern European nations to approve a plan to redistribute 160,000 refugees. A first batch of Eritreans, believed to be around 20 people, is due to be relocated to Sweden from Italy on Friday.

Economic powerhouse Germany has taken the lead in admitting refugees but is so overwhelmed by the numbers - predicted at up to one million asylum applications this year - that it is also stressing the need to return economic migrants. "We can only take and support people who are in need of protection," German interior minister Thomas de Maiziere told reporters as his government expects to take in 1 million migrants this year alone. He also sought to use European development funds as leverage to ensure countries of origin take back economic migrants. The draft proposals say, "A fine balance of incentives and pressure should be used to enhance the cooperation of third countries on readmission and return."

Meanwhile, Merkel has come out swinging, insisting "we will manage" the crisis set to define her nearly decade-old chancellorship as she is under growing domestic pressure over her open-door policy on refugees. Usually calm and measured if not dull, Merkel spoke passionately in an hour-long TV interview late Wednesday on one of Germany's most popular talk shows. Amid the historic migrant influx, she implored citizens to harness the bold can-do spirit of Germany's reunification a quarter-century ago, and to remember that granting safe haven to persecuted people is a core European ideal. "We will manage this, of that I am firmly convinced," she said. In the evening TV show, Merkel conceded that amid the current chaos no-one knows the exact number of arrivals, but also delivered a reality check to those who want to shutter German borders. "We cannot close the borders," she said. "If you build a fence, people will find other ways. There is no such thing as putting a stop to it."

French President Francois Hollande also said, "Europe was slow to realize that the crisis in Middle East and Africa would have consequences for Europe itself. We must provide Turkey with assistance and ensure refugees are able to work [and] feed their children," he said. Turkey is currently hosting the world's largest refugee population, including 1.9 million Syrians, and has spent around $8 billion over the last five years.

Europe has seen more than 600,000 illegal arrivals this year as people flee conflict in Syria and other countries, while more than 3,000 people have died while making the dangerous journey across the Mediterranean. Several rights groups, international organizations and world leaders have been repeatedly emphasizing the necessity of international collaboration and a comprehensive response to the crisis. Compared to Syria's neighboring countries, the U.N. High Commissioner for Refugees encouraged European countries to do more to share the burden of the international community in the migrant crisis.