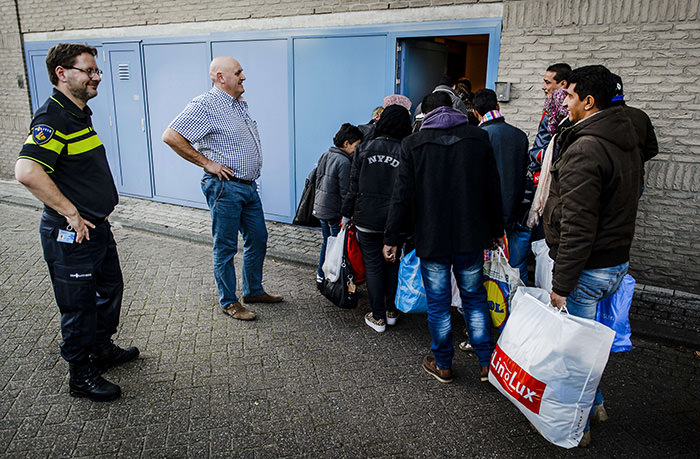 Refugees arrive at a register location in an old police office in Rotterdam, on September 30, 2015 opened as to support the refugee registration centre in Ter Apel in Groningen (AFP Photo)
by Daily Sabah with Agencies
Oct 12, 2015 12:00 am

Police were forced to intervene in the central city of Utrecht on Sunday when hundreds joined a rally organized by the far-right German PEGIDA movement, short for "Patriotic Europeans Against the Islamization of the Occident." Some 10 people were arrested after a smoke bomb was thrown, and scuffles flared between PEGIDA supporters and those demonstrating against the group, Dutch media reported.

Tensions are rising in the Netherlands over the thousands of refugees due to be given shelter in the country under a European Union scheme.
Dutch police are also investigating a Friday night attack by men dressed in black and wearing balaclavas on a sports hall in the central city of Woerden where some 150 refugees, including 51 children, are temporarily housed. No one was hurt in the incident, but police on Sunday were still questioning 11 men aged between 19 and 30 who allegedly tried to storm the building, attacking it with fireworks and pelting it with eggs. "This cowardly action is totally unacceptable," Prime Minister Rutte said on his Facebook page, after visiting the group on Saturday who he said had been very "shocked" by the incident.

Over the next two years, the Netherlands will take in more than 7,000 people, as EU nations share out the migrants flooding into the continent, mainly from Syria and Iraq, in Europe's worst refugee crisis since World War II.

Last week, an angry crowd in the tiny village of Oranje tried to block the car of Deputy Justice Minister Klaas Dijkhoff after he revealed the small hamlet was to house some 1,200 refugees, twice the number initially planned. A woman was injured and hospitalized after she threw herself against Dijkhoff's car. Rutte, who on Friday had already called for calm over the refugee situation, vowed after his visit to Woerden that those behind the attack would be severely dealt with.

Some local mayors have reacted angrily at government plans for temporarily housing refugees in their villages, saying they were being "overruled" by ministers based in The Hague.

A poll published Sunday in the De Telegraaf newspaper showed that the Freedom Party (PVV) of firebrand far-right Dutch lawmaker Geert Wilders appears to be shooting up the polls amid the refugee crisis. His party won 15 seats in the last elections in 2012. But according to the daily De Telegraaf, if elections were held today his party could snatch as many as 35 seats in the 150-seat lower house.

Despite refugee-friendly campaigns and rallies across Europe, several European cities have been witnessing increasing attacks and rallies against refugees, fueled by xenophobia. Following the refugee influx into the continent, many far-right and populist parties have shown an increase in their votes. Last week, German Interior Minister Thomas de Maiziere warned of a "massive" increase in attacks on asylum seekers. "We are witnessing a massive increase in xenophobic attacks on asylum seekers," de Maiziere said in an interview with the Berliner Morgenpost newspaper. "This year, more than 490 criminal attacks have been committed against asylum centers." Last year, 162 attacks on shelters were recorded by police across Germany. In 2013, it was 58 and 24 the year before. Anti-immigration ideology and xenophobia have become more visible in the country as a result of the efforts of political parties like the NPD and Alternative for Germany (AFD), as well as anti-Islam and anti-immigrant initiatives like PEGIDA, which have staged anti-immigrant rallies and drawn thousands of people throughout Europe, especially in Germany.
Last Update: Oct 12, 2015 2:43 pm