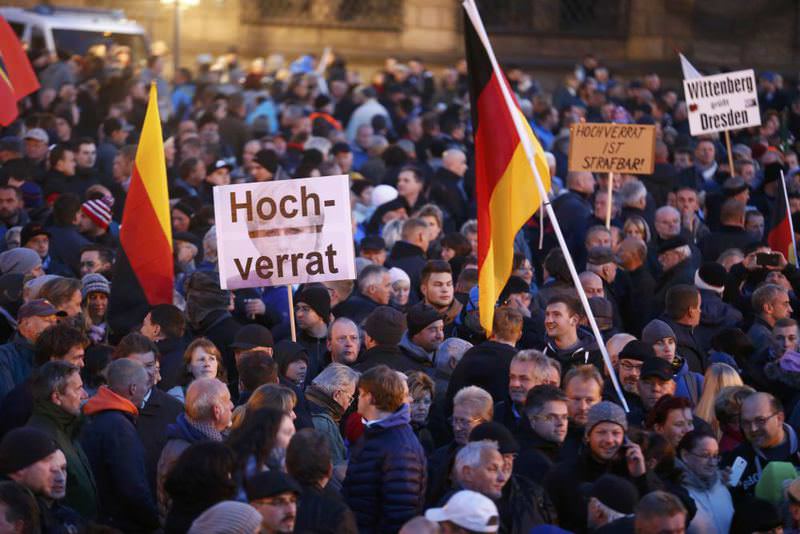 People hold up a sign reading 'high treason' as they gather for an anti-immigration demonstration organized by the extreme right movement PEGIDA in front of the Palace Church in Dresden.
by Daily Sabah with Wires
Oct 14, 2015 12:00 am

Germany's anti-Islam group, Patriotic Europeans Against the Islamization of the West (PEGIDA), stepped up attacks on Chancellor Angela Merkel on Monday, calling her "the most dangerous woman in Europe" and demanding she resign.

Around 9,000 people marched through Dresden chanting slogans and waving anti-immigration placards, according to Durchgezaehlt, an organization that estimates the size of public gatherings. Smaller protests occurred in the nearby towns of Chemnitz and Leipzig, police said.

In Dresden, around 250 opponents of the movement shouted back at them, but the groups were kept apart by police. One PEGIDA demonstrator was detained after an altercation with an officer. Another demonstrator could face legal charges, for waving a model of a gallows with the names of Merkel and Economy Minister Sigmar Gabriel, under the legislation of prohibiting death threats, a police spokesman said. Prosecutors were to decide Tuesday.

PEGIDA leader Tatjana Festerling told a rally of thousands of supporters in the eastern city of Dresden that Merkel's policy of welcoming refugees had turned Germany into a "gigantic camp in the jungle." Festerling, who came fourth in Dresden's mayoral elections in June with 10 percent of the vote, denounced Merkel as "irresponsible," describing her as "the most dangerous woman in Europe."

Germany, Europe's largest economy, is expected to take in up to 1 million people fleeing war and poverty this year, sparking anger among anti-foreigner groups and the PEGIDA movement. At the latest of a series of weekly rallies, Festerling accused Merkel of deliberately refusing to "protect Germany's borders."

Merkel has linked herself closely to Germany's policy of relaxed asylum laws amid a surge in migrants, many of them refugees fleeing wars in places like Syria and Afghanistan. A poll last week showed support for her Christian Democrat Union of Germany (CDU) party dropping to 39 percent.

PEGIDA emerged about a year ago with several hundred people showing up for "Monday strolls" in Dresden, although its numbers grew in the following months. At its peak, the xenophobic rallies attracted 25,000 marchers in Dresden, but also sparked far larger anti-fascist rallies in cities across Germany. The movement fizzled early this year following bickering among the leadership and after co-founder Lutz Bachmann sparked uproar with his anti-foreigner slurs and Facebook pictures showing him sporting a Hitler moustache and hairdo.

The mood at the Dresden rallies has become increasingly aggressive, and the reports of protester attacks on migrants, journalists and PEGIDA opponents have started to eclipse the day-to-day assistance given by hundreds of city residents to asylum seekers. Many accommodation centers have also reported violence against and among migrants, and several have been victims of arson attacks.

Meanwhile, Germany will extend temporary border controls until the end of October with a special focus on the Austrian border, the Federal Interior Ministry said yesterday. Berlin, which started to implement the controls on Sept. 13, has told the European Commission it will maintain them until Oct. 31, as "the situation at the border is such that we cannot do without them," a ministry spokeswoman told Agence France-Presse (AFP). "We need to return to an orderly handling of the refugee policy."

In addition, Merkel's conservatives and her Bavarian allies have agreed on a plan to set up "transit zones" at the border to filter out migrants who clearly have no chance of gaining asylum, Bavarian Minister-President Horst Seehofer said on Monday. Seehofer, who heads the Christian Social Union in Bavaria (CSU), the sister party to Merkel's CDU, said a concrete proposal would be drawn up by the two parties, the Bavarian government and the federal government, this week. Speaking at a CDU event at the northern city of Stade, Merkel said the idea was to directly stop at the border those people coming from countries deemed as safe, meaning their citizens have no claim to asylum, which include Kosovo, Albania and Montenegro. Among those already in that category are Serbia, Macedonia and Bosnia.

Germany, the EU's most populous country and top economy, has taken in the largest share of migrants arriving in Europe to escape war and poverty, with total numbers expected to reach 800,000 to 1 million this year. Merkel has urged the country to welcome the newcomers and help to quickly integrate them, but she has faced harsh criticism and falling approval ratings, amid rising fears about the burden that the refugee wave poses for Germany. Anti-immigration ideology and xenophobia have become more visible in the country as a result of the efforts of political parties like the National Democratic Party of Germany (NPD) and Alternative for Germany (AfD), as well as anti-Islam and anti-immigrant initiatives like PEGIDA, which have staged anti-immigrant rallies and drawn thousands of people throughout Europe, especially in Germany.