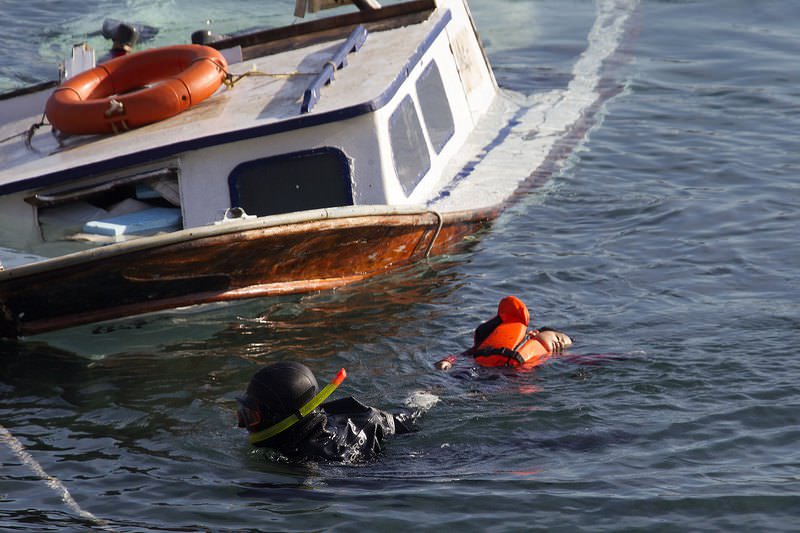 by French Press Agency - AFP
Oct 15, 2015 12:00 am
A wooden boat carrying dozens of migrants from Turkey to Europe sank Thursday near the island of Lesbos after colliding with a Greek coastguard vessel, leaving at least seven people dead, including four children, rescuers said.

The boat sank within minutes of the crash with a 30-metre (100-foot) patrol vessel on Thursday morning, in circumstances that were being investigated.

The first bodies to be retrieved were those of a woman, two young girls and a baby, the coastguard said.

Three other victims, "a woman, a man and a minor", were found later, the coastguard said as Greek rescuers backed by a Portuguese ship and an EU border agency Frontex helicopter combed the waters for the missing.

The 31 survivors who were brought to safety had reported a total of eight people missing.

An AFP photographer who witnessed the crash from the shores of Lesbos said the boat went down just two or three minutes after the collision, which took place some two kilometres (1.2 miles) from land.

The photographer saw rescuers scrambling to pull people out of the water, with a second coastguard vessel and a Frontex helicopter arriving on the scene around 10 minutes later.

The nationalities of the migrants was not yet known.

Officials say an investigation has been ordered to determine the cause of the collision.

According to Greece's port police, the migrant boat had apparently been attempting to flee the coastguard vessel.

Scores of migrants have died making the perilous Aegean Sea crossing from Turkey to Greece.

On Wednesday, a woman, a young girl and a baby died after their boat sank off Lesbos.

The International Organization for Migration says more than 600,000 migrants have landed on Europe's shores since January, while more than 3,000 had died or gone missing in the attempt.

More than 450,000 people have arrived in Greece, most of them fleeing the civil war in Syria.

Athens and the UN refugee agency have both called on the European Union to open up more legal channels for people fleeing war and persecution, so that they do not have to risk their lives to reach safety.
Last Update: Oct 15, 2015 8:44 pm