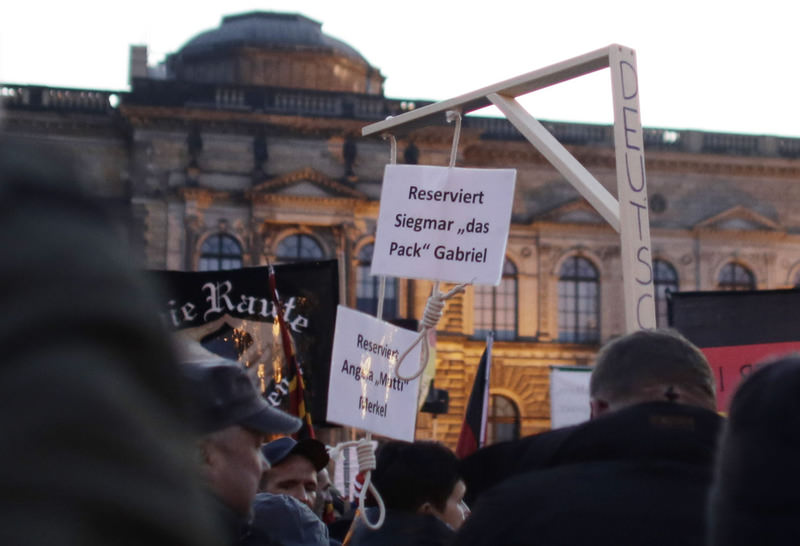 A demonstrator carries a mock gallows with two hangman's nooses, marked: ,Reserved for Angela Merkel,, and ,Reserved for Sigmar Gabriel,, her deputy, at a PEGIDA demonstration in Dresden.
by Daily Sabah with Wires
Oct 15, 2015 12:00 am

As Germany's far right increasingly vents its fury over Merkel's refugee policies, the Islamophobic PEGIDA group displayed miniature gallows with the names of Merkel and her deputy at a rally earlier this week. German prosecutors have launched an investigation into the incident

German prosecutors Tuesday said they were investigating after Islamophobic PEGIDA protesters at an anti-refugee rally displayed a miniature gallows with the names of Chancellor Angela Merkel and her deputy.

The probe against persons unknown was on suspicion of public incitement to commit criminal acts and disturbing the peace, charges that carry up to five years in jail, said prosecutors in the eastern city of Dresden. Lawmakers voiced outrage over the macabre stunt at Monday night's rally that drew thousands of supporters of the PEGIDA movement, short for the "Patriotic Europeans Against the Islamisation of the Occident."

"It is repulsive and disgusting. Every citizen can see what spirit prevails here," said Michael Kretschmer of Merkel's conservatives. "The rule of law must be brought to bear with full force."

Germany's far-right has increasingly vented its fury over Merkel's decision to open the borders to up to 1 million asylum seekers this year, and xenophobic hate crimes have spiked. The gallows prop with a hangman's noose seen Monday carried a cardboard sign saying it was "reserved" for Merkel and the vice chancellor, Sigmar Gabriel of the center-left Social Democrats (SPD).

State investigators were trying to ascertain who had brought it to the demonstration of the movement, which turns one year old next week, a prosecution service spokesman told private news channel N24. SPD lawmaker Niels Annen, speaking to Handelsblatt business daily, said there must be consequences "when democratically elected representatives of our country are, even symbolically, threatened with death."

This should include the rally organizers "who apparently tolerate hateful slogans and symbols", he said, adding that PEGIDA's self-proclaimed "concerned citizens" were showing their "true face." Only the small populist-nationalist Alternative for Germany party refused to distance itself from PEGIDA, with its Saxony state chief Uwe Wurlitzer telling Handelsblatt that it "is a citizens' movement whose followers are exercising their right to freedom of assembly." The chairman of the German police union, Rainer Wendt, said security forces must keep a close eye on PEGIDA and "prevent the spread of a new, organized right-wing terrorism."

Germany was shocked to learn in 2011 that a neo-Nazi death squad calling itself the National Socialist Underground (NSU) had gone on a seven-year killing spree that claimed 10 lives, nine of them people with migrant backgrounds. "There must not be a second NSU," said Wendt.

Meanwhile, Chancellor Angela Merkel resisted pressure from her own conservatives on Tuesday to tighten Germany's border controls and turn away refugees arriving via Austria, participants at a meeting of lawmakers said. Germany, a favored destination for refugees fleeing war in the Middle East, expects a record 800,000 to a million asylum seekers to arrive this year.

The influx is proving a major logistical challenge, straining resources as the authorities struggle to register and house all the new arrivals, some of whom remain in tents as winter approaches. Merkel has seen her popularity ratings slump to a four-year low and some members of her Christian Democrats (CDU) and their Bavarian sister party, the Christian Social Union (CSU), want her to take a tougher line with comprehensive border controls.

If Germany took such a course, it would have disastrous consequences for all countries on the asylum seekers' route from the Balkans as Austria and Hungary would then have to turn away refugees as well, the participants said Merkel had told the meeting. Instead, Merkel said she would seek during planned talks in Turkey this weekend greater cooperation with Ankara to stem migration flows, though she could give no promises on how quickly that could be achieved.

The conservative lawmakers unanimously supported a draft bill drawn up by the CDU-run Interior Ministry that provides for transit zones to hold refugees at border crossings so asylum requests can be examined before they are allowed in. Sigmar Gabriel, vice chancellor and leader of the Social Democrats (SPD), junior partner in Merkel's ruling coalition, criticized the idea of transit zones. Participants at an SPD meeting said he dubbed them "detention zones."

Germany, the EU's most populous country and top economy, has taken in the largest share of migrants arriving in Europe to escape war and poverty, with total numbers expected to reach 800,000 to 1 million this year.