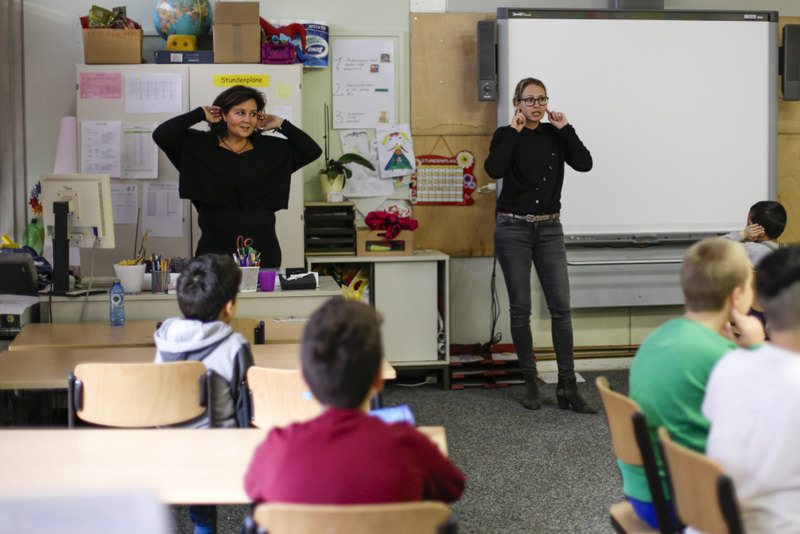 A volunteer (L) and teacher (R) teach students in a ,Willkommensklasse, (Welcome Class) at an elementary school at the Baeke in Berlin.
by Daily Sabah with AP
Oct 16, 2015 12:00 am

Deeply traumatized by violence in their countries, refugee children in Germany try to integrate into classes. German teachers say although many present special challenges due to traumatic experiences, almost all refugee children love going to school and consider it a protected place

Fadi and Fadiya started school in Berlin last month not knowing a word of German. The 9-year-old twins from Syria are among nearly 400,000 children among a wave of up to 1 million migrants expected in Germany this year alone. All around the country, schools have added extra teachers and "welcome classes" to teach kids like Fadi and Fadiya the basics of German before they are integrated into regular classrooms around six to eight months later.

As a new school year began last month, Berlin's schools saw non-German speaking children jump by 70 percent. There are now 478 welcome classes in the capital alone for roughly 5,000 new refugee children. Fadi and Fadiya's school, located near their asylum home, will open a second welcome class in a few weeks, reflecting the massive demand for special schooling for refugee kids in Berlin and elsewhere. The Associated Press was allowed into the classroom under an agreement not to publish the children's last names to protect their privacy.

Fadi, wearing an oversized Spiderman hat, and his sister Fadiya, with a brown ponytail and big timid eyes, were among 20 new arrivals from 11 countries in the welcome class offered by an elementary school. On Tuesday morning, teacher Sandra Wiandt, an energetic woman with a warm smile, taught them the days of the week, colors and autumn vocabulary.

The children ages 6 to 12 came from Syria, Iraq, Egypt, Libya, Bosnia, Serbia, Bulgaria, Korea, Ghana and the U.S. Not all were refugees. Some, for example, were children of parents who had relocated to Germany for work. They got a first taste of the intricacies of the German language as they had to repeat differing singular and plural forms of words like chestnut, acorn and leaf specimens of which they'd picked up on the schoolyard the day before.

"Some of those kids have never seen a school from the inside because they spent years hiding in basements from bombs," said principal Irina Wissmann. "But we're trying to get them used to our routines as quickly as possible it's the best thing that can happen to them right now." Because of their backgrounds, however, many present special challenges.

Among the current group of students, there is one Syrian boy who doesn't participate much in class, but constantly kneads little figures out of Play-Doh, and draws men lying buried in the ground under big trees. "We had one child who would hide under the desk during the lesson and scream in panic, scaring off all the other kids as well," Wissmann said.

Civil wars and political upheavals across the Middle East and North Africa are preventing more than 13 million children from going to school, according to a report released by UNICEF last month. Children from Syria are especially affected. Even if their families manage to escape to refugee camps in Jordan, Turkey or Lebanon, more than 700,000 Syrian refugee children cannot attend school there, because the countries' overburdened education infrastructure cannot cope with the extra student load, the U.N. said.

Because of the huge surge in numbers over the summer with thousands crossing the German-Austrian border every day many asylum seekers are now being put up in huge tent cities and former army barracks outside the cities for up to six months without any schools nearby. Sometimes volunteers will offer German-language classes, but not necessarily regular ones and by no means for all those in need. However, as soon as the asylum seekers are relocated to smaller homes inside cities and towns, officials are trying to sign the young ones up for school.

Even German Chancellor Angela Merkel made a point of stressing the importance of teaching refugee children German language, habits and culture by recently visiting a Berlin welcome class. "It's worth it to make an effort for every single child," Merkel told reporters after visiting the school. "When there are thousands of refugees coming to Berlin every day, then that's a huge challenge, but I have the impression that there's also an unbelievable degree of motivation."

The teacher Wiandt, who joined her welcome class this year, said the experience so far has been rewarding. "Obviously, we can see that many of these children are deeply traumatized, but most of the time we don't know what exactly happened to them," she said. "But despite their scared souls, almost all refugee children love going to school and often don't want to go back to their overcrowded, cramped asylum centers in the afternoon." She said that for the children, school is a "protected place." "Sometimes it's the first place in years where nobody can harm them and where they can finally play again, too," Wiandt said.

Still, because of their situation as newcomers, even that security may eventually be shattered, said Wissmann, the principal. "Sometimes a child's seat stays empty in the morning," she said. "And when we call up the refugee home we find out the family was relocated or deported overnight."

Germany, the EU's most populous country and top economy, has taken in the largest share of migrants arriving in Europe to escape war and poverty, with total numbers expected to reach 800,000 to 1 million this year.
Last Update: Oct 16, 2015 2:27 am