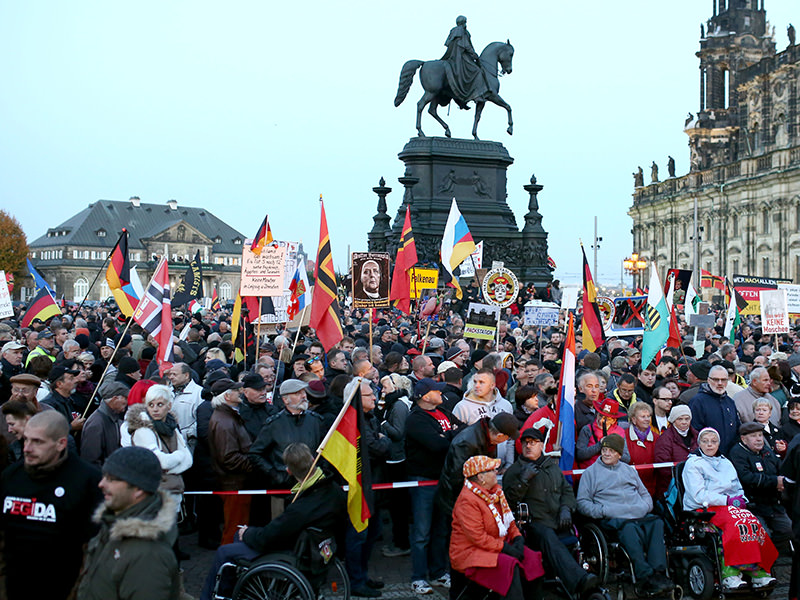 Thousands of Pegida supporters demonstrated on Theaterplatz square in Dresden, Germany, 12 October 2015 (AA Photo).
by German Press Agency - DPA
Oct 19, 2015 12:00 am
Germany's political leaders stepped up their warnings about right-wing violence ahead of a rally in the eastern German city of Dresden on Monday to mark the first anniversary of the anti-foreigner Pegida movement.

Pediga, which lost much of its following this year amid internal fights, has gotten new momentum as more and more Germans express concerns about the country's policy to ease European asylum rules so it can take in those escaping war-torn parts of the Middle East and Africa.

Police are expecting thousands to turn out for the weekly Monday's Pegida march through Dresden after about 9,000 people joined a rally a week ago.

German Chancellor Angela Merkel's spokesman said on Monday the chancellor believed those attending the protests organized by Pegida - Patriotic Europeans Against the Islamization of the West - "had hate in their hearts." Merkel once again warned people stay away from the rally

At last week's Pegida's rally one protestor carried gallows marked "reserved" for Merkel, while one of the movement's leaders described the chancellor as "the most dangerous woman in Europe."

"There can be no more excuses for those who run around with gallows and Hitler moustaches," Justice Minister Heiko Maas said on Monday.

Tensions surrounding Monday's Pegida rally have been heightened by Saturday's knife attack on a local pro-refugee politician in the western German city of Cologne.

Police said that the man carrying out the attack on Henriette Rekel, who was running for the city's mayor in an election on Sunday, has told them he had acted because of her stance on asylum seekers.

Rekel went on to win the election with many electors saying they the attack had resulted in them voting for her. Rekel remains hospitalized after the attack.

Leipzig's mayor Burkhard Jung also received a death threat on Monday, with the drawing of gallows and words "Mayor Jung we'll get you," scrawled across a container, police said. Leipzig is just a short distance from Dresden.

Monday's Pegida rally comes against the backdrop of political analysts warning of a radicalization of the movement following the recent surge in refugees entering Germany.

A major police presence is planned for Dresden on Monday to keep the peace between the anti-migrant rally and its pro-asylum opponents.

From what was initially just a few hundred participants in what it calls a weekly "evening walk" through Dresden, Pegida managed to draw a crowd of more than 25,000 in January, when it reached the height of its popularity.

But the numbers attending the weekly rallies fell sharply following a series of scandals that rocked the organization, prompting Bachamann and five other members of Pegida's leadership to leave the movement.

This included the scandal triggered by the publication of Bachmann posing as Hitler. He was indicted for posting racial slurs on Facebook.

Bachmann has again taken up the reigns of the movement just as it has been garnering more support.

Pegdia's renewed strength also comes as Merkel faces mounting political pressure after she declared more than a month ago that Germany could handle the influx of refugees.

Early in September, she brushed aside concerns about whether Germany could house, shelter and possibly integrate such an enormous number of new arrivals by saying: "We can do this".

The chancellor's liberal refugee stance also prompted a rebellion among some of her supporters, with Merkel facing a stormy meeting of her conservative Christian Democrats in Saxony, the state of which Dresden is the capital.

Saxony has also seen a dramatic rise in attacks on refugee accommodation and in acts of violence.

The current official estimate for the number of asylum seekers arriving in Germany this year - mainly fleeing conflicts in Syria and Afghanistan - is 800,000, but the government in Berlin concedes that the number is likely to be much higher. About 200,000 arrived in 2014.

A counterdemonstration has been organized for Monday by an alliance of political parties, unions, churches and interest groups under the banner "Heart instead of Hate."

Silvio Lang of the group Nazi-free Dresden, has vowed that the day will "not be a success for Pegida." The left-wing group has repeatedly attempted to blockade marches organized by Pegida and other far-right groups.
Last Update: Oct 19, 2015 4:21 pm