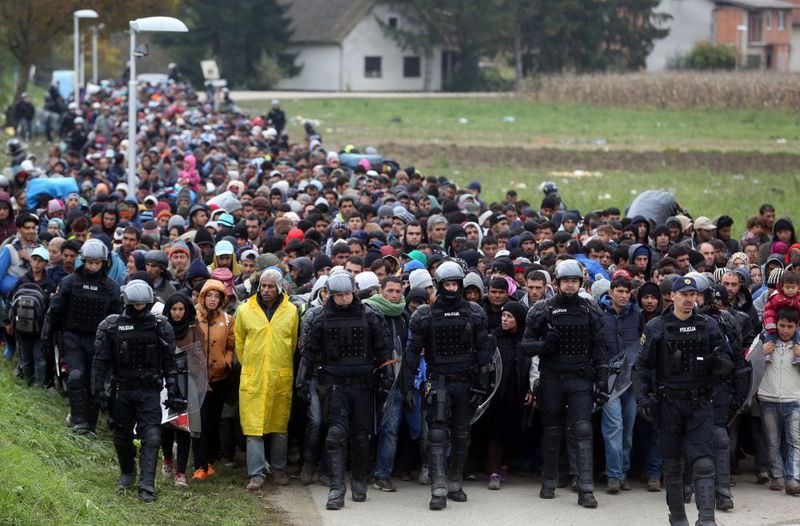 About 1,000 migrants are escorted by Slovenian police from the border crossing with Croatia .
by Daily Sabah with Wires Oct 23, 2015 12:00 am

Stranded in the Balkans, desperate refugees continue to flow into Slovenia, a new refugee hotspot after Hungary sealed its southern borders. Overwhelmed by the influx, Slovenia is now pinning its hopes on the EU response

The new refugee hotspot Slovenia said heavy refugee traffic continues in the country with more than 12,600 people crossing from Croatia on Wednesday alone, raising the total to more than 34,000 since Saturday.

The small European nation is now pinning its hopes on the EU's migration commissioner's visit today and on the summit that will be held on Sunday. Slovenia has been the main entry point into the passport-free Schengen zone on the migrant trail, after Hungary sealed its key southern borders with razor-wire fence to migrants.

In view of "the unfolding emergency" in the region, the European Commission called a mini-summit with Balkan leaders on Sunday, acknowledging there was "a need for much greater cooperation... and immediate operational action."

More than 10,000 people were in Slovenian registration centers yesterday morning hoping to continue their journey to Austria, whose border refugee camp was also bursting with new arrivals. Further south, between 2,000 and 3,000 more migrants also remained stranded near Croatia's border with Slovenia.

Several hundred stood shivering in cold weather and fog at the Berkasovo checkpoint where progress was slow yesterday, an AFP photographer said. The crowd chanted "Open! Open!" as Croatian police were only allowing a trickle of people through every 15 minutes. Many migrants had spent the night in makeshift tents on the roadside, with temperatures plunging close to zero degrees Celsius.

In the face of such tough conditions, people often resorted to lighting makeshift fires to warm themselves. On Wednesday, there was a moment of panic at another Croatian border crossing when 27 tents suddenly caught fire at the Brezice refugee camp. Firefighters managed to quickly extinguish the blaze, whose cause remained unclear. The continent has been struggling to find a unified response on how to tackle its biggest migration crisis since 1945.

The Turkish government on Wednesday warned it was bracing for a new mass exodus from neighboring Syria amid escalating violence there. The goal for many is the EU's biggest economy Germany, which expects to receive up to a million asylum requests this year. With the crisis showing no sign of abating, France's Interior Minister Bernard Cazeneuve reinforced security in the port city of Calais from where migrants and refugees try to cross to Britain. He also announced that women and children would be given heated tents, as arrivals in a makeshift camp face a dip in temperature.

Meanwhile, EU conservative parties meeting in Madrid Wednesday called for the bloc's external borders to be strengthened, warning the flow of migrants could "destabilize" the region. But European Commission chief Jean-Claude Juncker said Europe had a duty to help the migrants. "I don't often cry but when I see, night after night, this long procession of refugees that reminds me of images from the end of World War Two... it almost makes me cry," he said Wednesday.

Last month, the EU approved plans to relocate 160,000 asylum seekers from overstretched frontline states Italy and Greece with a compulsory quota system that was fiercely opposed by some eastern, more hardline members of the bloc. The proposal requires most of the 28 member states to accept a share of those people over the course of two years.

The turmoil in the Middle East and the five-year war in Syria have led many people to flee the conflict in an attempt to seek security and shelter in a more prosperous and peaceful country, such as in Europe. Compared to Syria's neighboring countries, the U.N. refugee agency encouraged European countries to do more to share the burden of the international community in the migrant crisis.
RELATED TOPICS