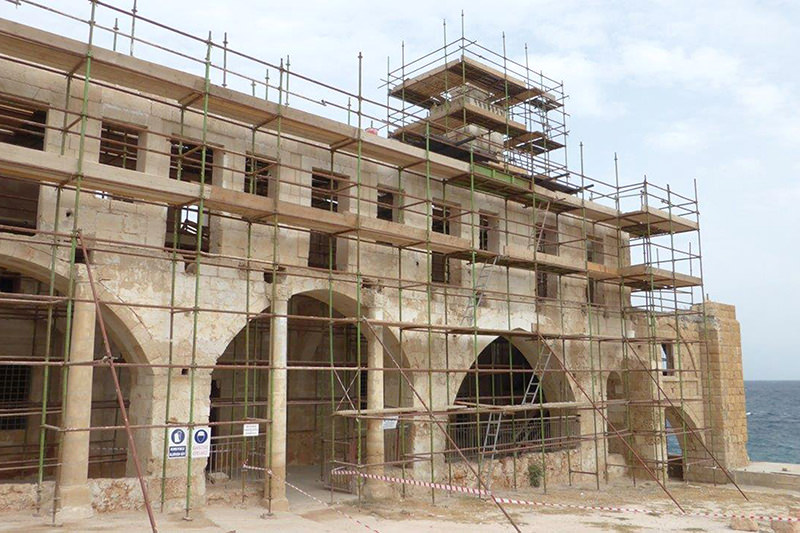 This photo provided by the UNDP-PFF in Cyprus on Friday, Oct. 23, 2015, shows the Apostolos Andreas monastery in Karpasia at the Turkish Cypriot breakaway northern part of the island as it undergoes restoration works (AP Photo)
by Daily Sabah with AP
Oct 24, 2015 12:00 am
Work to restore a monastery on the divided island of Cyprus has brought Turkish Cypriots together with Greek Cypriots, and Muslims with Christians.

Lore stretching back to the dawn of Christianity says this monastery sits directly over a fresh-water spring created by one of Jesus' first disciples, St. Andrew, while he was waiting for winds to pick up so he could continue his ship-borne travels.

The spring water, lore says, even helped restore the sight of the captain's blind son. In gratitude, the captain built a small church on this rocky outcrop near this tip of Cyprus' northeastern Karpas Peninsula and dedicated to the saint.

That church became the foundation for the 19th century Apostolos Andreas monastery deeply revered not only by the island's Greek Orthodox faithful, but also many Muslim Turks who would mount weeks-long pilgrimages there.

But the monastery was left to ruin in the wake of the island's ethnic division, following a coup aiming at union with Greece. Experts feared its crumbling trusses and sandstone walls were at risk of collapsing.

Now, the monastery is undergoing a much-needed restoration that is serving as a poignant symbol of how the island's rival communities have joined to protect its religious and cultural heritage while fostering trust as United Nations-sponsored reunification talks gather pace.

"This sends the message to Europe and the Middle East that here in Cyprus, there are no disputes between religions," said Takis Hadjidemetriou, a member of the Technical Committee on Heritage, a body of Greek and Turkish Cypriots tasked with preserving religious and cultural monuments on both sides of the divide.

Hadjidemetriou's Turkish Cypriot counterpart Ali Tuncay hailed the monastery's restoration as one of the most important projects undertaken by the committee because of its symbolic resonance.

"We wanted to show Greek and Turkish Cypriots that if we can establish the conditions, we can work together and produce together for the benefit of all Cypriots," Tuncay said.

The restoration work, jointly done by Greek and Turkish Cypriot contractors, is now half completed with work concentrating on shoring up the church and monks' cells built atop the church's roof. The Orthodox Church of Cyprus and the Turkish Cypriot Muslim Evkaf Administration are jointly picking up the 2.5 million euro ($2.77 million) tab for this first restoration phase.

"This is what we wanted, to see the monastery restored, not to see it slowly being destroyed," said 76-year-old Father Zacharias Georgiou, who has been the church's priest for 54 years.

Hadjidemetriou said finishing all restoration work on the church and surrounding structures could push the total cost of the project as high as 6 million euros.

Turkey's project to supply drinking and irrigation water to Turkish Cyprus was finalized and launched last Saturday with a ceremony taking place both in Turkish Cyprus and Anamur district of southern Mersin province.

Upon request from Greek Cypriots, also suffering from a lack of water, their inclusion to the water supply project might be put under consideration.

Negotiations between Turkish and Greek Cyprus resumed in February 2013 after a two-year pause, but Greek Cyprus suspended negotiations after Turkey sent a hydrocarbon exploration vessel to Greek Cyprus' southern coast in October of last year. Turkey later recalled the ship back. Turkey is the only nation to recognize Turkish Cyprus while the majority of the international community recognizes Greek Cyprus, which is a member of the EU.