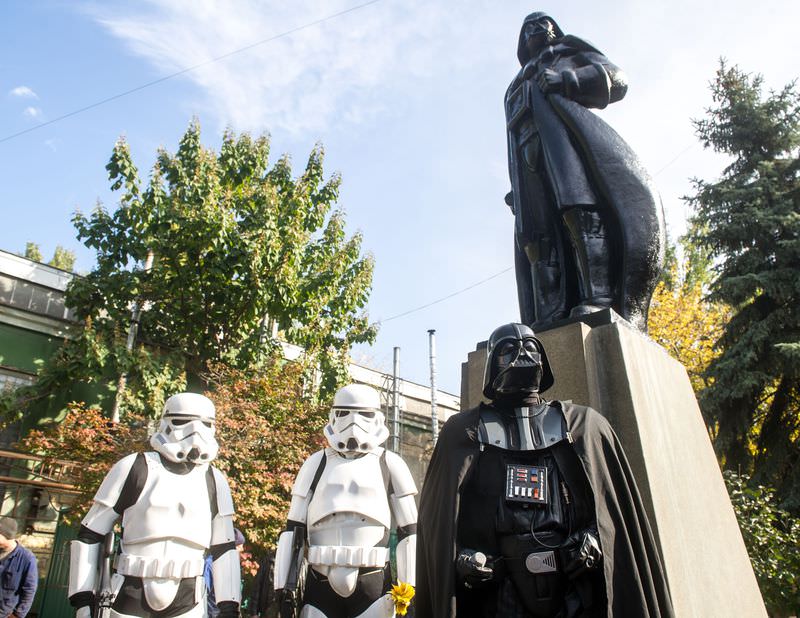 by French Press Agency - AFP Oct 24, 2015 12:00 am
Just in time for the release of the latest "Star Wars" blockbuster, Ukrainians have transformed a statue of Lenin into one of Darth Vader, an oddly prominent figure in local politics.

Soviet founder Lenin -- long despised by most in non-separatist parts of Ukraine -- fell victim to a law adopted in April that ordered the removal of all symbols and insignia reminding the country of its communist past.

Darth Vader is also cast as the embodiment of evil in the George Lucas movies -- a black-masked light sabre-wielding villain who is in permanent battle with the good Force.

But the Dark Lord of the Sith is a rather more popular figure in Ukraine, where Western culture is being embraced and the Soviet past erased from history -- a transition that outrages Russia.

One masked villain tried joining last year's presidential race, being denied registration only after he refused to disclose his real name and identity papers.

Later that year, Darth Vaders ran as candidates for mayors of Kiev and Odessa, the historic Black Sea port where the new statue was formally unveiled Friday.

"Star Wars" characters such as the grunting hairy giant Chewbacca, the Jedi Master Yoda and the courageous Princess Amidala also tried their luck in November's parliamentary poll in full costume, all without success.

Most of these offbeat candidates represent the tiny Pirate Party of Ukraine -- one of more than 40 groups that have sprung up worldwide in defence of Internet freedoms and limits on copyright laws.

This Sunday, another Darth Vader will run for Odessa mayor again as the crisis-torn east European country holds local elections across Kiev-controlled lands.

"After the de-communisation law was adopted earlier this year, we had to decide what to do with the monument (of Lenin)," Oleksandr Milov, the new statue's sculptor, told AFP.

"Honestly, I did not like the idea of destroying it, so we decided on a more flexible solution."

New elements were added to the original plaster statue without causing it any harm.

"The idea was obvious since the Darth Vader movement has been at the centre of Ukrainians' attention in recent years," Milov said.

There are plans to build a Wi-Fi router into the statue's head so he can "communicate with the other Siths", he added.

A granite statue of Lenin in the heart of Kiev was famously toppled by enthusiastic protesters during the three-month revolution that ultimately ousted a Moscow-backed leadership in February 2014.

Symbols of Ukraine's Soviet past are also slowly disappearing across other parts of the country, although they are becoming more prominent in the pro-Russian separatist southeast.

The rebels' de facto capital Donetsk is now peppered with posters of Stalin, the bloodthirsty dictator who successfully sidelined his rivals in a vicious 1920s battled to take over Lenin's reins.