11 refugees, including 6 infants, drown off Greece 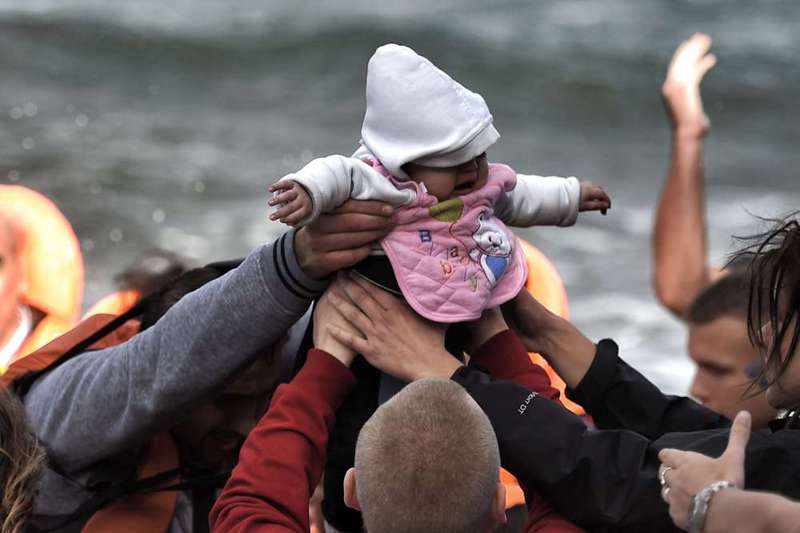 A baby is carried by migrants as they arrive on the Greek island of Lesbos after crossing the Aegean Sea from Turkey.
by Daily Sabah with Wires Nov 02, 2015 12:00 am

Six more children have drowned off the Greek island of Samos as refugees keep heading to Europe on perilous journeys, After Aylan Kurdi's death, more than 75 children have been reported to have died so far

11 migrants drowned on Sunday in a new tragedy that occurred off the Greek island of Samos, coastguard officials said. 10 bodies were found in the cabin of the boat which overturned as it made the hazardous crossing from the nearby Turkish coast.

Another victim, a young girl, washed up on a nearby island. Two others are still missing. Coastguard officials said a total of 15 migrants were rescued after the boat wrecked.

"We recovered 11 bodies, 10 of which were trapped inside the vessel's cabin," a coast guard official said, adding that the dead included four babies, two children and four women.

The new accident adds to the latest string of migrant boat tragedies. Around 60 people have drowned this week while trying to reach the Greek islands of Lesbos, Kalymnos and Rhodes. On Friday alone, 22 people, including 17 children, lost their lives while trying to cross to the eastern Aegean islands from Turkey, to which more than 2 million Syrian refugees have fled. That disaster followed Wednesday's tragedy, in which 24 migrants drowned as they tried to reach Lesbos, Samos and Agathonissi.

With the arrival of rough winter weather and fears that Europe is about to close its doors to refugees, more than 80 people – most of them children – have drowned trying to reach Greece in October, according to an AFP report.

Since the beginning of the year, 580,125 migrants have landed on Greece's shores, according to the UN's refugee agency (UNHCR), with a total of 723,221 crossing the Mediterranean to Europe.

The harrowing image of 3-year-old Syrian refugee Aylan Kurdi, whose body was found washed up on the shore in Bodrum after the boat carrying his family to Kos sank, has caused an outpouring of emotion around the world, pressuring European leaders to step up their response to the refugee crisis. Shortly after the picture was posted on Twitter, the picture went viral and became the top-trending picture with the hashtag "KıyıyaVuranInsanlık," which means "humanity washed ashore." Even though it has attracted attention to the growing refugee problem and world leaders have made calls to find a solution, the tragedy has not ended.

More than 70 children have died attempting the same crossing between Turkey and Greece. In a statement issued on Thursday night, Save the Children said the short Aegean Sea crossing was becoming more deadly as winter weather set in. According to Save the Children, the International Organization for Migration (IOM) said 69 children died trying to make the crossing from Turkey to Greece between Sept. 2 and Oct. 26.

Kate O'Sullivan, part of Save the Children's response team in Lesbos said that "What we need are safe and legal routes for refugees to come to Europe, to stop people who have already suffered so much losing their lives close to the end their journey. I have seen children sleeping in the mud under a flimsy bit of cardboard, and kids shivering with blue lips and hands. We expect the situation to get much worse as winter really bites."

The turmoil in the Middle East, Africa and the five-year war in Syria have led many people to flee their countries and seek shelter in Europe. Roughly half of Syria's population has been displaced by violence, with over 4 million Syrians now seeking refuge in neighboring countries, especially Turkey, which has around 2 million refugees, as well as Lebanon, Jordan and Iraq. More than 700,000 people fleeing war and misery have reached Europe's Mediterranean shores so far this year, with the majority coming from Syria, Afghanistan and Iraq.
Last Update: Nov 02, 2015 1:40 am
RELATED TOPICS