Number of children seeking asylum in Europe nearly double that of 2014: UNICEF UK 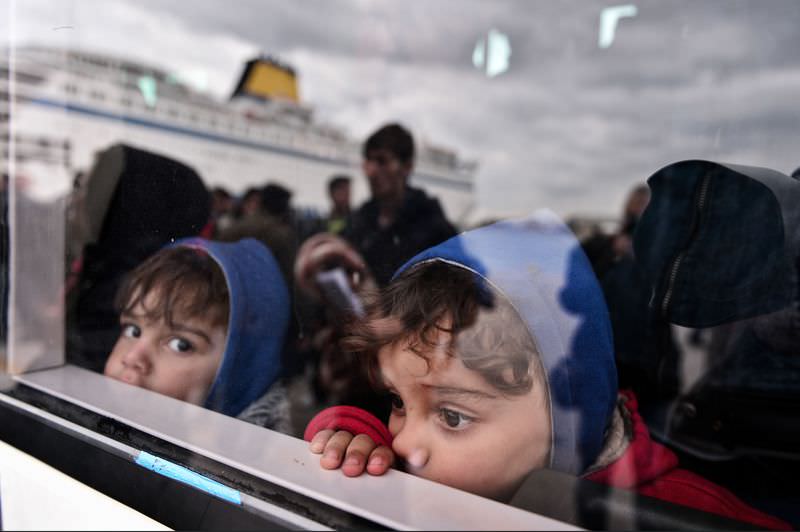 Refugee children peek out from a bus taking them to the city's center, after disembarking from a government chartered ferry at the port of Piraeus on October 30, 2015. (AFP Photo)
by reuters Nov 03, 2015 12:00 am
The number of children seeking asylum in Europe has nearly doubled since last year, a symptom of the growing number of children fleeing conflicts and persecution, the U.N. children's agency (UNICEF UK) said on Tuesday.

Some 190,000 children sought asylum in Europe between January and September, up from 98,000 in the same period last year, according to Eurostat data collated by UNICEF UK.

In the first nine months of this year, 10,000 unaccompanied or separated children arrived in Italy and Malta alone.

"Of all refugees and migrants, unaccompanied children are the most vulnerable to abuse and exploitation," UNICEF UK said in a report.

Many of the 190,000 children have fled Syria or neighbouring countries hosting Syrian refugees, where child labour and child marriage have increased since the start of the war.

In Syria, one in five children are forced to cross conflict lines to take exams, UNICEF said.

The refugee figures for Europe are just the tip of the iceberg. In 2014, children made up just over half of all refugees around the world - the highest proportion for more than a decade, UNICEF said.

One in 10 children in the world are now growing up in a conflict zone - some 230 million children.

"Children have been killed while studying in the classroom, recovering in hospital or sleeping in their beds. Many have been orphaned, forced to become soldiers, kidnapped, raped and traumatised," said UNICEF UK deputy executive director Lily Caprani.

"Protecting children from violence is life-saving, just as much as water, shelter and medicine, yet it isn't prioritised in the same way," Caprani added.

"This has to change."

Children living in other types of emergency are also at greater risk of violence, exploitation and abuse this year.

The children's agency received reports of children being trafficked in the wake of the Nepal earthquakes, and of a rise in sexual violence against girls during the Ebola epidemic.


During the Ebola crisis, some attempts to contain the epidemic made children more vulnerable to abuse, UNICEF UK said. Schools were closed, and children were sometimes quarantined with abusive family members.

Children in Sierra Leone reported that school closures led to increases in child labour and exposure to violence in the home and community, and early marriage.

More than 18,000 children lost one or both of their parents or primary caregivers.

"There are lessons we can learn for future health crises in how we manage child protection - especially as the likelihood is we'll see more health crises," Leah Kreitzman, director of public affairs at UNICEF UK, said in an interview.
Last Update: Nov 03, 2015 8:24 pm
RELATED TOPICS