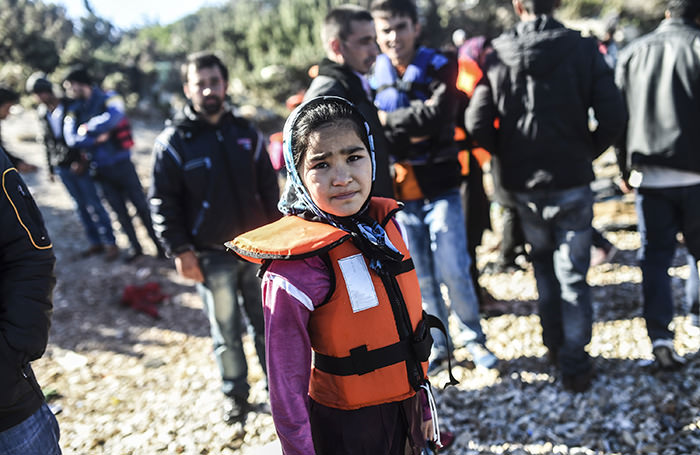 A girl waits along with other migrants and refugees to travel to the Greek island of Chios from Cesme in the Turkish province of Izmir on November 3, 2015 (AFP Photo)
by Daily Sabah with AFP
Nov 04, 2015 12:00 am

The first group of refugees left Greece for Luxembourg as part of the EU relocation plan while EU border agency Frontex announced more than 800,000 refugees have surged to the continent. Frontex officials warn the influx has probably not reached its peak

The first refugees left Greece on Wednesday under an EU relocation plan, but Prime Minister Alexis Tsipras warned they were a "drop in the ocean" as the number of illegal refugees entries surged to 800,000 this year.

The six Syrian and Iraqi families, who are heading to start new lives in Luxembourg, are the first to be relocated from Greece under plans to share out nearly 160,000 refugees across the bloc in a scheme fiercely opposed by some EU members. Tsipras, who was at Athens airport to see the 30 refugees off, said they were making "a trip to hope," but warned they are merely "a drop in the ocean" compared to the hundreds of thousands who have arrived on European shores this year. "Today they have the opportunity to make a trip to hope, to a better life," said Tsipras, who was joined at the airport by Luxembourg's Foreign Minister Jean Asselborn. "It's a drop in the ocean, but we hope the drop will become a stream and then a river of humanity."

He spoke as Fabrice Leggeri, the head of the EU's Frontex border agency, told Germany's Bild newspaper that refugees have made some 800,000 "illegal entries" to the bloc so far this year and warned that the influx has probably not "reached its peak."

"EU states must prepare for the fact that we still have a very difficult situation ahead of us in the coming months," added Leggeri. Last month, Frontex said that 710,000 refugees had entered the EU in the first nine months of the year but cautioned that many people had been counted twice.

The need for a solution to Europe's worst migration crisis since World War II is becoming increasingly urgent, with at least 80 refugees - many of them children - dying in the last week while trying to sail from Turkey to Greece in rough weather. "It's these flights that should be routine, not shipwrecks," Greek Deputy Immigration Minister Ioannis Mouzalas said as the refugees flew out from Athens. On Tuesday four more refugees, including two children, drowned after their boat got into difficulty off the Greek island of Lesbos.

"The human sacrifice that shames European civilization must stop," said Tsipras, whose country saw more than 200,000 people land on its beaches in October alone, according to the U.N. refugee agency UNHCR. Ankara's cooperation is seen as key to ending the crisis, and on Tuesday EU president Donald Tusk urged the government to work closely with Brussels after the ruling Justice and Development (AKP) party swept back to power in elections at the weekend. The EU last month announced a refugee cooperation deal with Turkey including a possible three billion euros in aid.

Two first groups of Eritreans and Syrians left Italy under the relocation scheme last month, bound for Sweden and Finland, although some countries such as the Czech Republic, Hungary, Slovakia and Poland still oppose the mandatory quotas.

A Greek asylum service official said the group leaving Athens yesterday, chosen because they are considered vulnerable, were made up of two Iraqi and four Syrian families, with a total of 16 children. One of the women is pregnant and two of the children are disabled.

On arrival in Luxembourg the families will spend two days in a registration center and then two or three months in temporary accommodation. The welfare service will then help them to find permanent place to live, schools and jobs.

Several European countries have closed their borders in the midst of the refugee crisis, and on Tuesday Austria became the latest country to tout plans to tighten its asylum rules. Lawmakers have put forward a bill, due to go before parliament in December, that would mean anyone granted asylum would be reassessed after three years and sent back if their country of origin is deemed safe. Chancellor Werner Faymann said the controversial legislation is a "signal that asylum is something which is temporary" and is aimed at deterring people from coming to Austria.

Rights groups criticized the proposals, saying they would make it harder for refugees to integrate into Austrian society, and the UN refugee agency said tightening rules on relatives "could keep families apart for many years, if not for ever."


The turmoil in the Middle East and the five-year war in Syria have led many people to flee the conflict in an attempt to seek security and shelter in a more prosperous and peaceful country, such as one in Europe. However, Europe has been slammed for lacking a collaborative response to the crisis. The U.N. refugee agency encouraged European countries to do more to share the burden of the international community in the refugee crisis.
Last Update: Nov 04, 2015 2:51 pm