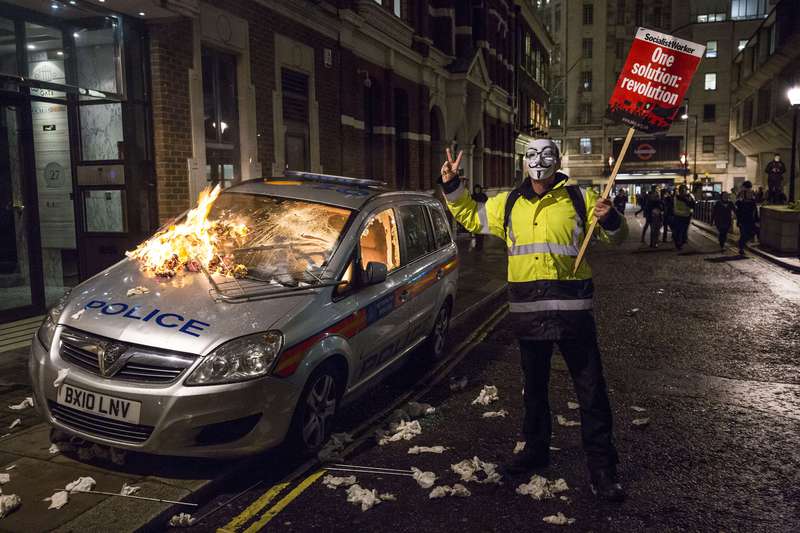 by Daily Sabah with AFP
Nov 06, 2015 12:00 am
Activists set a police car alight and scuffled with riot police in central London as thousands took part in a "Million Mask March" anti-capitalist demonstration on Thursday night.

Many activists wore the white masks associated with the international Anonymous network at the march, an annual anti-establishment protest that takes place on Britain's Guy Fawkes Night. 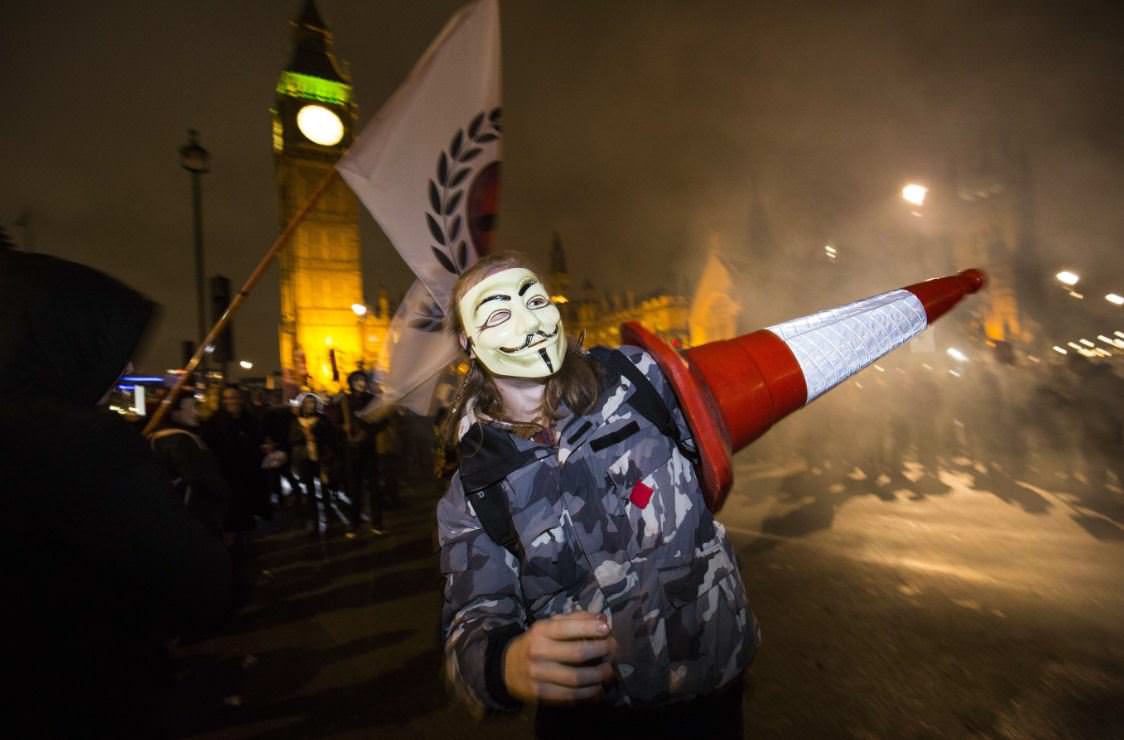 Demonstrators threw fireworks and bottles at police, some of whom were knocked from their horses, while several bleeding protesters were treated for injuries as authorities tried to contain the march.

Police said 28 people were arrested for public order offences and that three injured officers had been taken to hospital.

Protesters chanted "One solution: revolution" and "Whose streets? Our streets" and split into different factions, confronting lines of police outside Buckingham Palace and the office of Prime Minister David Cameron.

Some demonstrators ran through London's major shopping district around Oxford Street, smashing windows and engaging in running scuffles with police as shops closed their doors.

One protester who emerged from the crowd with blood pouring from his head close to the headquarters of the ruling Conservative party said he had been caught between a surge of demonstrators and police batons. 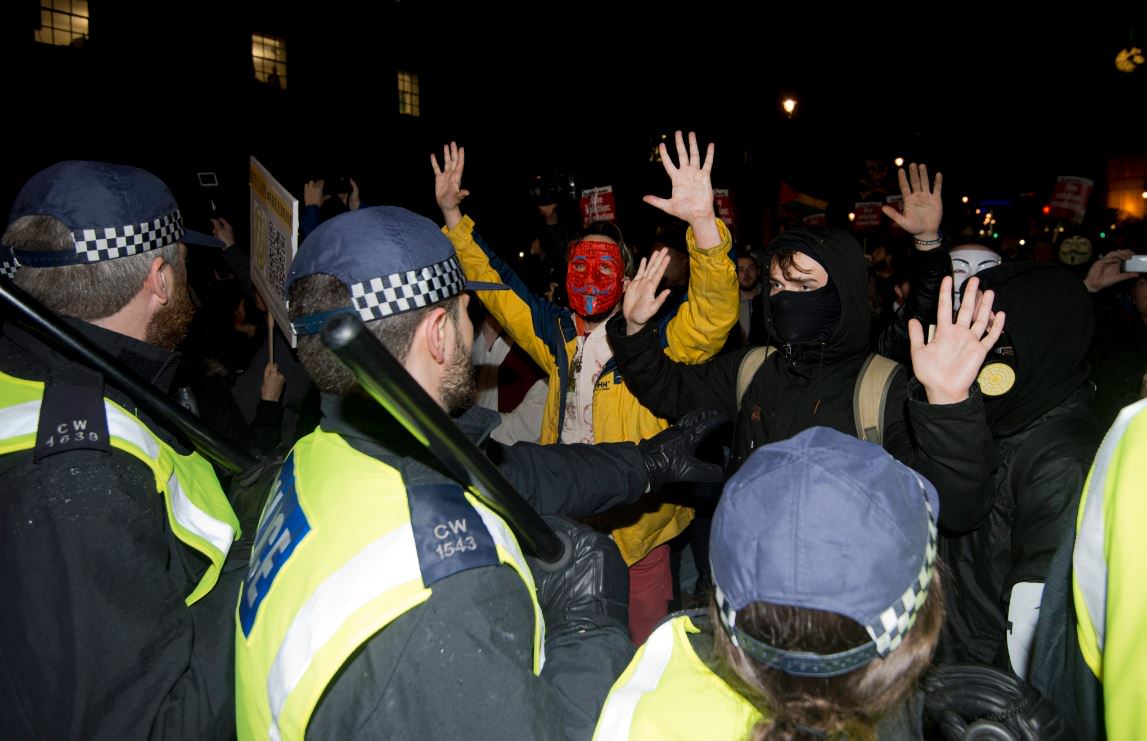 "I was at the front, I was chatting with the officers asking them what their agenda was and why they were trying to stop us walking down the street," said Terry Small, 20, from the southern English city of Plymouth.

"I got pushed in the back by people trying to move forward... I couldn't move."

One group of activists gathered outside the British premiere of the finale of the "Hunger Games" in Leicester Square, as stars Jennifer Lawrence and Julianne Moore walked the red carpet.

Mexican anarchist Aztecarna Peatonito said the march was a protest against inequality and that wearing the white masks of Guy Fawkes, the man who plotted to blow up parliament in 1605, helped promote their cause. 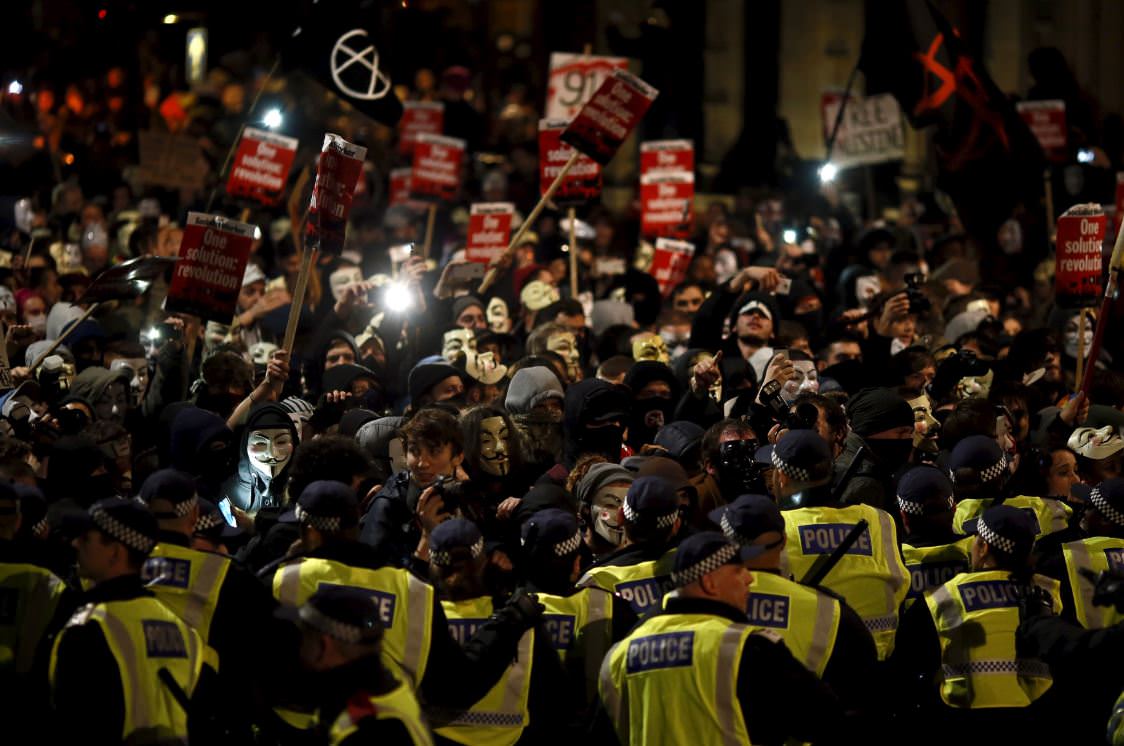 "We tried for six years to get the press to take us seriously. It is only when we wore the masks that we started getting attention," Peatonito said. "Anyone who is violent is not with us."

Police had put in place special security measures ahead of the march, which also saw scuffles and arrests last year, and formed cordons surrounding two groups of marchers in Trafalgar Square and outside parliament.

Under the measures, demonstrators were to be confined to certain areas of central London and were required to remove their masks if asked by police and to disperse by 2100 GMT.

Three men "acting suspiciously" were arrested before the demonstration got under way, and were found to be in possession of knives, lock picks and smoke grenades, police said.
Last Update: Nov 06, 2015 8:02 pm