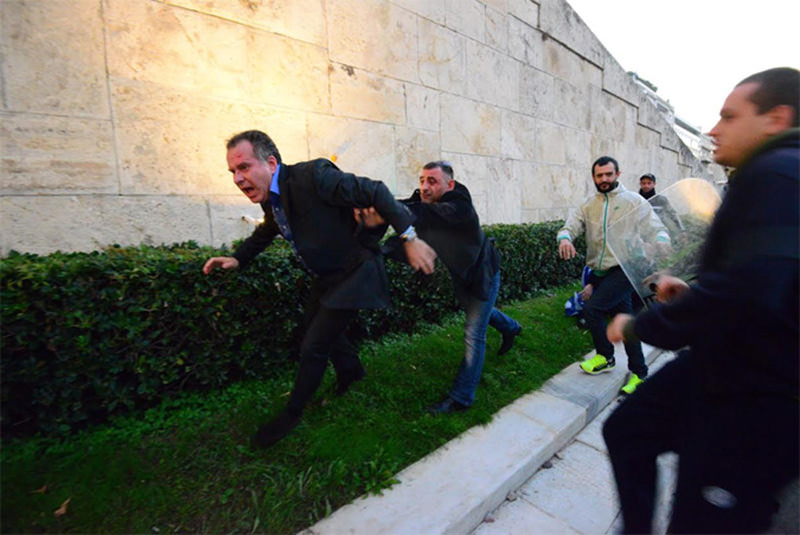 by Daily Sabah with Agencies Nov 06, 2015 12:00 am
A Greek conservative MP suffered a beating at the hands of suspected far-right activists during a protest in Athens on Thursday, his party said.

George Koumoutsakos, 54, suffered facial bruises but did not need to be hospitalised.

Speaking in parliament shortly after the incident, the New Democracy MPs accused neo-Nazi party Golden Dawn of being behind the attack.

"Those who did it...are those who have committed murder, they are the purveyors of racism, xenophobia and what is most extreme in the political and social life of the country," he said.

Leading members of the neo-Nazi Golden Dawn party are currently on trial for allegedly instigating the murder of leftist rapper Pavlos Fyssas two years ago.

Skai TV showed Koumoutsakos, a former diplomat and ex-foreign ministry spokesman, being struck by several people outside parliament as riot police stood by.

He is then seen being helped to safety.

No arrests were made.

The New Democracy party said Koumoutsakos had been beaten by "fascists" and that another of its MPs, Miltiadis Varvitsiotis, narrowly escaped being attacked.

The protest organized by the Pan-Pontic Federation of Greece (PEO) was sparked after Education Minister Nikos Filis said earlier this week that the deaths of Christian Greeks in Ottoman lands in early 20th century did not qualify as "genocide."

A large number of people responded to the POE's call and gathered at the Syntagma Square to protest the minister's remarks, but the protests turned violent as the perpetrators pushed and punched Koumoutsakos at the scene. Videos of the scene and eyewitnesses confirmed that police delayed interferingto protect the MP.
Last Update: Nov 06, 2015 2:55 pm
RELATED TOPICS