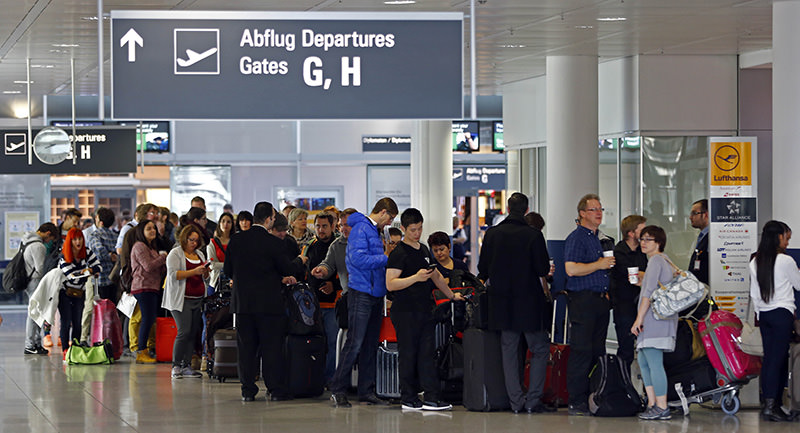 Passengers wait for information at a Lufthansa counter at the airport in Munich, Germany, Monday, Nov. 9, 2015 (AP photo)
by German Press Agency - DPA
Nov 09, 2015 12:00 am
Passengers with German air carrier Lufthansa faced another day of chaos on Monday after the airline moved to cancel 929 flights as it tries to operate amid a strike by flight attendants. About 113,000 passengers were likely to be affected by the industrial action, which forms part of campaign by the flight attendants' union, Ufo, to head off Lufthansa moves to restructure retirement benefits.

The airline's management met on Monday to consider what steps it can take in the dispute with its 19,000 cabin crew members. Options include a new offer to the union. Dusseldorf, Munich and Frankfurt - Germany's main airport hub - are the focus of Monday's strikes, with the cabin crew having walked off the job at different airports since they launched their industrial action on Friday. Salary negotiations with the flight stewards' union have been under way for about two years.

Lufthansa wants to lower retirement benefits for future staff while linking benefits to market returns on investment and restrict the practice of taking early retirement at 55. The union insists on retaining the existing system of retirement benefits. Lufthansa has been hit this year by a series of strikes - first by pilots and now Ufo - as it attempts to cut costs in the face of tough competition from budget carriers and new carriers from the Middle East.

The UFO flight attendants' union has said it plans to target different airports over the course of the week-long blitz of walkouts. Last week, Lufthansa nonetheless said it was raising its full-year forecasts after low oil prices and positive passenger numbers lifted profits in the third quarter.