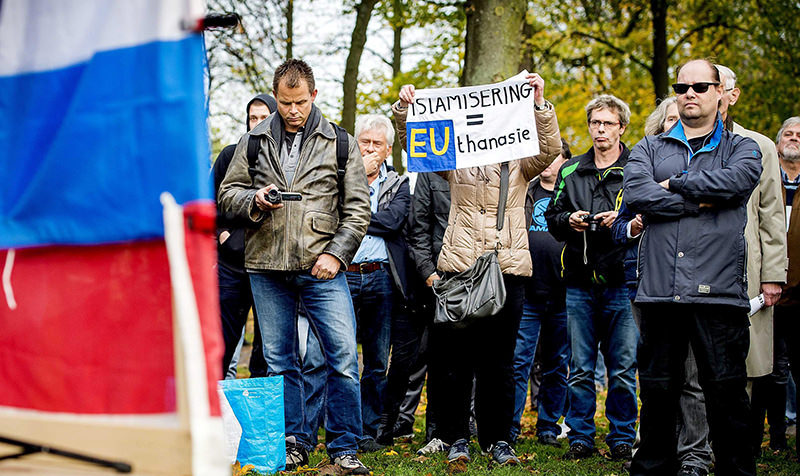 Supporters of the anti-Islam PEGIDA (Patriotic Europeans Against the Islamisation of the West) during a protest rally in Hogelandsepark, Utrecht, Netherlands (EPA Photo)
by daily sabah
Nov 09, 2015 12:00 am
European anti-Islam movement "Patriotic Europeans Against the Islamization of the Occident" (Pegida) has called on its supporters to avoid eating kebabs and told them not to go to Turkey for vacation, in their latest rally which took place in Utrecht on Sunday. Police have reportedly arrested 32 supporters in the rally for refusing to obey the police, carrying insulting placards and failing to carry IDs.

According to reports, Pegida leaders made Islamophobic and racist requests and said that Europeans should not eat kebabs, nor visit Turkey for a vacation.

Pegida's Netherlands head Raffi Khohan has reportedly told Europeans to not shop from supermarkets which have cashiers with headscarves.

According to reports, Dutch authorities did not permit Pegida to march in the city and told them to hold their rally at a park in the suburban region of Utrecht.

They held placards saying "'Islamization is EU-thanasia" and "Qur'an is poison."

Pegida is a German anti-Islamic political movement founded in Dresden in October 2014.

More than half of Turkey's annual overall visitors are European tourists and Turkey has also become a popular destination for healthcare, culture and spa tourism in recent years.

Kebabs have become a target of Islamophobic attacks and recently, a French mayor by the name of Robert Menard slammed the existence of kebab restaurants and said there were just "way too many immigrants and kebab restaurants" in the country. He noted that he would not give permission for more kebab restaurants to be opened within the borders of Beziers.