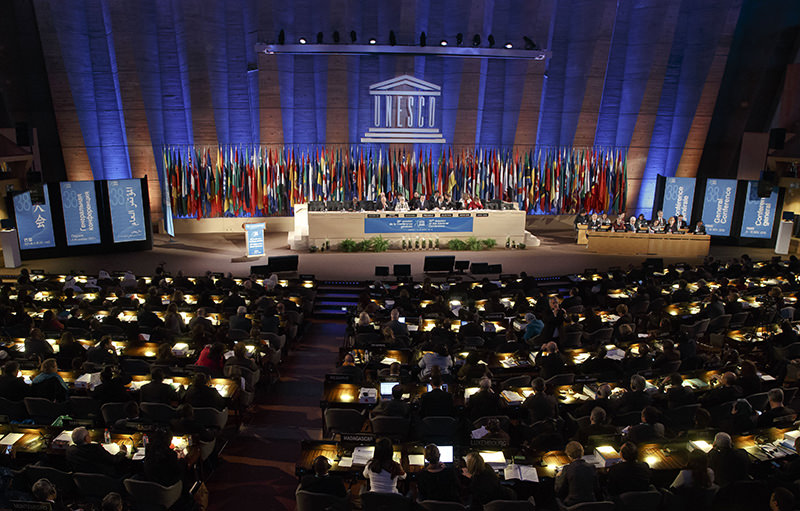 A general view of the 38th UNESCO's general conference at the headquarters in Paris, France, Tuesday, Nov. 3, 2015 (AP Photo)
by Compiled from Wire Services
Nov 09, 2015 12:00 am
Members of the U.N. cultural agency have narrowly rejected Kosovo's bid for membership, in a victory for Serbia and Russia and a blow to Kosovo's mission for global recognition as a state.

Most nations that participated in Monday's voting favored Kosovo's membership, with 92 "yes" votes and 50 "no" votes and 29 abstentions. According to UNESCO rules however, the bid needed the support of two-thirds of those voting, or 95 "yes" votes, said Stanley Mutumba Simataa, the Namibian diplomat presiding over the vote.

Kosovo has been recognized by 111 countries since it declared independence from Serbia in 2008. Russia, which backed Serbia in Kosovo's 1998-99 war for independence, has used its U.N. Security Council veto to block Kosovo from becoming a full U.N. member.

Kosovo has won membership in the World Bank and International Monetary Fund. The predominantly ethnic Albanian leadership had promised that if it became a UNESCO member, it would protect the cultural heritage of Serbs, despite tensions that have lingered since the war.

"The General Conference votes against the adoption of the resolution," said the session's president Stanley Mutumba Simataa after the vote at UNESCO's headquarters in Paris.

UNESCO's executive board recommended last month to accept Kosovo as a member, despite it not being a UN member state.
But Serbia, which considers Kosovo the cradle of its identity and religion, was strongly opposed and tried earlier in the day to delay the vote.
The U.S. delegation supported Kosovo's bid but no longer has voting rights in UNESCO over a funding flap.

The close result and large number of abstentions caused initial confusion in the vote tally. The outcome surprised many delegates inside UNESCO's Paris headquarters.

Kosovo applied for membership in the U.N. Educational, Scientific and Cultural Organization in September, and last month the UNESCO Executive Board recommended that it be admitted during the body's General Conference Nov. 3-18.

Russia's delegation argued Monday for the vote to be delayed, but the request was rejected and the vote went ahead.