100,000 passengers to be affected by cancellation of 930 Lufthansa flights 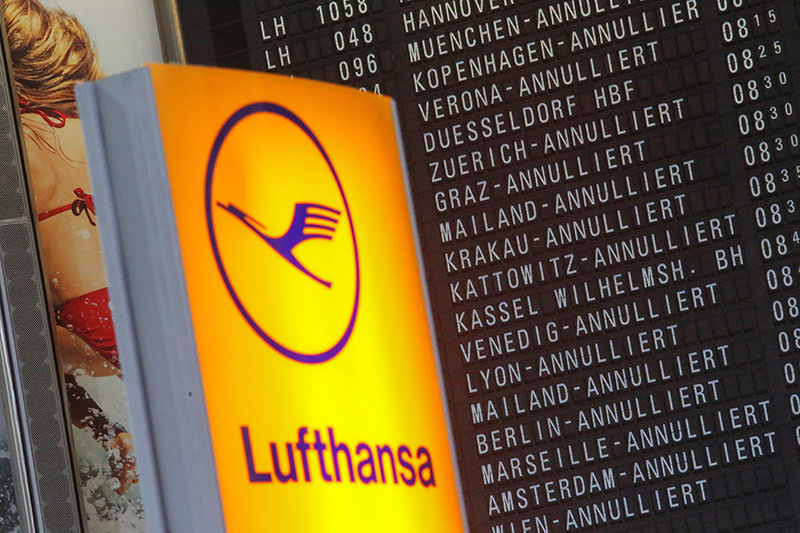 Cancelled Lufthansa flights listed on a display panel at the airport in Frankfurt am Main, Germany (EPA Photo)
by Associated Press Nov 10, 2015 12:00 am
Lufthansa has canceled 930 flights scheduled for Wednesday at three hubs in Germany after efforts failed to halt an ongoing strike by flight attendants.

The cancellations affect 100,000 travelers going to or from Frankfurt, Munich and Duesseldorf.

They were announced even as the airline and the union said late Tuesday they were open to mediation.

Officials for the UFO flight attendants union did not call a halt to the ongoing stoppages at Frankfurt, Munich and Duesseldorf, but indicated they would be open to mediation under certain conditions, the dpa news agency reported. A mediation proposal had been sent by the company.

As things stood, the union was to strike long-haul and local flights Wednesday through Friday at the three airports. The strike action started Friday and took a break Sunday.

Lufthansa has been able to carry out most flights despite extensive cancellations.

A court decision in the German city of Duesseldorf added to uncertainty. The labor court there ordered a temporary halt to the strike in that town, saying the strike's goals were not clearly formulated.

Court spokeswoman Anke Salchow said the decision only applied Tuesday. The court was to hear another request from Lufthansa on Wednesday.

The UFO union wants to secure transition payments for its 19,000 members if they retire early, among other demands as part of its contract dispute with Lufthansa, which is trying to cut costs.

The union rejected the airline's latest offer Monday, saying it constituted only a "minimal" improvement. UFO representatives noted Tuesday that the airline recently increased its pre-tax earnings forecast for the year.

Flights operated by Lufthansa subsidiaries such as Germanwings, Swiss and Austrian Airlines won't be affected.