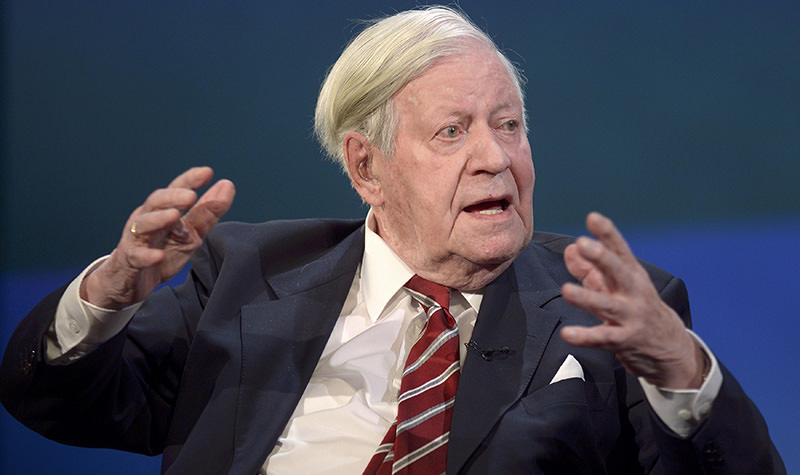 Former German Chancellor Helmut Schmidt gestures during his speech at his birthday party, organized by German weekly magazine ,Die Zeit, (Reuters Photo)
by Compiled from Wire Services
Nov 10, 2015 12:00 am
Former German chancellor Helmut Schmidt, who led West Germany amid terrorist strikes in the 1970s and laid the foundations for the euro currency, died Tuesday, aged 96, his doctor has said.

Helmut Heinrich Waldemar Schmidt was born a month after the end of World War I. He led Germany's democratic half through some of its most difficult times, as it struggled in the 1970s with domestic terrorism and was caught in the middle in the Cold War.

Among his lasting legacies is the euro currency, launched in 1999. Schmidt and former French president Valery Giscard d'Estaing laid the foundations for it in 1978-79, setting up the European Monetary System (EMS) and an embryonic joint currency known as the ECU.

Schmidt, who fought in Nazi Germany's forces in World War II in a tank division on the eastern front, became a Social Democrat while in a British prisoner-of-war camp. He studied economics and politics and went on to spend his entire working life as a professional politician.

He married his childhood sweetheart, Hannelore, nicknamed Loki, in 1942. She died in 2010. Their daughter Susanne is based in London. They also had a son who died in infancy of meningitis.

A straight-talking native of the northern city-state of Hamburg, Schmidt came to political prominence in the winter of 1962 as the state's interior minister. During a major flood, calling in the military to aid the stricken city.

Challenged on his decision, which probably saved hundreds of lives but technically violated the consitution, Schmidt fired back: "These days, I haven't been looking at the constitution."

His no-nonsense, pragmatic approach to politics laid the groundwork for his ascent, both nationally and on the world stage. However, it also prefaced later clashes with leftist ideologues within the Social Democratic Party (SPD).

During his first chancellorship, Schmidt gained a reputation as resolute, especially in foreign and financial policy. He co-founded the G7 summits, which continue to this day. He won respect as an intellectual heavy hitter on the world stage, saying a man's "character proves itself in times of crisis."

In late 1977, when the country was shaken by escalating left-wing terrorism from the Red Army Faction (RAF), Schmidt's mettle was tested almost to breaking point.

The chancellor refused to give in to RAF demands to free imprisoned terrorists in return for the life of the kidnapped president of the employers' association, Hanns-Martin Schleyer. As a result, Schleyer was murdered on October 18.

Almost at the same time, a Lufthansa airliner was hijacked with 86 passengers on board. Schmidt said in a steely televised address to the nation that the state would respond to such acts with "all necessary hardness."

He gave the order for the jet to be stormed by commandos, leading to all the hostages being saved.

In foreign policy, Schmidt defied many within his own party by backing the so-called NATO double-track decision of 1979, which offered the Soviet Union either a mutual reduction of nuclear weapons in Europe or a massive armaments race if this were turned down.

His policies espousing nuclear energy, boosting the role of the military and NATO and favouring business unleashed tensions with the leftists in his own bloc that spelled the beginning of the end.

In 1982, in his third term as chancellor, Schmidt instigated a vote of confidence which he narrowly won, only to be faced with a walkout by his coalition partners, the Free Democrats.

Out of office, elder statesman Schmidt continued to nurture the euro. He oversaw a political weekly newspaper, Die Zeit, as editorial director, became a father-figure for the centre-left and hosted a string of political celebrity visitors to his modest Hamburg home.

In more than 30 books, he advanced his ideas on foreign and domestic policy, often deploying his withering wit to puncture the political egos of the day. A competent musician, he recorded piano concertos of both Mozart and Bach.

Even in his 90s, Schmidt was still showing up for TV studio interviews, drawing awe for the ever-acute quality of his political judgement.

Remarkably for a man with a heart pacemaker, Schmidt continued to smoke - almost constantly - in public, on television shows and in restaurants where it was forbidden. Police simply refused to prosecute the former chancellor.

Remarking in a television documentary on how he had survived such an extraordinary political career, he joked that only two things were necessary.

"One needs willpower. And cigarettes," he said.