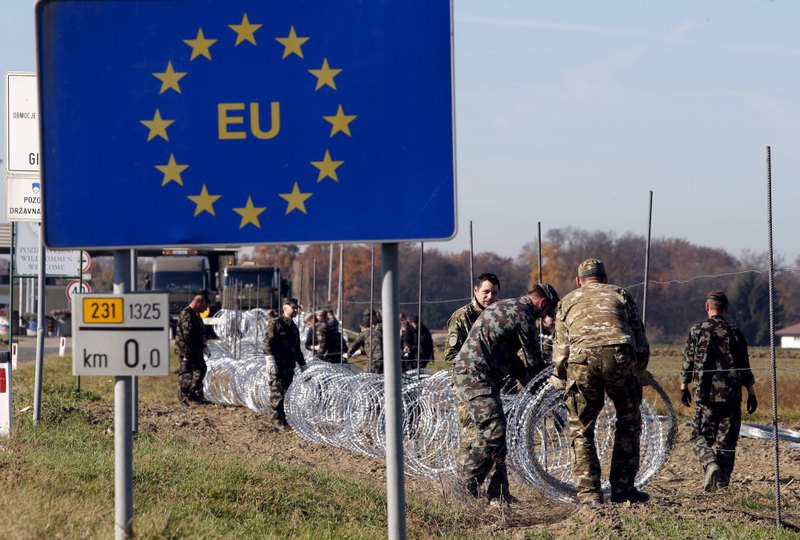 Slovenian soldiers set up wire barriers in the village of Gibina, Slovenia.
by Daily Sabah with Wires
Nov 13, 2015 12:00 am

European Council President Donald Tusk warned that the Schengen open borders accord was on the brink of collapse as a result of the fallout from the Syrian crisis. Meanwhile, Sweden has become the latest EU country to announce new border controls

Europe is in a "race against time" to save its system of passport-free travel and must move fast to tighten control of migration over its external borders, European Council President Donald Tusk said yesterday. His comments followed moves by Austria, Germany, Hungary, Slovenia and Sweden to reintroduce border controls or erect frontier fences to control migrant entries to their territory. Citing Sweden's move to re-impose checks on arrivals from other EU countries and new measures in Germany and Slovenia, Tusk said: "The recent developments in Germany, in Sweden, in Slovenia and in other countries all show with utmost clarity the huge pressure member states are facing."

His comments came two days after migration talks with African leaders in the Maltese capital Valletta. The Swedish government on Wednesday said it would temporarily reinstate border checks to deal with an unprecedented influx of migrants, making it the latest country in Europe's passport-free Schengen zone to tighten its borders over the crisis. "A record number of refugees are arriving in Sweden. The migration office is under strong pressure... and the police believe there is a threat against public order," Interior Minister Anders Ygeman said.

"So we will re-establish controls at our national borders tomorrow [Thursday] at 12:00 p.m. for a 10-day period," he added.

"Saving Schengen is a race against time," the former Polish premier Tusk said of the open border system among European states. "And we are determined to win that race." That would require implementing the series of measures agreed amid great dispute among EU governments over the past few months, he said. "This includes, first and foremost, restoring external border control. Without effective border control, the Schengen rules will not survive."

The Europeans quickly huddled after the summit for informal talks about how to cope with their biggest refugee emergency in decades. The bloc estimates that up to 3 million more people could arrive in Europe seeking sanctuary or jobs by 2017. Hungarian Prime Minister Viktor Orban who ordered an anti-migrant fence to be built on his nation's borders with Serbia and Croatia called migration a "lose-lose" phenomenon. "The solution is to have people have a decent life in the country where they were born. It's impossible to do without money," he told reporters at the Malta summit.

Tensions were also high yesterday in the Balkans, as Slovenia continued to erect a razor-wire fence on its border with Croatia to hold back the migrant influx. Croatian Interior Minister Ranko Ostojic claimed Wednesday to domestic paper Vecernji List that Slovenian police entered Croatian territory while constructing the barrier and intended to control the flow of migrants on the frontier. The two countries have a long-standing territorial dispute dating back to the wars in Yugoslavia in the 1990s, and Croatia believes the border fence is encroaching on its soil. Their leaders also met yesterday to try to calm the row. Slovenia said it was being overwhelmed by the arrival of more than 180,000 asylum-seekers moving toward Western Europe since mid-October.

Germany has been another country which brought back border controls in September, in what amounted to a de-facto suspension of its Schengen membership. Austria has also said it will take border measures to help control the influx. The Schengen travel zone involves 30 nations, including some not in the European Union.

The majority of migrants come from the Middle East and Africa. The turmoil in the Middle East and the five-year war in Syria have led many people to flee the conflict in an attempt to seek security and shelter in more prosperous and peaceful countries. However, Europe has long been slammed for lacking a collaborative response to the crisis. According to the UN, more than 750,000 people have reached Europe so far.

Leaders of the European Union formally launched an emergency trust fund for Africa yesterday with an initial $2 billion to combat the poverty and conflicts driving migration to Europe. The fund, unveiled at a summit with African leaders in Malta, currently consists largely of 1.8 billion euros ($1.93 billion) put up by the European Commission, the EU executive, from the bloc's central budget. The Commission wants member states to match that, but few have pledged much so far.

The new money, which adds to some 20 billion euros annually donated to Africa by the EU and its 28 states, will finance projects ranging from training and small-business grants and combating food shortages to schemes directly aimed at cutting emigration and tackling radicalisation and other violence. With Europeans' attention now gripped by over half a million Syrians and others whose arrival has plunged the EU into crisis, memories have faded of the drowned Africans whose deaths in April prompted the Malta summit. However, EU officials say that African migration presents the greater long-term concern.

Among the biggest concerns in both Europe and Africa is the extent to which climate change, turning vast areas around the Sahara into desert, may set large sections of Africa's fast-growing billion-plus population on the move, both within the continent and north across the Mediterranean. The new EU fund will focus on areas affected by migration and drought in the Horn of Africa, the Sahel and North Africa.

African leaders at the summit in Valletta stressed that its effect would be limited. "The trust fund is not enough. 1.8 billion euros is far from enough," said Mahamadou Issoufou, the president of Niger in the Sahel, which faces serious problems of migration and drought.