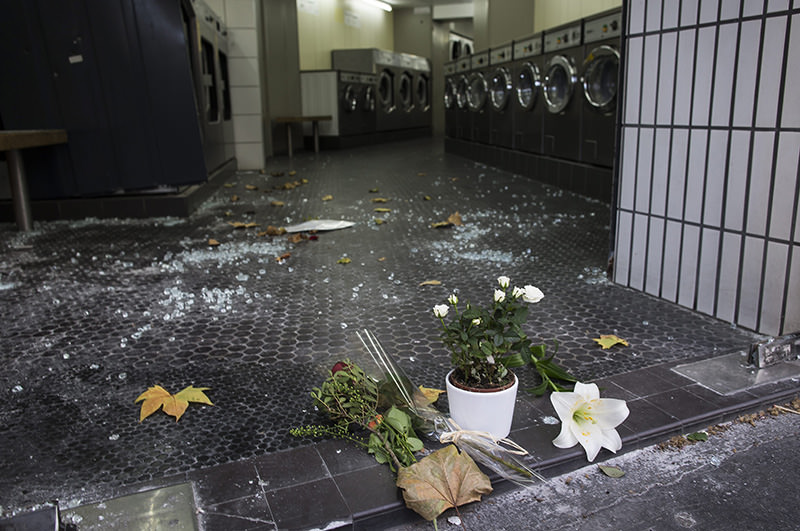 People lay flowers and candles in front of a laundromat near the Casa Nostra restaurant in Paris, France, 15 November 2015 (EPA photo)
by Anadolu Agency
Nov 15, 2015 12:00 am
French police have arrested six family members of one of the assailants suspected of being involved in the gun-and-bomb attacks in Paris that left 129 people dead Friday night, local media reports said Sunday.

French media identified the suspect as French national Omar Ismail Mostefai, who was one of the seven suspected assailants killed in the attacks.

On Saturday, Paris prosecutor Francois Molins said that the attackers split into three groups and carried out the attacks on their targets, Satde de France, Bataclan concert hall and several restaurants in the French capital.

Molins said that the French suspect was born in the Paris suburb of Courcouronnes in 1985. He was known to security services and had a criminal record dated between 2004 and 2006.

Intelligence services reported that he was "radicalized" in 2010.

On Saturday, French President Francois Hollande said ISIS was behind the "act of war" on Paris.

Molins also said that three people were arrested Saturday morning in connection with Paris attacks. One of them, who was arrested at France's border with Belgium, had allegedly rented one of the cars used in the attacks.

French radio Europe1 reported on Sunday that police found one of the two cars used in the attacks in Montreuil, an eastern suburb of the French capital.

The Belgian prosecutor's office has opened an anti-terrorist investigation linked to the Paris attacks and police have made several arrests in the inner Brussels neighborhood of Molenbeek.

Belgian investigations are focusing on a car that had been hired in Belgium and was found near the Bataclan concert hall in Paris, the prosecutor's office said in a statement on Saturday.

Belgian Prime Minister Charles Michel told French radio RTL that at least one of those held was believed to have spent the previous evening in Paris, where two cars registered in Belgium were impounded close to scenes of some of the killings, including the Bataclan concert hall.

According to French media, former French President Nicolas Sarkozy said he urged French president Hollande that there should be "drastic changes" to the country's security policy following the Paris attacks.

Sarkozy called for targeting people who even "look at jihadi websites".

"We need the whole world to destroy ISIS, in particular the Russians. Europe must regroup to set the conditions for a new immigration policy. We must learn the consequences of failures and turn our resources towards all those who look at jihadi websites," he added.

Also, French Prime minister Manuel Valls told reporters outside the Interior Ministry Sunday that "103 bodies of attacks' victims have been identified, while 20 to 30 bodies to be identified in the coming hours."