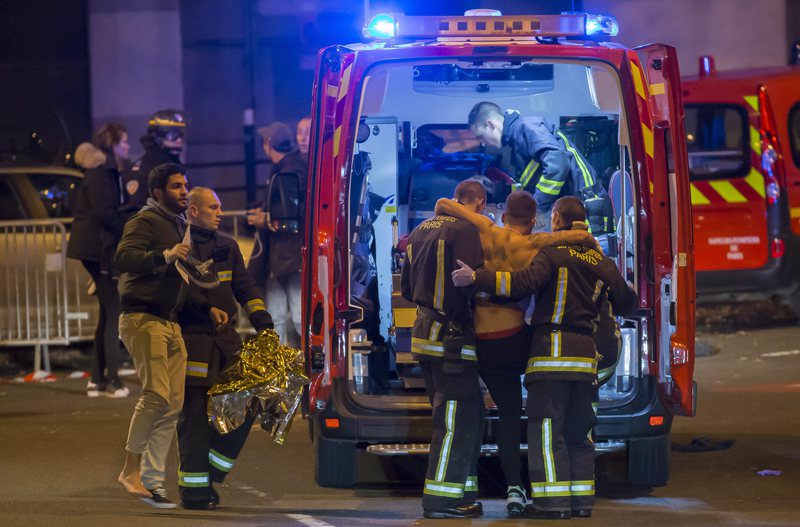 by Compiled from Wire Services Nov 15, 2015 12:00 am
Belgian broadcaster RTL said Brussels police had arrested Salah Abdeslam, a Frenchman wanted in connection with the Paris attacks, during an operation in the Belgian capital on Monday.

French police put out a photo of a fugitive in the Paris attacks on Sunday, saying the suspect was on the run and too dangerous for anyone outside law enforcement to engage directly.

Abdeslam is thought to be directly involved in Friday's attacks, which killed 129 people and wounded hundreds in the worst violence in France in decades, French security officials said.

He is one of three brothers believed to be involved in the killings; one was arrested in Belgium and another died in the attack, the first official said.

Abdeslam rented the black Volkswagen Polo used by the group of hostage-takers that left at least 89 people dead inside the Bataclan, another official said. Both spoke on condition of anonymity because the investigation is ongoing.

Belgium issued an international arrest warrant late Sunday for one of three brothers that are thought to have played a role in the Paris terrorist attacks, prosecutors said.

The suspect lived in the Brussels neighbourhood of Molenbeek, the source added. 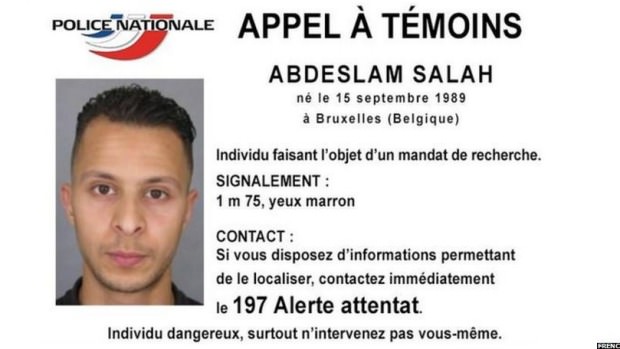 Seven people were detained Sunday in Belgium in connection with deadly attacks in Paris as the city entered three days of mourning for the 129 people killed in the worst violence in France in decades.

French troops deployed by the thousands and tourist sites were shuttered in one of the most visited cities on Earth as more details of the investigation emerged.

The Daesh group claimed responsibility for Friday's gun and bomb attacks on a stadium, a concert hall and Paris cafes that also wounded 350 people, 99 of them seriously.

As many as three of the seven suicide bombers who died in the attacks were French citizens, as was at least one of the men arrested in neighboring Belgium.

A French police official said a suicide attacker identified by a skin sample was believed to be living in the Paris suburbs before the attacks. A Belgian official said two of the seven people wired with suicide vests were French men living in Brussels, and among those arrested was another French citizen living in the Belgian capital.

The new information stoked fears of homegrown terrorism in a country that has exported more jihadis than any other in Europe. All three gunmen in the January attacks on the Charlie Hebdo newspaper and a kosher supermarket in Paris were French.

This time, three teams of attackers were involved and seven suicide bombers blew themselves up three near the stadium, three at the concert hall and one not far from it, authorities said.

A Brussels parking ticket found inside the Volkswagen Polo parked outside the Bataclan concert hall led to one of the men arrested in Belgium, according to a French police official.

Three Kalashnikovs were found inside the other car known to have been used in the attacks, a Seat found in Montreuil, a suburb 6 kilometers (nearly 4 miles) east of the French capital, according to the police official, who could not be named because the investigation is ongoing.

Another official in Belgium said the seven people detained would learn later Sunday whether they would be held in custody longer. Three other people were arrested there Saturday.

That official, who spoke on condition of anonymity due to the ongoing investigation, also said two of the seven attackers who died in Paris on Friday night were French men living in Brussels. He said one was living in the Molenbeek neighborhood, which is considered a focal point for religious extremism and fighters going to Syria.

Security was heightened across France, across Europe's normally open borders, even across the ocean in New York, and how to respond to the Paris attacks became a key point among U.S. Democratic presidential hopefuls at a debate Saturday night.

President Barack Obama on Sunday called the terror attacks in Paris an "attack on the civilized world."

Obama, speaking at the G-20 summit in Turkey focusing on fighting terrorism, pledged U.S. solidarity with France in the effort to hunt down the perpetrators and bring them to justice.

At the request of France, the European Union will hold a special meeting of its interior and justice ministers Friday to assess the impact of the Paris attacks.

Streets, parks and commerce were unusually empty for such a mild, clear day, and several city monuments were closed for security reasons or to express the city's grief.

Some Parisians and tourists defied the high security, walking past heavily-armed soldiers in body armor to take pictures beneath the Eiffel Tower.

In its statement claiming responsibility, the Daesh group called Paris "the capital of prostitution and obscenity" and mocked France's air attacks on suspected Daesh targets in Syria and Iraq.

A French survivor of the rampage at Paris' Bataclan concert hall said he was struck by how young the attackers were.

Julien Pearce, journalist at Europe 1 radio, was at the Bataclan concert hall on Friday to attend the concert by the American rock band Eagles of Death Metal. He said when the three attackers stormed in "it took me few seconds to realize it was gunshots."

Pearce and his friends immediately got down on the floor to avoid the random shots, then ran and crawled into a tiny dark room next to the stage.

"There was no exit, so we were just in another trap, less exposed, but still a trap," he said.

Pearce said he could discreetly look out and see one of the assailants. He says "he seemed very young. That's what struck me, his childish face, very determined, cold, calm, frightening."

Once the attackers paused to reload, his group ran across the stage to the emergency exit, helping a wounded woman out. Looking back, he saw "dozens and dozens of entangled, bullet-riddled bodies in a pool of blood." Eighty-nine people were killed at the hall.

Film producer David Pierret, who survived the attack, said he was sitting on the terrace of the Carillon bar with friends when assailants suddenly started firing Kalashnikov assault rifles.

"By some miracle I was on the far side. My neighbor will have been killed," he said. "Immediately we ran down to the Canal Saint Martin. But they followed. It must have been in a car. We didn't look back. They were firing in the direction of the canal. We ran all the way round to the McDonald's, they were firing at McDonald's. We ran around again back to the Carillon and that's when I saw the bodies on the ground," he said.

"I didn't know if they were male or female. There was a very strange long silence, and then screaming."

President Francois Hollande has said that France, which is already bombing Daesh targets in Syria and Iraq in a U.S.-led coalition, would increase its military efforts to crush IS and be "merciless" against the extremists.

French authorities are particularly concerned about the threat from hundreds of French radicals who have traveled to Syria and returned home, possibly with dangerous skills.

Details about one attacker began to emerge: 29-year-old Frenchman Ismael Mostefai, who had a record of petty crime and had been flagged in 2010 for ties to Islamic radicalism. He was identified from fingerprints found on a finger amid the carnage from a Paris concert hall, the Paris prosecutor said. A judicial official and lawmaker Jean-Pierre Gorges confirmed his identity.

Police detained his father, a brother and other relatives Saturday night, and they were still being questioned Sunday, the judicial official said.

Struggling to keep his country calm and united after an exceptionally violent year, Hollande met Sunday with opposition leaders conservative rival and former President Nicolas Sarkozy as well as increasingly popular far-right leader Marine Le Pen, who has used the attacks on Paris to advance her anti-immigrant agenda.

On the streets, the entire nation was enveloped in mourning. Flags were lowered and Notre Dame Cathedral closed to tourists like many Paris sites planned a special church service later Sunday for victims' families. Well-wishers heaped flowers and notes on a monument to the dead in the neighborhood where attackers sprayed gunfire on cafe diners and concert-goers.

Quentin Bongard said he left one of the targeted cafes after a fight with his girlfriend just moments before the attacks. They both narrowly escaped because she had gone inside to pay and hid behind a couch.

"Those are all places that I go often to," the Paris resident said, still shaken. "We just want to come here, bring flowers, because we don't want to be terrorized ... but it is frightening."

Even in their grief, residents were defiant about maintaining the lifestyle that has made their city a world treasure. Olivier Bas was among several hundred who gathered late Saturday at the site of the Bataclan hall massacre. Although Paris was quiet and jittery, Bas intended to go out for a drink "to show that they won't win."

Meanwhile, refugees fleeing to the continent by the tens of thousands feared that the Paris attacks will prompt EU nations to put up even more razor-wire border fences and other obstacles to their quest to start a new life.

A Syrian passport found next to the body of one of the men who attacked France's national stadium suggested that its owner passed through Greece into the European Union and on through Macedonia and Serbia last month. It's a route tens of thousands of people fleeing war and poverty in Syria and elsewhere have been using.

A top European Union official insisted Sunday that the bloc's refugee policy doesn't need to be overhauled in the wake of the Paris attacks and urged world leaders not to start treating asylum-seekers as terrorists.

"Those who organized these attacks, and those who carried them out, are exactly those who the refugees are fleeing," European Commission President Jean-Claude Juncker told reporters at the G-20 summit in Turkey. "There is no need to revise the European Union's entire refugee policy."