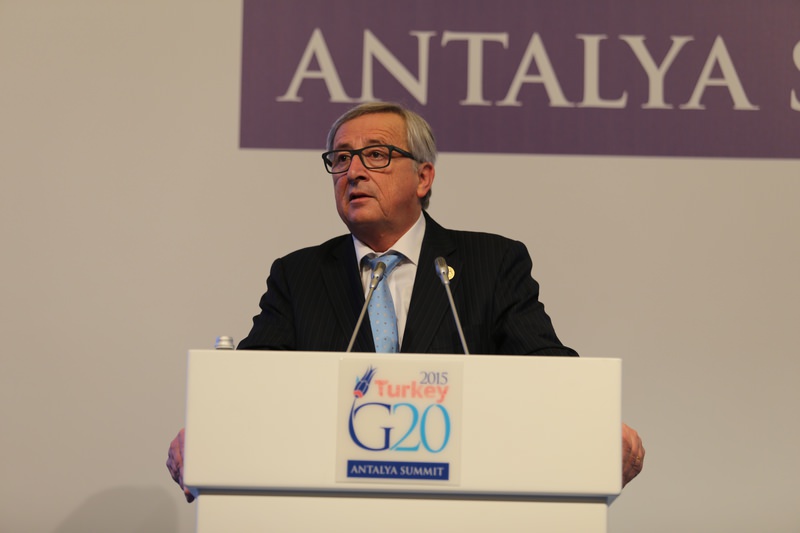 by Daily Sabah with Wires Nov 16, 2015 12:00 am
European Commission President Jean-Claude Juncker firmly defended Sunday the EU's plan to redistribute refugees across Europe after several European nations poured cold water on the plan in the wake of the terrorist attacks in Paris, with some refusing to accept refugees and some increasing border controls, which may lead to the collapse of the Schengen zone.

Right after the deadly attacks in Paris, France declared a state of emergency and a border closure. Meanwhile, the head of Germany's domestic intelligence services called for "orderly procedures" regarding the handling of the daily entry of thousands of refugees to Germany, saying extremists could exploit the sometimes chaotic migration situation.

The top European Union official insisted that the bloc's refugee policy does not need to be overhauled in the wake of the Paris attacks and urged world leaders not to start treating asylum seekers as terrorists. "Those who organized these attacks and those who carried them out, are exactly those who the refugees are fleeing," Juncker told reporters at the G20 Summit in Turkey.

"The one responsible for the attacks in Paris... he is a criminal and not a refugee and not an asylum seeker," Juncker said.

Poland's incoming government declared Saturday it would not accept refugees without security guarantees but Juncker urged them "to be serious about this, and not to give in [to] these basic reactions."

Interior Minister Thomas de Maiziere and Economy Minister Sigmar Gabriel have both warned against making any hasty links between the deadly Paris attacks and the refugee debate. Sigmar Gabriel says those seeking refuge in Europe shouldn't be made to suffer just because "they come from those regions where terror is being exported to us and to the world." Gabriel said "we stand to protect them too, and to ensure that they don't have to suffer because murderers in France are threatening people and Europe in the name of a religion."

Switzerland's Defense and Civil Protection Minister Ueli Maurer said yesterday that the country needs to improve its border controls in the wake of the attacks in Paris. Switzerland had said on Saturday it would intensify border security, but gave few details. "I am in favor of strengthening our [border] controls," Maurer said in an interview with SonntagsBlick. "Until now that was a taboo politically. But now the measure of reintroducing border controls is necessary." The minister, who said the attacks in Paris did not come as a surprise to him, sits on Switzerland's seven-member governing council and is a member of the anti-immigration Swiss People's Party (SVP).