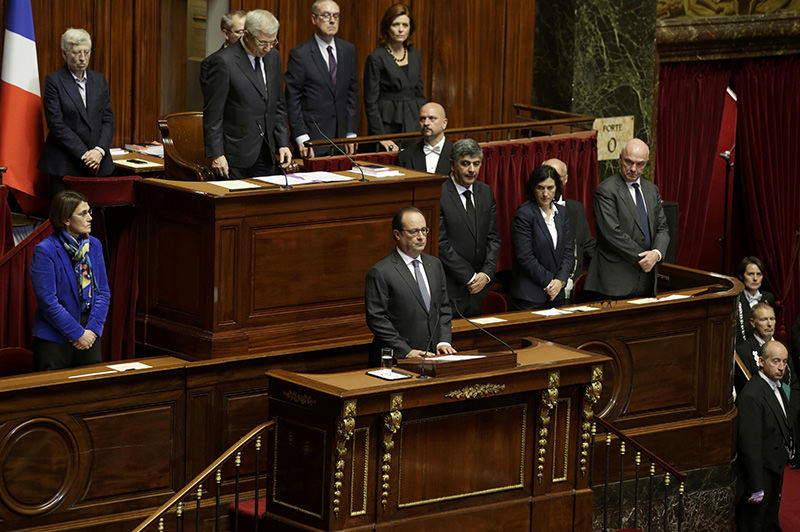 by Daily Sabah Nov 16, 2015 12:00 am
France has ramped up strict security measures in response to one of its worst terror attacks since World War II. Fear, confusion and sorrow are still palpable on the streets of Paris with a recent false alarm sparking anxiety that speaks to a people very much on edge and in a state of shock.

France will step up strikes in Syria where Friday's shootings and suicide bombings in Paris had been planned, President François Hollande said on Monday in an extraordinary address to both houses of parliament, National Assembly and Senate. Hollande called on the United Nations Security Council to rapidly issue a resolution against terrorism.

Hollande said that security measures will increase spending; however, security is more important than EU's budget rules. He added that 5,000 police jobs will be created within two years and no job cuts will be made in the military until 2019.

A national state of emergency has been imposed following the attacks. Under the law, France's Council of Ministers decides to put the country in a state of emergency by decree for a maximum of 12 days. Hollande said he wants the measure extended by three months.

French troops have been deployed by the thousands and tourist sites have been shuttered in one of the most visited cities on Earth as more details of the investigation emerge.

French police and troops were on the streets of Paris yesterday, too. Around 104 people have been placed under house arrest since Saturday, the French Interior Ministry said. More than 168 raids were carried out, leading to 23 arrests and the confiscation of 31 weapons. Six people close to one of the gunmen, including a father, brother and sister-in-law, were among them.

Shops, cafes and restaurants have imposed stricter measures. A resident of Paris said even the pockets of her jacket were searched when she was trying to get into a cafe in the city, which she said shows the panic and anxiety among ordinary people.
Last Update: Nov 16, 2015 6:04 pm
RELATED TOPICS