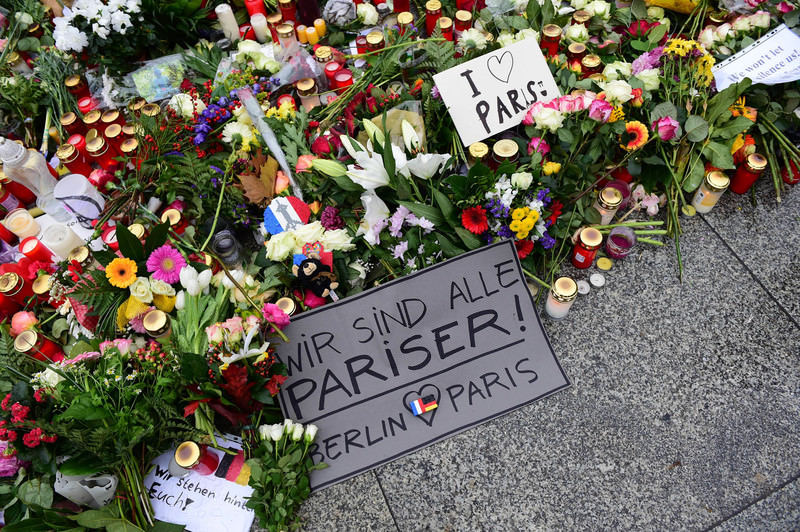 A message reads , We are all Parisians - Berlin loves Paris , amount flowers and candles on the ground outside the French embassy in Berlin, on November 16, 2015. (AFP Photo)
by Anadolu Agency Nov 16, 2015 12:00 am
The Turkish Muslim community in Berlin denounced Friday's terrorist attacks in Paris, while urging unity against terrorism and voicing concern over backlash against refugees and immigrants.

Representatives of nine Turkish Muslim NGOs paid tribute to the victims, laying flowers at a candlelight vigil outside the French embassy in Berlin.

"These attacks have targeted not only Western values, but also all of humanity," he said.

The NGOs urged unity against terrorism and called for a stronger stance against those who incite hate and violence.

They also expressed concern over growing propaganda of far-right and populist movements against refugees.

"We cannot allow these attacks to be exploited to incite hostility against asylum seekers or various groups," they said in the joint statement.

The largest union of Turkish immigrants in Germany, the Turkish-Islamic Union for Religious Affairs (DITIB), the Union of European Turkish Democrats (UETD) and Turkish Community in Berlin (TGB) have signed the joint statement.

Germany has the second-largest Muslim population in western Europe after France. Among the four million Muslims in the country, three million are of Turkish origin.
Last Update: Nov 16, 2015 8:39 pm
RELATED TOPICS