A first since World War II: Russia-France cooperation against DAESH 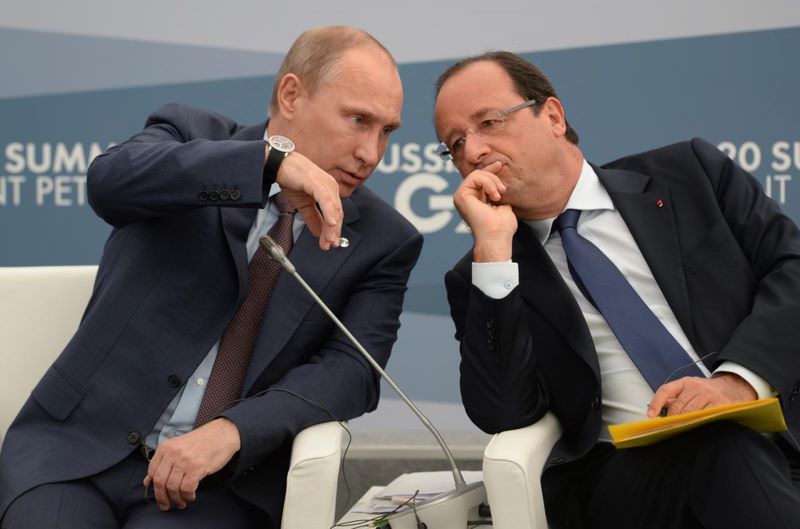 by Daily Sabah with AFP
Nov 17, 2015 12:00 am
Russian President Vladimir Putin's call to his navy to cooperate with the French "as allies" could mark the first time since World War II that Paris and Moscow jointly fight a common foe.

Putin's announcement comes after at least 129 people were killed in Friday's simultaneous terror attacks in Paris, prompting France to ramp up its strikes against the DAESH terrorist organization in Syria.

The Kremlin -- which confirmed Tuesday that the Russian plane that crashed in Egypt's Sinai peninsula in late October had been downed by a bomb on board -- meanwhile has pushed for the creation of a broad coalition against DAESH involving Russia, the West and some Middle Eastern states, despite lingering differences over the fate of Syrian President Bashar al-Assad.

"We have to remember [...] World War II when they [France and Russia] fought against a common enemy that was threatening to destroy all of humanity," said Mikhail Myagkov, the head of research at the Russian Military Historical Society.

"This has become as relevant as ever when we are fighting a common enemy in the form of DAESH."

Russian historians say the visit of French leader Charles de Gaulle to the Soviet Union in 1944 cemented France's role in the reconstruction of the post-war world and was effectively the last time Paris was involved in a military alliance with Moscow.

"During World War II, Nazism forced the USSR and the West to overlook their ideological differences. Will the DAESH become the new Hitler?" an op-ed in Russian daily Vedomosti asked.

After the fall of the Soviet Union, France and Russia cooperated on various peacekeeping missions, including in the former Yugoslavia in the 1990s.

Russian vessels have also taken part in European-led anti-piracy efforts off the coast of Somalia as part of Operation Atalanta.

A Russo-French joint action plan against the DAESH group would also a first in the history of Russia's interactions with NATO, which even in times of crisis -- including after the 9/11 attacks in the United States -- remained largely logistics-based.

But Kremlin spokesman Dmitry Peskov remained cautious about the prospect of a broad anti-DAESH coalition, saying it was "too early" to talk about this.

French President Francois Hollande was the first Western leader to visit Putin in Russia after the outbreak of the Ukrainian crisis -- a move interpreted as an attempt to reach out to the ostracised Russian leader -- but ties have remained strained.

France cancelled the delivery of two of its Mistral warships to Russia as relations plunged to Cold War-era lows over Moscow's annexation of Crimea and support for separatists in eastern Ukraine, with Paris selling the ships to Egypt instead.

France's Defence Minister Jean-Yves Le Drian and the army Chief of Staff Pierre de Villiers have had no contact with their Russian counterparts since start of the Ukrainian crisis which saw some Russian military officials slapped with EU sanctions, a French source told AFP.

Political analyst Konstantin Kalachev, the head of a Moscow-based think tank, said Russia's rapprochement with France over Syria would help Putin muscle his way back onto the centrestage of world politics after months of isolation over the Ukraine crisis.

"France has just had a terrorist attack and Russia had a terrorist attack. The roots of these attacks are the same," Kalachev told AFP, saying that the Paris attacks could serve as a catalyst for the creation of the broad anti-DAESH coalition Putin has been striving to create.
Last Update: Nov 18, 2015 12:10 am