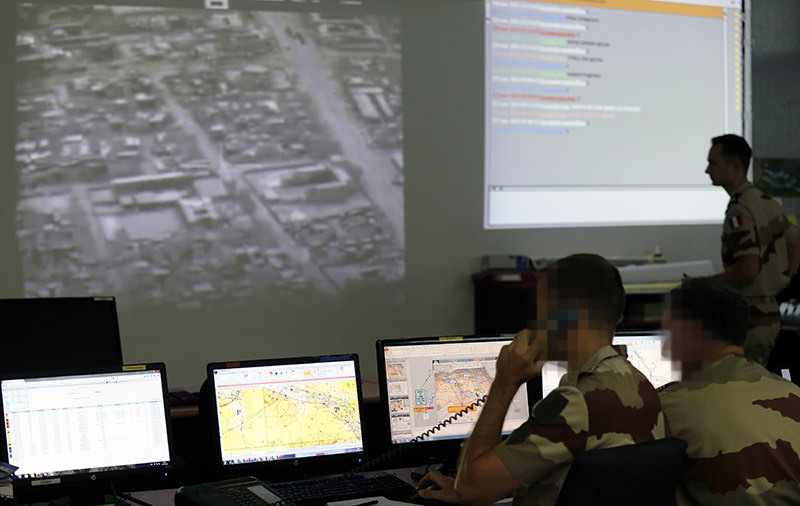 Soldiers sit in control room at French military base at an undisclosed location in the Gulf on Nov 17, 2015, as they monitor operations against DAESH in Syria, Iraq (AFP photo)
by Compiled from Wire Services
Nov 17, 2015 12:00 am
France made an unprecedented demand on Tuesday for its European Union allies to support its military action against DAESH as it launched new airstrikes on the militants' Syrian stronghold just days after DAESH-linked terrorists killed at least 129 people in Paris.

France invoked a never-before-used article of the EU's Lisbon Treaty obliging members of the 28-nation bloc to give "aid and assistance by all the means in their power" to a member country that is "the victim of armed aggression on its territory."

Meanwhile, French police conducted 128 new raids overnight across the country, Interior Minister Bernard Cazeneuve said on Tuesday. On Monday, 168 raids across France resulted in the arrest of 23 people and the seizure of 31 weapons, including a rocket launcher in Lyon. Another 104 people were placed under house arrest and six people have been stripped of their citizenship because of links to terrorism since the beginning of the year, according to Cazeneuve.

French and other Western intelligence agencies face an urgent challenge to track down the surviving members of the three DAESH units who inflicted the unprecedented bloodshed in France and, perhaps more importantly, to target their distant commanders in DAESH-controlled parts of Syria.

Police have launched a massive manhunt for Salah Abdeslam, 26, one of two Belgium-based brothers implicated in the attacks. His sibling, Brahim, blew himself up outside a bar in Paris, seriously wounding one person. Investigators believe Belgian extremist Abdelhamid Abaaoud, who is based in Syria and knew Salah Abdeslam, may be the mastermind of the attacks.

Abaaoud has boasted in videos about planning attacks in Europe, and was in July sentenced to 20 years in absentia in Belgium over a thwarted plot to murder police officers. "We don't know if there are accomplices in Belgium and in France... we still don't know the number of people involved in the attacks," French Prime Minister Manuel Valls said.

Five of the seven gunmen and suicide bombers killed during the attacks have already been identified. Four of them are French nationals, and at least two of them are known to be among the hundreds of French people who have gone to fight in Syria. The return of such radicalized, war-hardened extremists has put a heavy strain on the security forces, who have come under the spotlight after the second mass terror attack in 10 months.

Meanwhile, French military spokesman Col. Gilles Jaron said the latest airstrikes in Raqqa destroyed a command post and training camp. Hollande said the French aircraft carrier Charles de Gaulle would be deployed to the eastern Mediterranean to "triple our capacity to take action" against DAESH in Syria. On Monday, President Francois Hollande vowed to forge a united coalition capable of defeating the extremists at home and abroad. And after Hollande urged global unity to crush the extremists, U.S. Secretary of State John Kerry flew to Paris to show solidarity with his nation's "oldest ally." "We agreed to exchange more information and I am convinced that over the course of the next weeks, DAESH will feel greater pressure," Kerry said after talks with Hollande.
Last Update: Nov 17, 2015 4:00 pm