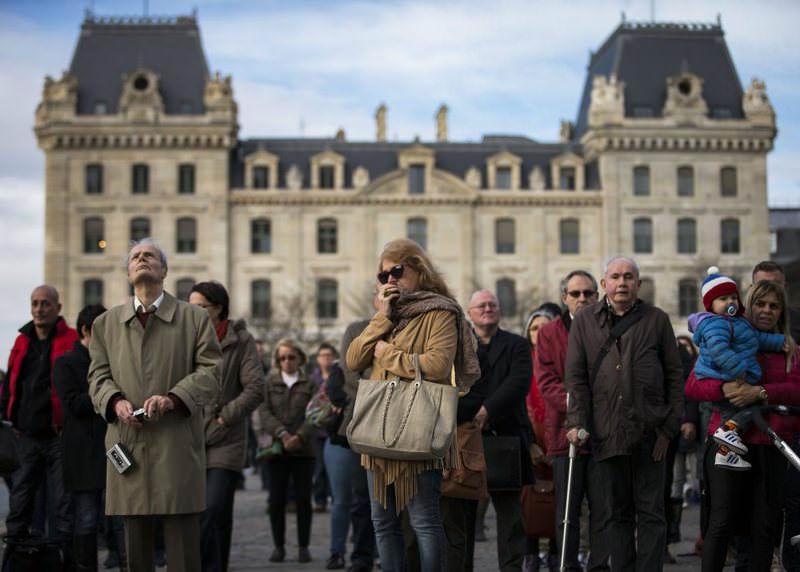 People gather to hold a minute of silence in front of the Notre-Dame Cathedral in Paris.
by Daily Sabah with Wires
Nov 17, 2015 12:00 am

With France hit by its worst terror attack since World War II, French police have applied extraordinary measures in dozens of raids on suspected extremists across the country. As the attackers are gradually identified, Paris fell silent for a minute on the final day of national mourning

French police have carried out more than 160 raids on suspected extremists since the attacks on Paris, the French interior minister said yesterday, as authorities released the names of two more potential suicide bombers involved in the Paris attacks, with one born in Syria, the other a Frenchman wanted as part of a terrorism investigation.

French Prime Minister Manuel Valls said yesterday that the terrorist attacks in Paris were "organized, thought out, planned out of Syria," as prosecutors said that one of the suicide bombers could possibly have come from the war-torn Middle Eastern country.

Police sources in Paris said "several dozen" pre-dawn raids were carried out in French cities yesterday, including in Bobigny, an eastern suburb of the capital. Thirteen raids were carried out around the southeastern French city of Lyon, a local police source said, where an arsenal of weapons had been seized. They led to five arrests and the seizure of "an arsenal of weapons," including a rocket launcher, a Kalashnikov assault rifle, bulletproof vests, handguns and combat gear, the source said. Police also carried out raids in Toulouse in southwestern France, where at least three people were arrested, according to the local prosecutor's office.

Police have additional powers under a state of emergency declared after the coordinated attacks in Paris on Friday that left 129 people dead and more than 350 injured, 99 of them seriously. There have been 23 arrests in the wake of the terrorist attacks in Paris and police conducted 168 raids overnight, French Interior Minister Bernard Cazeneuve said yesterday. Cazeneuve said 104 people were under house arrest.

Police have named just two French attackers - Ismael Omar Mostefai, 29, from Chartres, southwest of Paris, and Samy Amimour, 28, from the Paris suburb of Drancy. Media named the two other French assailants as Bilal Hadfi and Ibrahim Abdeslam. The man stopped in Greece in October was carrying a Syrian passport in the name of Ahmad Al Mohammad. Police said they were still checking to see if the document was authentic, but said the dead man's fingerprints matched those on record in Greece.

Another police operation was launched in the Belgian capital Brussels. The operation in the neighborhood of Molenbeek had been aimed at capturing Salah Abdeslam, a 26-year-old Frenchman born in the Belgian capital for whom an international arrest warrant has been issued. Abdeslam is one of three brothers believed to be involved; One who crossed with him into Belgium was later arrested, and another blew himself up inside the Bataclan theater after taking the audience hostage and firing on them repeatedly. It was the worst of Friday's synchronized attacks, leaving 89 fatalities and hundreds of people wounded inside. In all, three teams of attackers including seven suicide bombers attacked the national stadium, the concert hall and nearby nightspots.

Meanwhile, French President Francois Hollande addressed the French parliament yesterday and said the EU must do more to control its external borders, otherwise "there would be return to national borders and it will be [the] deconstruction of the EU." Hollande emphasized that "France is at war with cowards" and will intensify its operations in Syria. He added that the Paris attacks were planned in Syria and launched from Belgium with French help.

Across France and other countries people observed a minute's silence at noon yesterday in memory of the victims of the worst attack on French soil since World War II. In Paris, President Francois Hollande and his cabinet, all dressed in black, bowed their heads at the Sorbonne University, surrounded by scores of students. Crowds gathered at a makeshift monument at Republique Plaza in a neighborhood targeted by the attacks, where a banner reads "Can't Scare Us." Large crowds also gathered in silence by the Bataclan music venue where 89 people died and outside a nearby bar and restaurant where 15 people were slain, AFP correspondents said.

Meanwhile, Muslims in France, who fear they may be targeted because of the attacks, also called for unity. The rector of the Great Mosque of Paris called on all French imams on Monday to lead the faithful in Friday prayers for the victims of the country's worst ever terror attacks. "I appeal to imams to take part in a solemn prayer to show our compassion and share in the families' sorrow," rector Dalil Boubakeur told reporters.