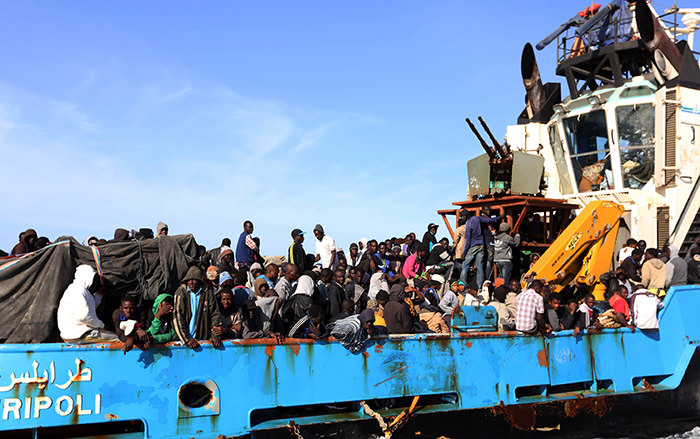 A Libyan coastguard boat carrying around 500 mostly African migrants arrive at the port in the city of Misrata on May 3, 2015 (AFP Photo)
by reuters
Nov 18, 2015 12:00 am
Around 20 African refugees are missing at sea after their boat sunk in the Atlantic Ocean around 20 miles off the coast of Western Sahara, Spanish sea rescue services said on Wednesday.

Spanish lifeguards rescued 22 African men from the sea late on Tuesday in stormy conditions and recovered the corpse of one man. The search continues for the remaining refugees.

Survivors say there were over 40 people travelling in the boat, including one woman, the sea rescue services spokesman said.

Photographs showed the survivors being transferred from the rescue boat to Gran Canaria island where they were attended to by Red Cross workers in makeshift tents set up in the port.

The sea route from West Africa to Spain's Canary Islands was a major route for refugees attempting to enter Europe until about 10 years ago when Spain stepped up patrols.
Last Update: Nov 18, 2015 4:45 pm