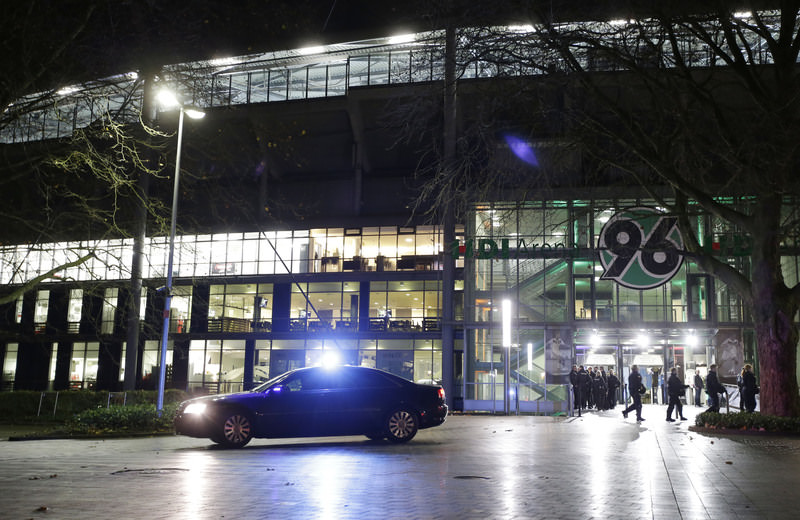 by Daily Sabah with Wires
Nov 18, 2015 12:00 am
Germany-Netherlands friendly match was canceled and the Hannover HDI-Arena hosting the game was evacuated late Tuesday by German security forces.

According to security sources, the cancellation of the match was declared in an announcement.

A second stadium in the northern German city of Hannover has been evacuated.

Concert-goers had been waiting for the band "Soehne Mannheims" to play.

Germany's top security official said the decision to cancel the soccer match between Germany and the Netherlands was made after authorities received mounting information during the course of the day about a possible attack.

Interior Minister Thomas de Maiziere told reporters he wouldn't name the source of the information that led to the match in Hannover being called off shortly before it was to take place. German Chancellor Angela Merkel had been among the top Germany officials scheduled to attend.

The German news agency dpa cited unnamed security officials in Berlin that a foreign intelligence agency had warned Germany of a possible attack by DAESH.

Before the announcement, police briefly sealed off the stadium staging the friendly between Germany and the Netherlands after finding a suspicious suitcase.

A reporter was not let into the stadium about two hours before the kickoff on Tuesday. Fans were also held back.

Police spokeswoman Stephanie Weiss said a suspicious object was found at the stadium. Police later opened the doors and fans started coming in. After a while, the officials decided to cancel the match and the stadium was evacuated by the security forces.

German Chancellor Angela Merkel and several cabinet ministers were expected to attend the match, which comes four days after the attacks in Paris claimed by the DAESH terrorist organization in which 139 died and hundreds more wounded.

Germany was playing France in a friendly during the attacks. Suicide bombers sought unsuccessfully to enter the Stade de France and blew themselves up outside.