Italy launches hunt for Daesh suspects after tip-off from US 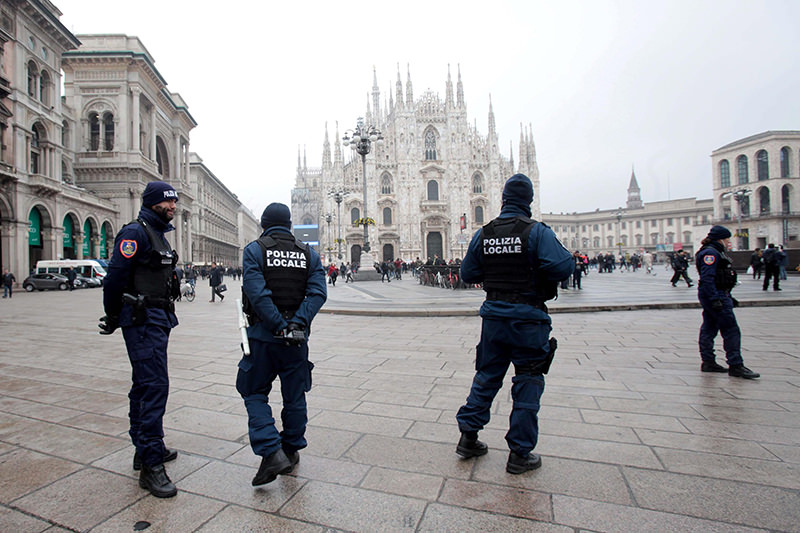 Local police officers patrol near the Duomo in Milan, Italy, 19 November 2015. Security has been beefed up in Milan following the 13 November Paris attacks and an FBI security alert (EPA Photo)
by Nov 19, 2015 12:00 am
Italy is looking for five terror suspects after a tip-off from the United States about possible terrorist attacks on tourist sites in Rome and Milan, Foreign Minister Paolo Gentiloni said Thursday.

The US embassy, meanwhile, posted a security warning on its website identifying some of Italy's best-loved landmarks as "potential targets."

"Since yesterday afternoon, our security forces have been working to find five people," Gentiloni told Rai 3 television, without elaborating.

Earlier, Italian media said the US Federal Bureau of Investigation (FBI) had provided five names to the Italian authorities but the agency did not give specific details on any plots.

Gentiloni stressed Italy was already primed for the possibility of an attack on St Peter's Cathedral in the Vatican, or other historic monuments such as the Duomo and La Scala theatre in Milan.

"The minister of the interior has explained many times that we are at a very high level of alert covering symbolic sites, places where people gather, from stadiums to cathedrals, and St Peter's in particular, which were, among others, the places highlighted by the FBI yesterday," Gentiloni said.

"We always take such signals of alarm very seriously, especially when they come from the United States."

A security notice posted on the website of the US embassy in Rome said that St Peter's, La Scala and the Duomo in Milan had been identified as "potential targets" and said churches, synagogues, restaurants, theatres, and hotels in both cities were "possible targets."

"The Italian authorities are aware of these threats. US citizens are advised to remain vigilant and aware of their surroundings."

Gentiloni stressed that this did not amount to formal advice to Americans not to travel to Italy -- a step which would have serious repercussions for the country's large tourist industry -- but a simple reminder of the need to be vigilant.

He also appealed to the media not to stoke public fears. "We must not become prisoners of this alarm because that would be a gift to Daesh," he said.

Italy reacted to last week's attacks on Paris by deploying 700 extra troops in Rome, on top of 1,300 already involved in a highly-visible "safe streets" operation.

The additional soldiers have been deployed notably on the capital's underground rail network and at major shopping centers while media reports have suggested the number of sites identified as possible targets has been increased from 90 to 150.

Extra troops have been deployed to train stations and airports while security around Pope Francis has also been significantly enhanced with additional checks on people entering the Vatican and an increased number of bodyguards on duty when he did his weekly appearance in St Peter's square on Wednesday.

Italian media have, in recent months, regularly given high prominence to vague warnings from Islamic State propagandists that they will come to Rome and plant their flag on top of St Peter's.

Officials have generally played down such threats, insisting they had no knowledge of a specific or credible plot to attack Rome or the Vatican.

Italy has a smaller problem with homegrown terrorists than other Western European countries. Intelligence experts estimate only around 50 Italian residents have gone to fight with Daesh in Syria and suspected militants appear to be closely monitored.

Interior Minister Angelino Alfano revealed on Tuesday that 55 suspected terrorists had been expelled from Italy since the start of the year, including four imams.

Security services have been on high alert since last Friday because of the possibility that individuals involved in the Paris killings could flee to Italy.

Media reports said police had checked a number of 'Bed and Breakfasts' in Rome on Wednesday, looking for a suspect wanted by the French authorities.