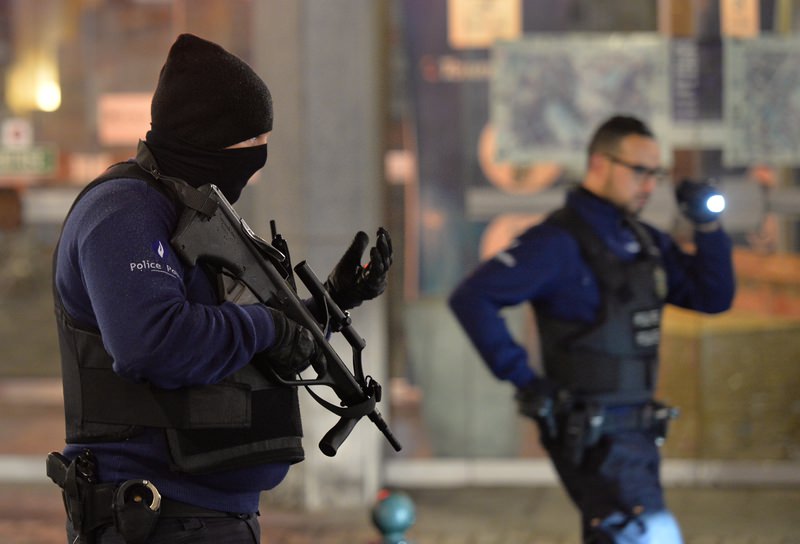 The EU capital Brussels woke up to the third day of a security lockdown on Monday with soldiers patrolling the streets. Belgian police arrested 16 people overnight, but, Paris fugitive Salah Abdeslam has not yet been found

Brussels began a third consecutive day in lockdown under a maximum terror alert on Monday after Belgian police staged a series of raids but failed to find key Paris attacks suspect Salah Abdeslam. In an unprecedented security operation for the European capital, museums, schools, universities and the metro were shut in the face of what Prime Minister Charles Michel called a "serious and imminent" threat of attacks similar to those that killed 130 people in France. In Paris, Britain's Prime Minister David Cameron accompanied French President François Hollande in a quiet visit to the Bataclan concert hall, where 90 people died in by far the bloodiest of the string of attacks claimed by DAESH.

Cameron said on his Twitter account he stood "shoulder to shoulder" with Hollande at the venue, where a British man was among the dead on Nov. 13.

Federal prosecutor Eric Van Der Sypt said Belgian police carried out 19 raids on Sunday in Molenbeek, home to many of the Paris attackers, and other boroughs of Brussels, and three raids were carried out in Charleroi, detaining 16 people. Abdeslam was not among those arrested, Eric Van Der Sypt told reporters just after midnight, meaning Europe's most wanted man remains at large. Abdeslam's elder brother Brahim blew himself up outside a Paris bar in the Nov. 13 attacks and the 26-year-old is suspected of playing a key role in the massacre. Van Der Sypt said no firearms or explosives were found. Belgian Interior Minister Jan Jambon told the RTL network that Abdeslam "must have a lot of support on our territory. That's why all these searches being conducted at the moment are important."

Police fired two shots at a car that approached them as they searched a snack bar in Molenbeek, Van Der Sypt said. The vehicle escaped but was stopped later in Brussels, and a wounded person inside was arrested. It was not immediately known if the person was linked to the investigation into the Paris attacks. Armed officers and troops patrolled the near-deserted streets of the tense Belgian capital all weekend after the government raised the terror alert to the highest level of four in the city. Early on yesterday morning, traffic was relatively light in the center of the city and many people opted to cycle to work although most buses were running.

The Brussels-based European Union and NATO both said they would bolster security and urged non-essential staff to work from home yesterday. Michel said the Brussels metro system would remain shut and schools and universities would be closed over concerns that extremists were plotting a repeat of the Paris gun and suicide bombing attacks on November 13. "What we fear are similar attacks, with several individuals in several places," Michel told reporters. "The threat is considered serious and imminent," he said, adding that the rest of the country, including Brussels airport, would remain on security alert level three, meaning an attack is considered possible and the threat credible. Interior Minister Jan Jambon earlier said the authorities were looking for "several suspects" and not just for Abdeslam, who is thought to have slipped past French security forces after the Paris attacks. "The operation is not finished. We will continue until we clean up this mess," Jambon told Belgian radio yesterday. French police meanwhile released a photo of the third of three men who blew themselves up outside France's national stadium during the rampage. The man in the picture passed through Greece with one of the other suicide bombers, carrying a Syrian passport in the name of Mohammad al-Mahmod, a source close to the investigation said.

Hollande embarked on a diplomatic offensive in a bid to forge a broad anti-DAESH coalition. After talks with Cameron, the French leader was due to meet U.S. President Barack Obama and then Germany's Angela Merkel and Russia's Vladimir Putin on the subsequent three days. The U.N. Security Council on Friday authorized "all necessary measures" to fight extremist violence after a wave of deadly attacks, including the downing of a Russian aircraft in Egypt with the loss of 224 lives and the storming of a luxury hotel in Mali that left 19 dead. Meanwhile, Germany has kept security along its border with Belgium at a high level since the Paris attacks, a German police spokesman said after media reports that Abdeslam was spotted near the frontier. Several Belgian media carried unsourced reports saying he had been seen in a car near the eastern city of Liege heading towards Germany. There have been numerous reported sightings in recent days. "Intensive border security measures have been in place since last week," the German police spokesman told Reuters. On Nov. 13, France was hit by its worst terror attack since World War II. At least 130 people died, and more than 350 were wounded, with dozens still in critical condition. Europe got alarmed after the attacks with extra security measures and re-instating of border checks at the internal borders of the EU, which may bring Schengen at risk and make it harder for refugees who seek a safe haven after fleeing violence to get European countries.
Last Update: Nov 23, 2015 8:22 pm
RELATED TOPICS