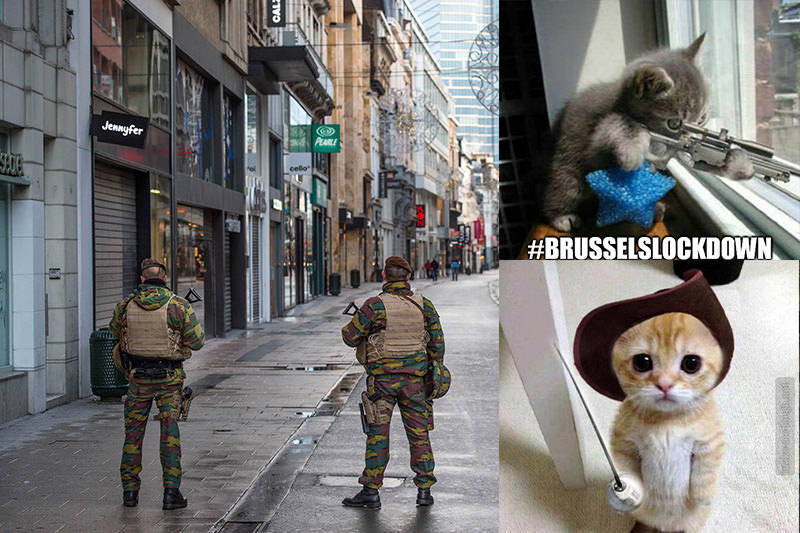 Belgian soldiers patrol in Rue Neuve, the busiest shopping street in Brussels, now empty, 22 November 2015 (EPA photo)
by Nov 23, 2015 12:00 am
When Belgian police requested social media silence during a series of anti-terrorism raids on Sunday, they might have expected a catty response from the Internet.

In fact people politely complied but with a surreal twist, as thousands tweeted pictures of their feline friends when the hashtag #BrusselsLockdown went viral.

It began when Defence Minister Steven Vandeput tweeted: "Police are asking the public not to report their movements on social media, please support & rt #BrusselsLockdown."

Frustrated and anxious after the city spent a second day on its top state of alert as authorities intensified their hunt for a key Paris attacks suspect, Belgian twitter users responded bizarrely.

Instead of taking pictures of what they could see or describing police operations, they posted pictures of cats.


This, dear outsiders, is how we fight terrorism here. They haven't got a chance! We haz kittens! #BrusselsLockdown pic.twitter.com/sdq1MbrKsz


"I think in one hour I've seen more #lolcats than I've seen in the rest of my life," said social media specialist Mateusz Kukulka, or @Mateusz.

He said he believed the first to have the idea was a cameraman for the Dutch television channel NOS, Hugo Janssen, or @Hoguhugo, who tweeted: "Instead of tweets about police activity in Brussels, here's a picture of our cat Mozart".


As more and more users joined in, there was soon international support too:

"The federal prosecutor and the police services must thank the press and social media users for taking into account the needs of the ongoing operation," prosecutors' office spokesman Eric Van Der Sypt told a press conference as he announced 16 arrests.