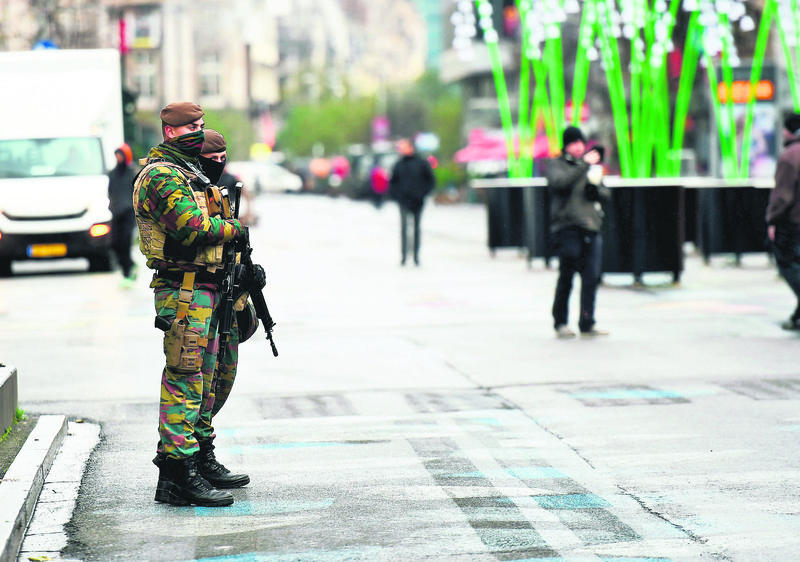 Brussels began a fourth consecutive day in lockdown under the maximum terror alert that will continue for another week with soldiers in camouflage patrolling the entire city from railway stations to EU institutions. Meanwhile, French President Hollande is meeting world leaders to rally for a global fight against DAESH

Brussels will stay at the highest security threat level for another week over fears of an imminent terror attack, the Belgian government said. The United States, meanwhile, issued a worldwide travel alert for its citizens.

Authorities in Belgium and France were hunting for Belgian-born Salah Abdeslam, a key suspect in the Paris attacks on Nov. 13, when gunmen and suicide bombers killed at least 130 people. French police were yesterday analyzing a suspected suicide belt similar to those used in the Paris assault, according to sources close to the investigation. Authorities found the object - which lacked a detonator - in a dustbin in the southern suburb of Montrouge. Telephone data placed Abdeslam in the area on the night of Nov. 13. Another police source said the belt appeared to have "the same configuration" as those used by the extremists.

Fearing a similar attack, Belgium maintained an unprecedented security lockdown in Europe's capital Brussels, with Prime Minister Charles Michel warning Monday that the threat "remains serious and imminent." Belgian authorities have charged a fourth person in connection with the bloodshed in Paris, which was claimed by DAESH. Washington and Paris have stepped up their fight against the extremist group, with France launching its first strikes from a newly deployed aircraft carrier in the Mediterranean and the United States calling for more international cooperation against the group.

The French president is holding talks with Germany's Angela Merkel today, Russia's Vladimir Putin on Thursday and Chinese President Xi Jinping on Sunday, as world leaders rally support for a global fight to crush DAESH. The U.N. Security Council on Friday authorized "all necessary measures" to fight the group.

In Brussels, an eerie atmosphere hung over the city with soldiers in camouflage patrolling everywhere, from railway stations to EU institutions. In the normally bustling historic Grand Place, a few bars and restaurants were open for business but they were struggling to find customers. In downtown Brussels, the only real activity was deliverymen offloading crates for near-empty shops as builders hammered together stalls for a Christmas market meant to open on Friday. "My grandson said we should up sticks and move to the south of the Yser river, just like in World War I [after the Germans invaded]," said Michel, a retired man from a Dutch-speaking suburb. "We have to be careful, but life has to go on - otherwise we're finished," said his wife Patricia.

The army and armed police will remain on the streets in the coming days, the Belgian prime minister said, but schools and the metro system would reopen from Wednesday. The European Union and NATO, which both have their headquarters in Brussels, said they would bolster security and urged non-essential staff to work from home.

Meanwhile the federal prosecutor's office announced that a man who was arrested during a large police operation in Belgium late Sunday has been charged with involvement in the Paris attacks, the fourth so far. Mohammed Amri, 27, and Hamza Attou, 20, were charged on Monday on suspicion of helping Abdeslam escape to Brussels after the attacks, while a third unnamed person faces charges of aiding him when he reached the city. Abdeslam's brother Mohamed on Sunday told Belgian television he thought Salah had decided at the very last moment not to go through with his attack mission. France's Francois Hollande said his country was "at war" with DAESH following the attacks, and on Monday planes based on the flagship Charles de Gaulle aircraft carrier launched their first attacks against the extremist group in Iraq and Syria.

Hollande met British Prime Minister David Cameron in Paris in an effort to widen an international alliance against the extremist group. "We will intensify our strikes, choosing targets that will do the most damage possible to this army of terrorists," Hollande said, adding that NATO allies Britain and France had a "joint obligation" to strike at DAESH. Cameron said he supported France's actions and added that "it's my firm conviction that Britain should do so too." He will make his case to parliament on Thursday for Britain to expand its strikes as part of the U.S.-led coalition into Syria.

The State Department often issues individual country travel alerts, but this notice was a rare "worldwide travel alert" that comes in the wake of a series of attacks. New "attacks may employ a wide variety of tactics, using conventional and non-conventional weapons and targeting both official and private interests," it said.

On Nov. 13, France was hit by its worst terror attack since World War II. At least 130 people died, and more than 350 were wounded, with dozens still in critical condition. Europe got alarmed after the attacks with extra security measures and re-instating of border checks at the internal borders of the EU, which may bring Schengen at risk and make it harder for refugees who seek a safe haven after fleeing violence to get European countries.
RELATED TOPICS