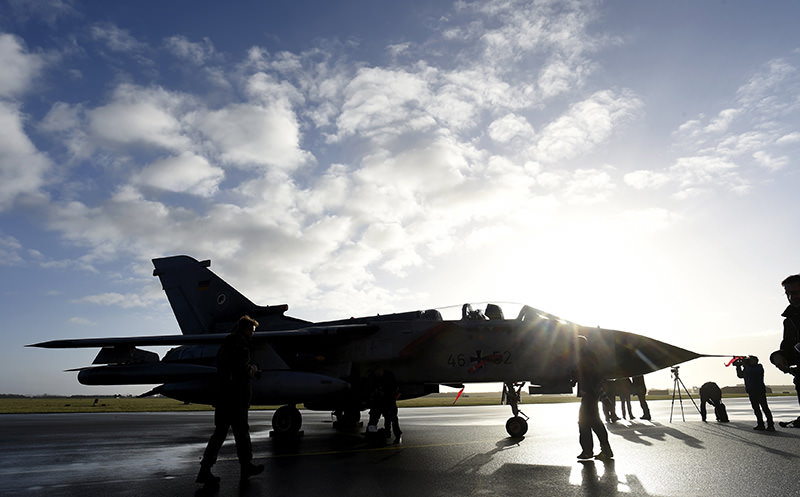 A Tornado aircraft is pictured during a presentation at German army Bundeswehr airbase in Jagel near the German-Danish border, December 4, 2015 (Reuters photo)
by Daily Sabah with Wires Dec 04, 2015 12:00 am

German parliament approved the biggest foreign deployment of its armed forces to Syria and plans to send up to 1,200 troops and relocate six Tornado reconnaissance jets to the İncirlik base in Turkey next week

In a bid to answer France's appeal for help, German parliament approved joining the 60-nation combat mission against DAESH in regions of Syria and Iraq. As part of the approved plan, Germany will deploy six "Tornado" reconnaissance warplanes, a tanker aircraft and a warship, to support the international coalition along with the deployment of up to 1,200 military personnel. The move came a day after Britain started bombing DAESH targets in Syria.

However, German air forces will not conduct bombing missions.

The mandate was endorsed by some 445 German lawmakers, mostly from Chancellor Angela Merkel's Christian Democratic bloc (CDU/CSU), and its coalition partner the Social Democrats (SPD) with 144 German lawmakers from the leftist party voted against the motion and seven lawmakers abstained

The $142 million mandate ends on Dec. 31, 2016, with the possibility of further extensions. The plan also includes the deployment of up to 650 soldiers to the West African nation of Mali to provide assistance to French forces who are fighting militants in the region.

Germany's air force plans to start relocating six Tornado reconnaissance jets to Turkey as soon as next week. Air force officers at the Jagel Air Force Base in northern Germany withheld details until Friday afternoon, after Germany's parliament authorized the military to join in the international mission against DAESH.

The Tactical Air Squadron 51 from Jagel, responsible for sending the planes, has been making preparations all week to send jets to the İncirlik air base in Turkey. The first reconnaissance flights over Syria would not take place until next month.

The squadron at Jagel operates a total of 23 jets that were originally designed for all-weather ground attacks. Officers say the squadron will send at least four of them to Turkey. Pods containing cameras and infra-red sensors are attached to the jets for reconnaissance work.

Besides the deployment of 5,000 German soldiers to Afghanistan for a combat mission, the Syrian mission has become the biggest foreign deployment of German armed forces aiming "to prevent acts of terror."

Meanwhile on Friday, French President Francois Hollande visited military personnel on the Charles de Gaulle aircraft carrier off the Syrian coast where preparations are underway to conduct air strikes on DAESH targets. The carrier, which has 38 warplanes on board, was deployed to the east Mediterranean Sea just days after the Paris attack. Hollande has seen a surge in popularity ratings since he declared "war" on DAESH following the massacre of 130 people by terrorists and suicide bombers in the French capital on Nov. 13.

Britain joined the U.S.-led international coalition in Iraq and Syria on Thursday, bombing a DAESH-held oilfield in Syria. U.S. President Barack Obama agreed to send as many as 100 special operation troops to combat DAESH in Iraq. In response to Obama's decision, on Thursday Iraqi Prime Minister Haider al-Abadi stated that any deployment of foreign ground troops to the country will be considered a "hostile act."
Last Update: Dec 04, 2015 4:59 pm
RELATED TOPICS