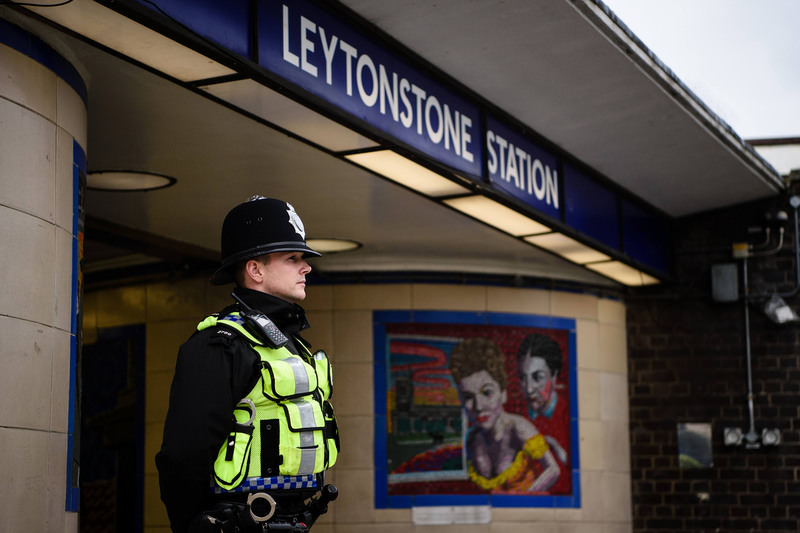 A police officer stands guard outside Leytonstone station Dec 6, 2015, a day after 3 were stabbed in a ,terrorist incident,. (AFP Photo)
by Compiled from Wire Services Dec 07, 2015 12:00 am
The stabbing of a man in the London metro in what police described as a terrorist attack provoked a defiant riposte from a bystander that has struck a chord in Britain: "You ain't no Muslim, bruv".

The 29-year-old assailant named Muhayadin Mire shouted "This is for Syria" as he attacked a 56-year-old man and threatened others before being detained by police who used a stun gun, witnesses said.

Video footage posted on Twitter showed police officers closing in on the knife-wielding man and eventually pinning him down after the attack, in which two people were wounded at the Leytonstone underground station.

An onlooker standing near a pool of blood shouted the colloquial phrase that has swiftly become a popular Twitter hashtag #YouAintNoMuslimBruv and is intended to deny that such an attack could have anything to do with Islam.

The bystander was overheard on mobile phone footage shouting at the assailant: "You're not a Muslim bruv, you're an embarrassment." Bruv is a London term that is a slang shortening of "brother" but is used more widely to mean "friend".

Some Twitter users quoted Islamic scripture to contradict extremists who try to use Islam to justify attacks on unarmed civilians and to recruit followers in the West and Middle East.

"#YouAintNoMuslimBruv, just another psychopath attempting to use religion as an excuse to justify your barbaric actions!!" said one Twitter user, Natasha.

Londoners embraced the phrase. Twitter user Matthew Harper wrote: "#youaintnomuslimbruv is the most #London response to terrorism you could imagine and pretty much sums up how we all feel about these maniacs".

British warplanes joined air strikes against Daesh in Syria for the first time on Thursday, a few hours after parliament gave its approval.

Prime Minister David Cameron has said the air strikes will not increase the likelihood of an attack on Britain, which he says militants already view as a top target, with seven plots foiled over the past year.

On a trip to the English Midlands, Cameron condemned what he said was a "hideous attack" and praised the bystander's comment. "Let me also pay credit to the person - you can't quite see who it is from the film - who made that brilliant statement about 'you ain't no Muslim'," Cameron said.

"Some of us have dedicated speeches and media appearances and soundbites and everything on this subject, but 'You ain't no Muslim bruv' said it all much better than I ever could. Thank you, that will be applauded around the country."

Britain is on its second-highest security alert level of "severe", meaning a militant attack is considered highly likely, though not imminent. This is mainly because of the threat posed by Daesh.
Last Update: Dec 07, 2015 9:50 pm
RELATED TOPICS