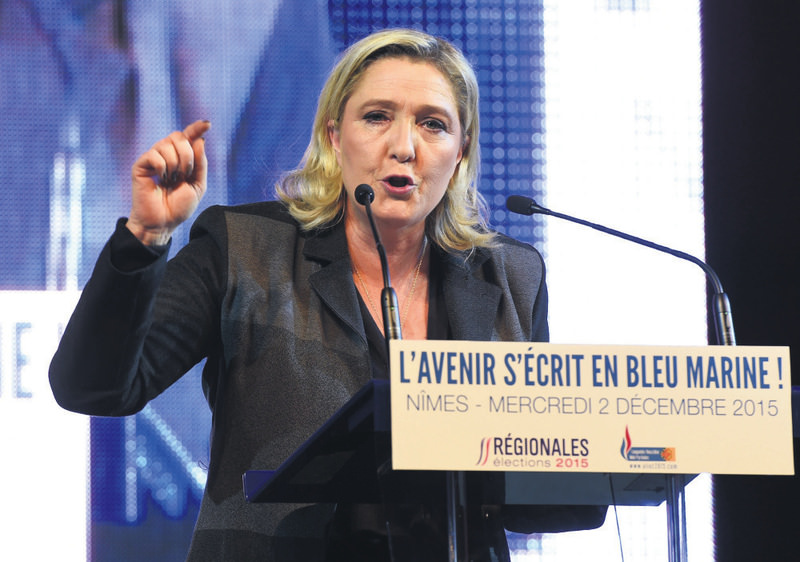 President of the French far-right Front National (FN) party, Marine Le Pen delivers a speech during a campaign meeting in Nimes
by Daily Sabah with Wires Dec 08, 2015 12:00 am

France's far-right National Front performed well in the first-round of the regional election, the first election since the Paris attacks, another example of the increasing support for the far-right in Europe. The FN's anti-migrant and anti-Islamic narrative has long sparked criticism of xenophobia

Despite the strong result, it faces an uphill battle to clinch a run-off vote next week after socialists withdrew candidates in an attempt to block it from power.

The FN came in first with around 28 percent of the vote nationwide and topped the list in at least six of 13 regions, according to final estimates from the interior ministry. FN leader Marine Le Pen and her 25-year-old niece, Marion Marechal-Le Pen, broke the symbolic 40 percent mark in their respective regions, shattering previous records for the party as they tapped into voter anger over a stagnant economy and security fears linked to Europe's refugee crisis. Marion Marechal-Le Pen said last week that Muslims could only be French "if they follow (our) customs and way of life."

Marine Le Pen, a lawyer by training, welcomed the "magnificent result," saying that it proves that the FN is "without contest the first party of France." A group of right-wing parties took 27 percent, official estimates showed, while the ruling Socialist Party and its allies took 23.5 percent.

The polls were held under tight security following the Paris massacre, the worst in France's history, which thrust the FN's anti-immigration and typically Islamophobic message to the fore. Around half of all 45 million registered voters participated at the polls. Any party which secures 10 percent support in the first round has the right to present candidates in the second round, expected next Sunday. Final estimates showed 47-year-old Le Pen taking a whopping 40.5 percent of the vote in the economically depressed northern region of Nord-Pas-de-Calais-Picardie, once a bastion of the left. Marechal-Le Pen did equally well in the vast southeastern Provence-Alpes-Cote d'Azur, known for its glamorous beaches and stunning countryside.

The sucess of the far-right sparked an immediate debate among mainstream parties as to whether or not th ey should, in regions where they trailed in third, urge voters to back the candidate opposing the FN. Socialist leader Jean-Christophe Cambadelis said his party would withdraw from the second round in the regions which Le Pen and her niece were dominating in order "to block" the FN. But, former conservative president Nicolas Sarkozy, head of the republicans and leader of the right-wing group, maintained his refusal to do the same in key polls where the socialists have the strongest opposition. "We must hear and understand the profound exasperation of the French people," he said.

Right-wing daily Le Figaro and communist L'Humanite both expressed "Le Choc" ("Shock") after the result on their front page on Monday, while left-wing newspaper Liberation warned: "It's coming."

Le Parisien conducted a poll predicting that, when faced with a straight choice in the second round between an FN and a right-wing candidate, 59 percent of citizens would vote for the conservative party and 41 percent for the far-right. President Francois Hollande has seen his personal ratings surge as a result of his hardline approach since the Nov. 13 attacks in Paris. However, his Socialist Party has languished behind the FN and the center-right Republicans.

The FN's anti-EU and anti-immigrant narrative has been a propelling force for the majority of French voters, who have lost faith in mainstream parties after years of dipping unemployment rates. A potential victory next week would not only hand control of a regional government to the FN for the first time, but would also give Le Pen a springboard for her presidential bid in 2017.

As the party hailed its victory on Sunday, Jean-Marie Le Pen tweeted a video of Christian Estrosi, the conservative rival to Marechal-Le Pen in the southeast, wearing a kippa, a skullcap, and dancing with Jewish men -- a scene apparently recorded at a bar mitzvah or other celebration. "Take heart at a time of ill fortune," he said in a tweet accompanying the footage, which has since been removed.

Europe has been witnessing a shift towards right-wing parties, which have been gaining popularity amid rising public fears regarding the refugee influx. Recently, the polls showed a rise in support for right-wing parties in Austria, Poland and Switzerland.

After the deadly Paris attacks on Nov. 13 that killed 130 people, a spike in Islamophobia and anti-migrant sentiment has been observed. The Front National's repeated linking of immigration with terrorism has also helped it climb in the polls since the assaults in Paris. Even though many community leaders in France and across Europe immediately denounced the massacre and emphasized that DAESH represents neither them nor their religion, there is still widespread concern that they could be targeted in retaliatory and discriminatory practices by xenophobic elements within the country or in the rest of Europe. Around 160 mosques may be closed in the coming months "as part of a nationwide police operation." Also, according to Al Jazeera, the French National Observatory Against Islamophobia said "there have been 116 anti-Muslim attacks in the country since the Nov. 13 attacks." Meanwhile, Syrian refugees, who have been seeking a safe shelter mostly in Europe, but also in North America, face a backlash over the attacks because of their religion, as well.

Europe's populist right rushed to demand an end to the influx of refugees from the Middle East in the wake of the attacks. France is home to the largest Muslim population in Europe, estimated at between 4.5 million. The French Muslim community represents approximately 6 percent of the total population of the 58.5 million that live in France.
RELATED TOPICS