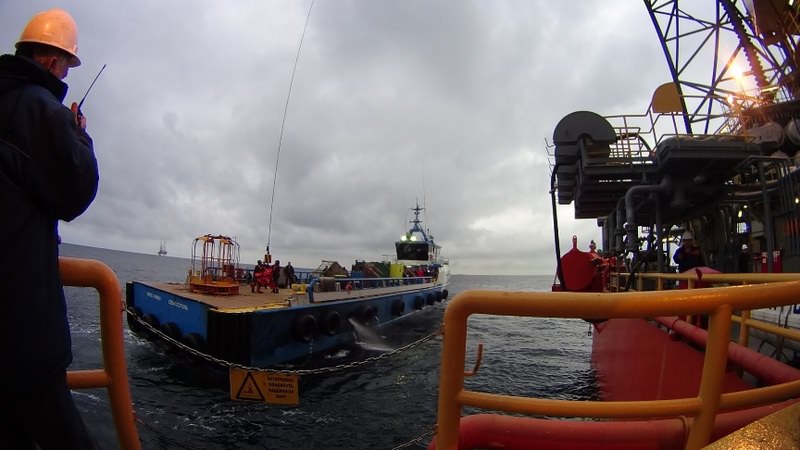 by Daily Sabah Dec 15, 2015 12:00 am
As reports on Russian navy forcing a Turkish merchant ship to change its course in the Black Sea emerged on Monday, the reason behind the move of Russian navy became clearer.

According to an article published in Russian Kommersant news website, the Russian navy was accompanying to the towing of two oil drilling platforms worth $353.7 million, which were being disputed between Russia-annexed Crimea and Ukraine.

Following the illegal annexation of Crimea by Russia in 2014, the Chernomorneftegaz oil and gas drilling company was seized by the Crimean regional parliament. The company was an affiliate of Naftogaz, Ukraine's national oil and gas company.

Ukraine declared that it will apply to international arbitration for Chernomorneftegaz's assets to be confiscated. As drilling platforms were operating in international waters off Ukrainian city of Odessa, they could have been easily seized.

Therefore Russia towed the platforms to its territorial waters to avoid such a seizure by Ukraine, and the Turkish merchant ship was passing by this dubious operation.

The reports over the changing course of the Turkish ship emerged through a statement by Chernomorneftegaz on Monday. The statement said that a Russian corvette and a coast guard boat have forced a commercial vessel under with a Turkish flag to change course after it got in the way of a Crimean energy firm's boats towing oil rigs, the company said, adding that the rigs were delivered to safety.

Earlier on Sunday, Russia's Defense Ministry announced its navy destroyer Smetlivy "fired warning shots for a Turkish vessel in the Aegean Sea to avoid a collision," and Turkey's military attaché in Moscow was summoned to the ministry over the incident. The Turkish fishermen, speaking to Turkish press, said that they did not know the ship was Russian and they did not realize they were fired at.

Since Turkish F-16 fighter jets downed as Russian Su-24 bomber for breaching Turkey's airspace near Syrian border on November 24, the relations among two countries have remained tense with Russia applying economic and diplomatic sanctions against Turkey.

Turkish officials repeatedly asked for calm and relations not to be further strained since the incident.
Last Update: Dec 15, 2015 4:20 pm
RELATED TOPICS