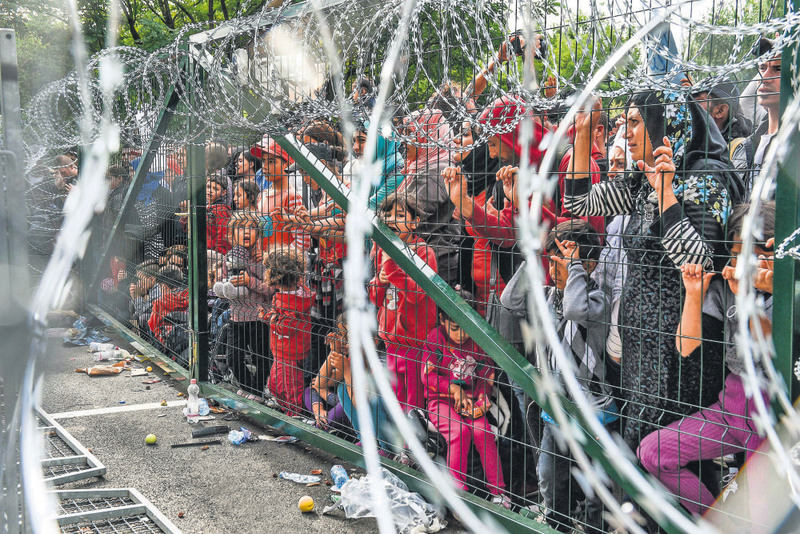 Refugees stand behind a fence at the Hungarian border with Serbia near the town of Horgos on Sept. 16.
by Daily Sabah with Wires Dec 17, 2015 12:00 am

Amid refugee pressure and fears that the Schengen zone may collapse, the EU has unveiled plans for a new, controversial European border agency that would have more resources and greater powers than Frontex, the current EU border force

The EU unveiled plans Tuesday for a new border and coast guard force that can intervene even without the host country's consent, saying it had to restore security threatened by the migration crisis.

The new agency will have a quick reaction force of 1,500 guards and a "right to intervene" in European Union nations that are either overwhelmed or are deemed to be failing to secure their frontiers. With 1 million mainly Syrian refugees and migrants set to arrive in Europe this year, the record flow has raised fears for the future of the Schengen passport-free zone, while the Paris attacks have increased pressure for tighter checks on the frontiers. But some member states in the 28-nation EU are hostile to the idea of a plan that could see them cede sovereignty over their own land and sea borders to bureaucrats in Brussels. "We don't replace member states' responsibilities and definitely not their sovereignty," Migration Commissioner Dimitris Avramopoulos told the European Parliament.

European Commission Vice President Frans Timmermans said the new force could take over management of national borders in "exceptional situations" where a member state was unable to cope. "This is a safety net which, like all safety nets, we hope will never need to be used. But it is essential to restore the credibility of our border management system," Timmermans said as he presented the plan to the European Parliament.

Brussels also set out plans to resettle some refugees directly from Turkey, the main launching point for most of the refugees coming to Europe.

Germany and other EU countries have in the last few weeks reintroduced temporary border controls to cope with the crisis, the biggest of its kind since World War II. The fear is that if those controls become permanent, the 26-country Schengen zone that ensures the EU's core principle of freedom of movement would collapse, taking the idea of a single, united Europe with it.

The proposal is just the start of a potentially long and divisive legislative process. If approved by governments, the new body will replace the EU's Frontex agency and have expanded powers, including keeping a 1,500-strong rapid reaction force on standby. It will have funding worth 322 million euros by 2020, up from the 114 million euros originally budgeted for this year. EU leaders will discuss the new plan - which has been drawn up by the Commission, the EU's powerful executive arm - at a summit on Thursday and Friday, European Council President Donald Tusk said. "We must regain control over our external borders to stem migratory flows and to preserve Schengen," Tusk said in his invitation letter to leaders.

The border guard plan won the approval of European Parliament President Martin Schulz, who said the EU had to be able to act when member states could not meet their responsibilities. But the plan faces being severely watered down by EU member states before the as yet unnamed agency comes into effect.

Polish Foreign Minister Witold Waszczykowski said Monday that the replacement of Warsaw-based Frontex "by a structure that is independent of member states is shocking." Rights group Amnesty International said the EU border guard plan "must not be at the expense of migrant and refugee rights."

The new border guard system is just one part of the EU's multi-pronged strategy aimed at stemming the unprecedented flow of refugees and migrants seeking a new life in Europe. Many of the other measures are struggling to have an effect. A controversial plan to relocate refugees around the EU to relieve the pressure on frontline states like Greece and Italy has so far shared out only a few hundred out of a planned total of 160,000.

According to the International Organization for Migration, more than 920,000 people have entered the EU so far this year. The influx has overwhelmed national border guards and reception capacities, notably in Greece, where some 770,000 migrants have arrived, most of them from Turkey. The majority of migrants come from the Middle East and Africa. The turmoil in the Middle East and the five-year war in Syria have led many people to flee the conflict in an attempt to seek security and shelter in a more prosperous and peaceful country, such as one in Europe. However, Europe has been slammed for lacking a collaborative response to the crisis.
Last Update: Dec 17, 2015 1:32 am
RELATED TOPICS