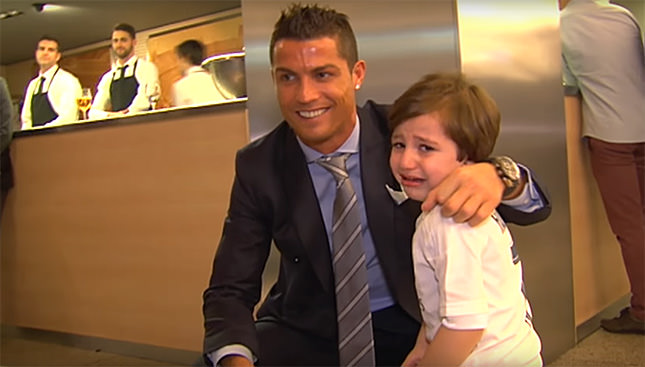 |Real Madrid Photo
by Dec 19, 2015 12:00 am
Real Madrid star Cristiano Ronaldo gave a warm welcome Friday at the club's stadium to a little Lebanese boy who last month lost both parents in a Beirut attack that was claimed by Daesh, the club said.

"Haidar, a three-year-old child who in November lost both of his parents in bombings in Beirut, saw his dream come true on Friday when he was given the opportunity to meet his idol, Cristiano Ronaldo," Real Madrid said in a statement posted on its website.

Ronaldo, wearing a suit and tie, could be seen in a picture posted on the club website giving the boy a hug.

Haidar wore a Real Madrid jersey with his name on it and the Portuguese player's number 7 on the back.

He had received the jersey earlier as a gift from club president Florentino Perez, who also give him a brief tour of the club's trophy room.

"Following the brutal attack in the Lebanese capital last month, the story of Haidar, photographed in a Real Madrid shirt after surviving the massacre, came to global attention," the statement said.

"And since then, the club had been ceaseless in its efforts to get in contact with him and arrange for his dream of meeting Cristiano," it added.

The Nov 12 attack hit a busy shopping street in Burj al-Barajneh, a Beirut suburb where the Hezbollah is popular.

A total of 44 people were killed.

It was the largest Daesh attack to have hit Lebanon, and among the deadliest bombings in the country in decades.