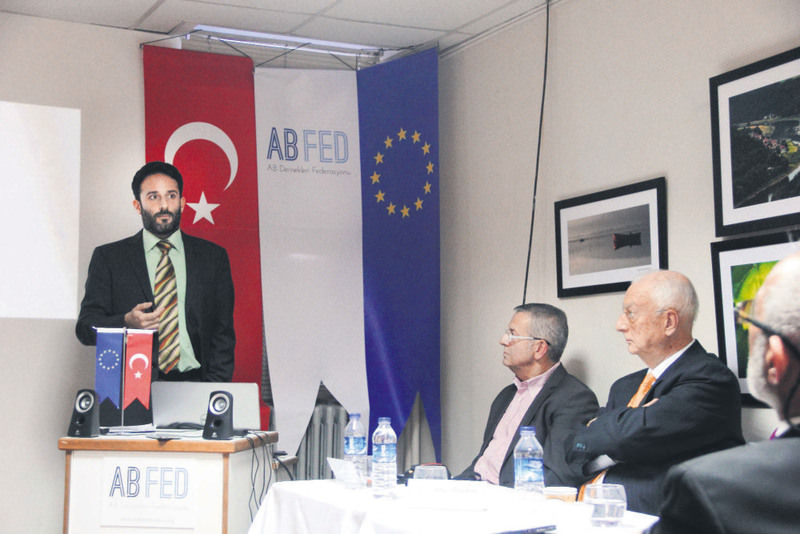 In a forum in Istanbul held by the Federation of Associations of the EU academics discussed the current refugee influx, saying migration is not a problem and that societies can be enriched by managing the process properly, adding that the rise of anti-immigrant parties may be a problem for EU-bound migrants

Experts got together to discuss the current refugee influx, especially in Europe, and its effects on politics, in a forum held by the Federation of Associations of the European Union in Istanbul yesterday. A senior expert at the European Stability Initiative (ESI), Fikret Emcioğlu, mentioned the rising trend of European right-wing sentiments against the massive refugee influx to the continent.

Emcioğlu showed examples of how right-wing populist parties – such as Le Pen's National Front in France, Poland's conservative Law and Justice and Austria's Freedom Party – have increased their votes. Several leaders, such as Hungarian Prime Minister Viktor Orban, have drawn criticism for their remarks on refugees. Orban said the Muslim influx is threatening Europe's "Christian roots" and Slovakian Prime Minister Robert Fico said his country is "monitoring every Muslim" after the deadly Paris attack that killed 130 and was claimed by DAESH. Emcioğlu pointed out that Europe is known for its liberal values and freedom but right-wing leaders in Europe are in alliance and that their stance is clear: anti-Islam and anti-migrant.

Experts said the number of displaced people and refugees are at a record high amid expanding global conflicts. Even though there are people traveling from Afghanistan, Iran, Pakistan and African countries, Emcioğlu said Syrians should be evaluated separately as they are both internally and externally displaced in huge numbers. Around 60 million people around the world are thought to be displaced, according to U.N. figures. According to U.N. estimates, the ongoing conflict in Syria has displaced 7.6 million people internally and 3.9 million people externally. Syrians constitute a quarter of the 14.4 million around the world who are officially recognized as "refugees" by UNHCR. Emcioğlu stressed that only 10 percent of them are looking for asylum in Europe while most of them are hosted by Syria's neighboring countries such as Lebanon, Jordan and Turkey.

Turkey is the country with the most refugees in the world, hosting more than 2.3 million, according to the recent figures released by Turkish officials. Emcioğlu also said many refugees in Jordan and Lebanon do not have any future plans such as going to Europe while the ones in Turkey prefer to go to Germany, mostly because of Turkey's location, from where it is easier to cross to Europe. Emcioğlu said the most popular destination among refugees is Germany, which also received the most asylum applications – some 20 percent of the total applications.

After the image of drowned Syrian toddler Aylan Kurdi became the tragic symbol of the refugee crisis, perilous journeys by refugees trying to cross the Mediterranean or Aegean Sea drew attention worldwide. Despite fluctuations in the number of refugees, mostly due to the Turkish crackdown on people smugglers and bad weather conditions, many refugees continue to risk their lives in an attempt to get to Greek islands on small rafts. According to the International Organization for Migration, 3,563 people have died in the Mediterranean so far this year as they attempted to reach European shores, a figure that includes 589 around Turkey.

Assistant Professor and Head of International Relations Department in Özyeğin University Deniz Sert stressed that evaluating migrants or migration as a "problem" will hinder efforts to integrate migrants into society. "Migration should not be considered a problem. If we can manage the process properly, migration can even enrichen our societies," she said. Sert also said that Turkey is now a migrant-receiving country rather than just a transit country. Sert criticized opposition to refugees in Turkey, saying some of them think simply that when the war is over, all the Syrian refugees will go back to their countries. "No, this is a long and multidimensional process. If we think of it in such a simplistic way, we will not be able to produce long-term solutions for refugees," Sert said.

Sert also emphasized that the recent refugee influx has revived civil society movements in Turkey, helping Turkish nongovernmental organizations that work to provide aid for Syrian refugees. Sert said a General Directorate of Migration Administration, which was established under the Ministry of Interior in 2013, has made good progress in managing the process of migrants. Sert also said the system, not only in Turkey, but in the whole world still has some vagueness over its treatment of refugees. As Emcioğlu emphasized that only a small number of the 160,000 refugees have been relocated across Europe, while the exact number varies with different sources.

A series of pictures showing the refugees' perilous and challenging journey was also presented in the forum. The majority of migrants come from the Middle East and Africa. The turmoil in the Middle East and the five-year war in Syria have led many people to flee the conflict in an attempt to seek security and shelter in a more prosperous and peaceful country, such as ones in Europe. The civil war in Syria has claimed more than 250,000 lives and made the country the world's single-largest source of refugees and displaced people.
RELATED TOPICS