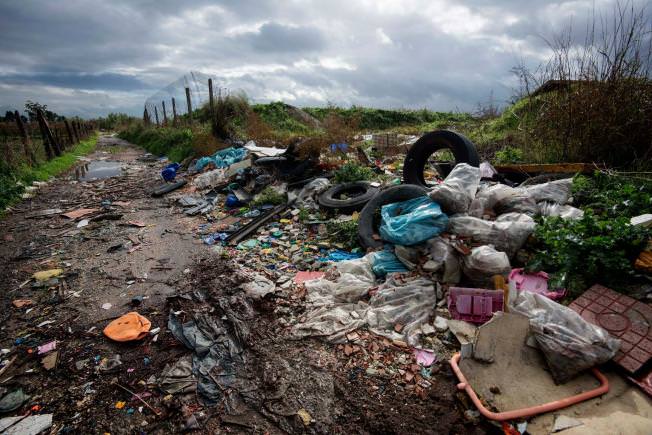 In this Nov. 18, 2013 photo, rubbish is piled up on the edge of cultivated land near Caivano, in the surroundings of Naples, southern Italy. (AP Photo)
by Associated Press Jan 02, 2016 12:00 am
An Italian parliament-mandated health survey has confirmed higher-than-normal incidents of death and cancer among residents in and around Naples, thanks to decades of toxic waste dumping by the local Camorra mob.

The report by the National Institute of Health said it was "critical" to address the rates of babies in the provinces of Naples and Caserta who are being hospitalized in the first year of life for "excessive" instances of tumors, especially brain tumors.

The report, which updated an initial one in 2014, blamed the higher-than-expected rates on "ascertained or suspected exposure to a combination of environmental contaminants that can be emitted or released from illegal dump hazardous waste sites or the uncontrolled burning of both urban and hazardous waste."

Residents have long complained about adverse health effects from the dumping, which has poisoned the underground wells that irrigate the farmland which provides vegetables for much of Italy's center and south. Over the years, police have sequestered dozens of fields because their irrigation wells contained high levels of lead, arsenic and the industrial solvent tetrachloride.

Authorities say the contamination is due to the Camorra's multibillion-dollar racket in disposing of toxic waste, mainly from industries in Italy's wealthy north that ask no questions about where the garbage goes as long as it's taken off their hands for a fraction of the cost of legal disposal. In recent years, Camorra turncoats have revealed how the racket works, directing police to specific sites where toxic garbage was dumped.

In 2014, parliament passed a law mandating the National Institute of Health, a public institution under the Health Ministry, to report on the rates of death, hospitalization and cancer in the 55 municipalities in the so-called "Land of Fires."

The new report, released Dec. 30 report with little fanfare, confirmed what residents have long known, the Rev. Maurizio Patriciello, a priest in the area, wrote Saturday in Avvenire, the newspaper of the Italian bishops' conference which has long advocated on behalf of the area's residents.

"Can we claim victory? Absolutely not," he wrote. "In this shameful, sad and painful story, we have lost everything. The government above all."