UK soldiers who fought in Iraq may face prosecution for abuse, murder 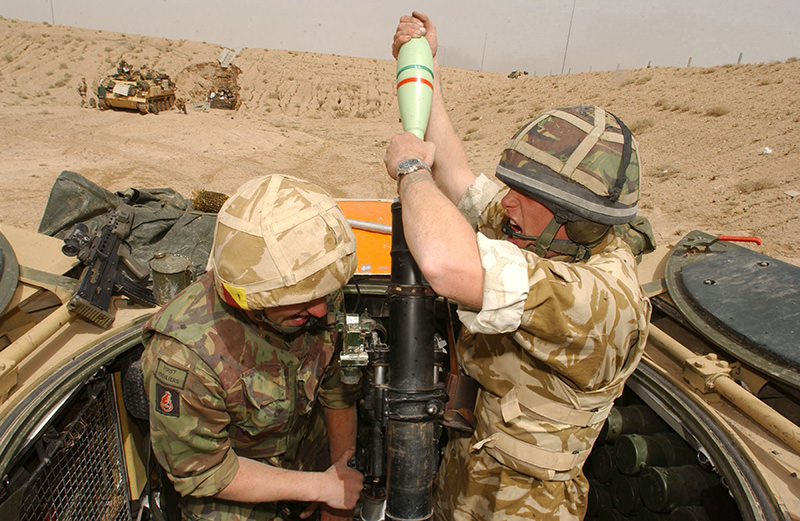 British soldiers engage Iraqi Army positions with their 81mm mortars south of Basra, 26 March 2003 (WikiMedia Photo)
by Daily Sabah with AP Jan 02, 2016 12:00 am
The head of an official British investigation into alleged abuses during the Iraq War says that U.K. soldiers may face prosecution for crimes including murder.

Mark Warwick said the inquiry is probing "lots of significant cases" and officials will discuss whether they meet the war crimes threshold.

British forces withdrew from Iraq in 2009. Lawyers are still referring cases to the British government-established criminal probe into murder, abuse and torture claims linked to the six-year military mission.

The inquiry has considered at least 1,515 possible victims, including 280 who were allegedly unlawfully killed.

The probe is not due to finish its work until the end of 2019.

Recently, the former British Prime Minister Tony Blair has said that "there are elements of truth" in the assertion that the Iraq war caused the rise of ISIS.

"Of course you can't say those of us who removed Saddam in 2003 bear no responsibility for the situation in 2015," he said in an interview for CNN.

Blair's decision to take Britain into the Iraq war based on what turned out to be false claims about Saddam's weapons of mass destruction remains hugely divisive, and contributed to his Labour Party's loss of power in 2010. Blair apologized again during the interview, as he has before, for failures in post-war planning.

"I apologize for the fact that the intelligence we received was wrong," he said in clips released by CNN before the broadcast.

"I also apologize for some of the mistakes in planning and, certainly, our mistake in our understanding of what would happen once you removed the regime."

Some 179 British personnel died in Iraq between 2003 and 2009. A public inquiry into decisions and mistakes in Britain's planning and execution of the war began in 2009 but has yet to issue its findings.

The process has been held up while people criticized in the report are given a chance to respond.

Critics of the war hope the inquiry will conclude that Blair was determined to back President George W. Bush in his invasion plans, whether or not it was supported by the public, Parliament or legal opinion.
Last Update: Jan 02, 2016 3:25 pm
RELATED TOPICS