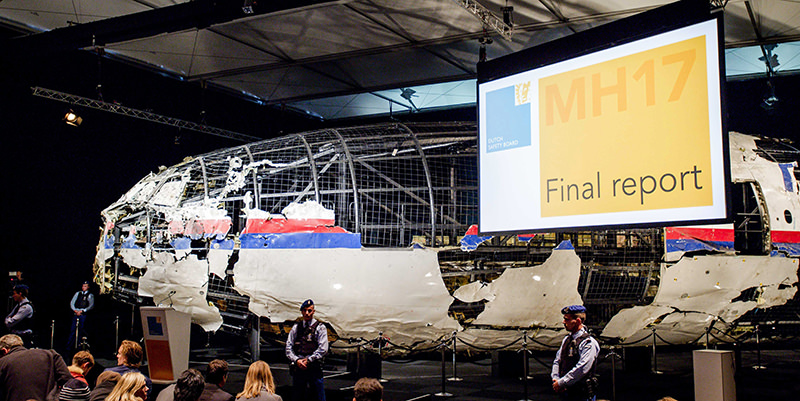 The rebuilt fuselage of Malaysia Airlines flight MH17 during a press conference to present the report findings of the Dutch Safety Board in Gilze Rijen, The Netherlands, 13 October 2015 (EPA Photo)
by Daily Sabah with Agencies Jan 04, 2016 12:00 am
Prosecutors in the Netherlands are planning to review claims by a group of 'investigative journalists,' who identified 20 Russian soldiers implicated in the MH17 flight, which was downed over eastern Ukraine on July 17, 2014.

According to reports, the Britain-based international research group called Bellingcat said in 2014 that a BUK mobile launcher, spotted on July 17 in an area controlled by pro-Russian rebels, came from a military convoy from Russia's 53rd anti-aircraft brigade -- a unit based in Kursk but sent on maneuvers near the Ukrainian border.

The launcher was later filmed again, but at least one of its missiles was missing.

"We received the report just after Christmas," Wim de Bruin, a spokesman for the Dutch prosecutor's office said.

"We will seriously study it and determine whether it can be used for the criminal inquiry," de Bruin said.

Western nations and Ukraine say the missile was fired from pro-Russian separatist-held territory, but Moscow denies the claim, pointing the finger instead at the Ukrainian military.

The Netherlands have launched a criminal probe into those responsible for the shooting, but many experts doubt whether it will succeed.

In an interview with the Dutch TV channel NOS on Sunday, Bellingcat founder Eliot Higgins said his organization had now identified 20 soldiers in this brigade.

This is "probably" the group that either knows who fired or has that individual among its number, Higgins said.

The sources for this include photos posted on the Internet and army data about personnel deployment that was available online, NOS said.

It added that a redacted version of the report should be published "shortly."

De Bruin said Dutch prosecutors had "already been in contact" with Bellingcat in the past.