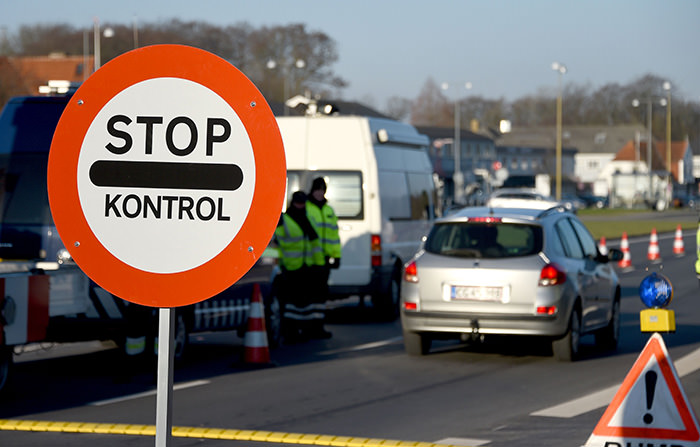 Danish police have set up a border control point on January 5, 2016 at the border town of Krusa bei Flensburg (AFP Photo)
by Anadolu Agency Jan 05, 2016 12:00 am
The European Commissioner for Migration has summoned Swedish, Danish and German officials to Brussels following an increase of border controls to stop refugees from coming to the region.

The move comes one day after Sweden reinforced identity checks for the first time on its borders since the 1950s and Denmark announced it would strengthen security on its frontier with southern Germany to stem the flow of refugees.

"The purpose of tomorrow's meeting is to bring together [the] main actors involved in the situation," spokesman for the European Commission, Margaritis Schinas, told a news conference in Brussels on Tuesday.

Sweden, known for its generous welfare policies and for welcoming refugees, has begun to scale back on its asylum measures after receiving the highest number of refugees per capita of its population in Europe.

"But member states must respect EU law when they perform such controls. We are currently examining legal provisions of Swedish law," Ernst added.

More than 150,000 people have sought asylum in Sweden. Denmark is expecting up to 20,000 asylum seekers this year, according to its immigration ministry.
Last Update: Jan 05, 2016 5:00 pm
RELATED TOPICS