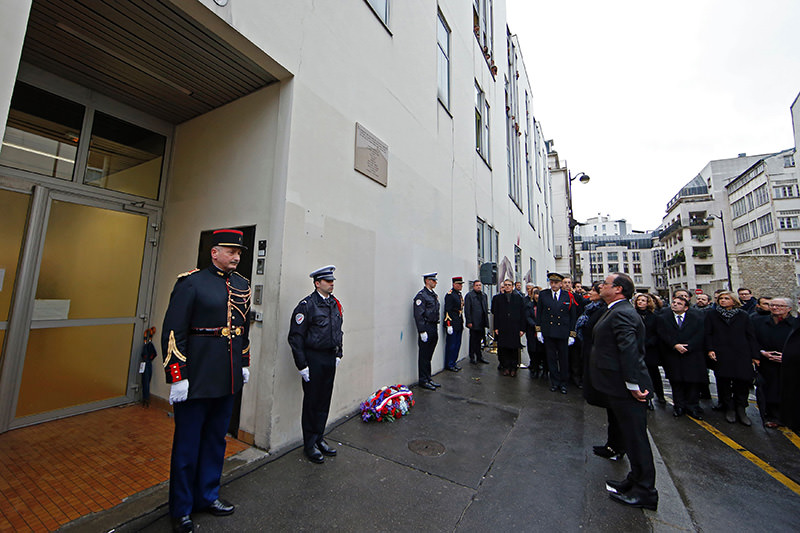 Hollande looks at commemorative plaque after its unveiling outside former offices of French weekly satirical newspaper Charlie Hebdo on Jan 5, 2016 (AFP)
by Daily Sabah with Agencies Jan 05, 2016 12:00 am
French President François Hollande honored the 17 victims killed in extremist attacks on the satirical magazine Charlie Hebdo, a kosher market and police a year ago this week, unveiling plaques around Paris marking the places were the violence that ushered in a tumultuous year occurred.

Families of the victims joined Hollande and other dignitaries near the building where Charlie Hebdo staff were holding an editorial meeting when two heavily armed brothers stormed in Jan. 7, 2015, killing 11 people. In a somber, wordless observance under a light drizzle, Hollande, flanked by Paris Mayor Anne Hidalgo, also laid a wreath under the plaque bearing the names of the 11 victims shot dead at the magazine's offices in eastern Paris. The plaque begins: "To the memory of victims of the terrorist attack against freedom of expression."

They then paid homage to a police officer killed as he tried to chase down the fleeing gunmen. Spray-painted on the sidewalk was a message of support for the Muslim officer, reading: "Je suis Ahmed" (I am Ahmed) in the red, white and blue of the French flag.

A total of 17 people were killed in the three days of attacks dubbed "France's 9/11," marking the start of a string of extremist strikes in the country that culminated in November's massacre in Paris. The country remains under a state of emergency after the Nov. 13 attacks, and extra security was on hand for Tuesday's commemorations.

Charlie Hebdo had published satirical caricatures of a wide-range of religious figures, including the Prophet Muhammad and Muslim leaders, in 2006 and 2012, which the magazine presented as "freedom of expression," sparking anger in the Islamic world.

Meanwhile, the magazine has provoked fresh controversy with a new front-page cartoon that marks one year since gunmen murdered 12 people in an attack on its Paris office.

More than 1 million copies of a 32-page special edition have been prepared for Wednesday, with a front-cover cartoon depicting a bloodstained, bearded man-representing God with a gun across his shoulder. A caption reads: "One year on, the murderer is still on the loose." The cartoon was drawn by the magazine's current editor, Laurent Sourisseau – known by the alias "Riss" – who also wrote an accompanying editorial reportedly defending secularism and the right "to laugh at the religious."

However, some figures criticized the choice of image. Abdallah Zekri, president of the Observatory Against Islamophobia, told BFMTV on Monday that the cartoon "is violent and very insulting toward religion." Nicolas Henin, a French journalist who was held captive for 10 months by DAESH in Syria, described the cover as "disastrous." "Catastrophic cover #Charlie anniversary: bringing terrorism to its religious dimension is a disaster," Henin tweeted. "This is exactly what the terrorists want: to be given religious legitimacy. It's not gods who are the killers but those who claim to be acting for him," he added.

Christine Boutin, head of France's small Christian Democrat Party, tweeted: "The front page of the Charlie Hebdo anniversary and what is it referring to 'Religions.' It's becoming an obsession. This tragedy deserved better."
Last Update: Jan 05, 2016 4:06 pm
RELATED TOPICS