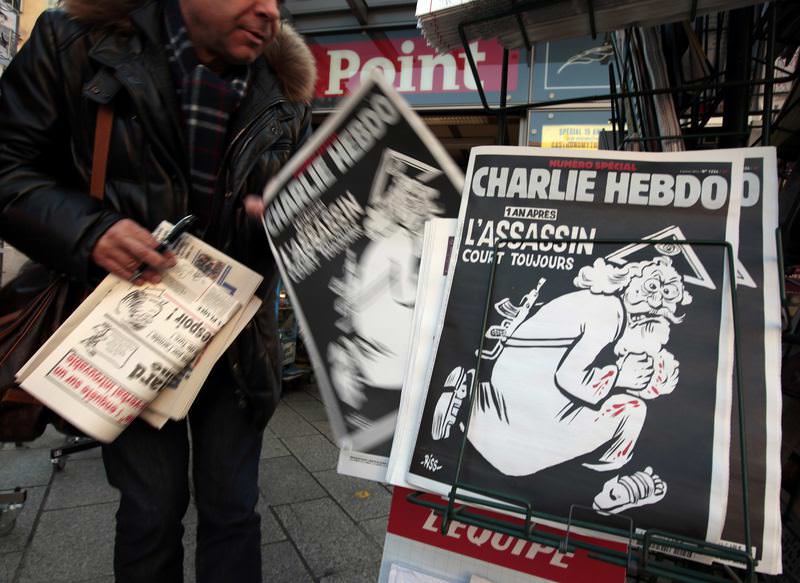 by Daily Sabah with AFP Jan 06, 2016 12:00 am
One year after a terror attack wiped out most of its staff, French satirical magazine Charlie Hebdo on Wednesday published a "provocative" special edition featuring a gun-toting God, sparking protests from the Vatican.

The cover of the anniversary edition features a bloodstained, bearded God-figure in sandals with a Kalashnikov AK-47 rifle slung over his shoulder, and a triangle hat with the eye of providence under the headline: "One year on: the killer is still at large."

The controversial cover is typical of the fiercely secular publication whose drawings of the Prophet Mohammed drew the fury of Muslims around the world and caused the bloody terror attack on its offices on January 7 last year.

Said and Cherif Kouachi brothers gunned down eight Charlie staff as well as several others in and around the building in the assault, which began three days of terror in the French capital that would eventually leave 17 dead.

"It is the idea of God itself that we, at Charlie, contest. You need to shake up people's ideas or they stay stuck in their positions," said cartoonist Riss, who lost the use of his right arm in the attack, in an interview with AFP.

Charlie Hebdo, a struggling publication that gained bittersweet fame after the attacks and became a symbol for the freedom of speech, has printed one million copies of the anniversary edition.

"I love the cover. I never bought it before (the attack) but have taken it several times this year," said Francis, 53, outside a newspaper kiosk in Paris.

"It's good to be uncomfortable while reading it."

While millions rushed to buy the first edition after the attack, circulation of the controversial publication has slowed down to about 100,000 copies a week and there were no crowds trying to buy the anniversary edition.

Before the attack, Charlie Hebdo was facing financial ruin and barely managed to sell 30,000 issues a week.

The Vatican criticized the cover for failing to "acknowledge or to respect believers' faith in God, regardless of the religion."

"Behind the deceptive flag of uncompromising secularism, the weekly is forgetting once more what religious leaders of every faith unceasingly repeat... using God to justify hatred -- is a genuine blasphemy, as Pope Francis has said several times."

The attack on Charlie, as well as a Jewish supermarket and police, brought millions onto the streets in protest and led to soul-searching over the country's cherished secularism as well as issues such as integration.

"It was unthinkable that in France in the 21st century, journalists would be killed by religion," cartoonist Riss wrote in the editorial of the special edition.

"We saw France as an island of secularism, where it was possible to tell jokes, draw, laugh, without worrying about dogma, fanatics."

The special edition devotes several pages to the topic of secularism, as well as reflections on the terrifying minutes when the Kouachi brothers burst into an editorial meeting spraying gunfire.

In his editorial, Riss wrote that the team was keenly aware of the fact that since publishing images of the Prophet Mohammed, considered forbidden in Islamic faith, "many hoped someone would one day put us in our places."

The attack, claimed by Al-Qaeda's branch in the Arabian Peninsula, was not the first on the publication, which was firebombed in 2011.

The bloodshed stunned a nation that has become a target for extremists and was again plunged into shock in November when 130 people were killed in coordinated attacks around Paris.

Charlie has continued to raise ire, refusing self-censorship in the wake of the attacks, working from ultra-secure offices in a top-secret location.

When Riss pictured Aylan Kurdi, the Syrian toddler found dead on a Turkish beach this year, under a McDonald's sign in what was intended to be criticism of the consumer society, he was accused of racism.

And he said a priest who attended the massive January 11 march after the attack had written to him to say he found the latest cover "scandalous."

The cartoonist said in his editorial he was often asked how he managed to continue after what had happened.

"We want to beat the crap out of those who wanted us to die more than ever."

"It is not two little idiots in balaclavas who are going to screw up our life's work."

However those killed are never far from the minds of the cartoonists.

"I ask myself sometimes if I am making the newspaper they would have made. To me, they are no longer there but they are not gone," said Riss.
Last Update: Jan 06, 2016 8:21 pm
RELATED TOPICS