Fears over refugee scapegoating after mass sexual assault in Germany 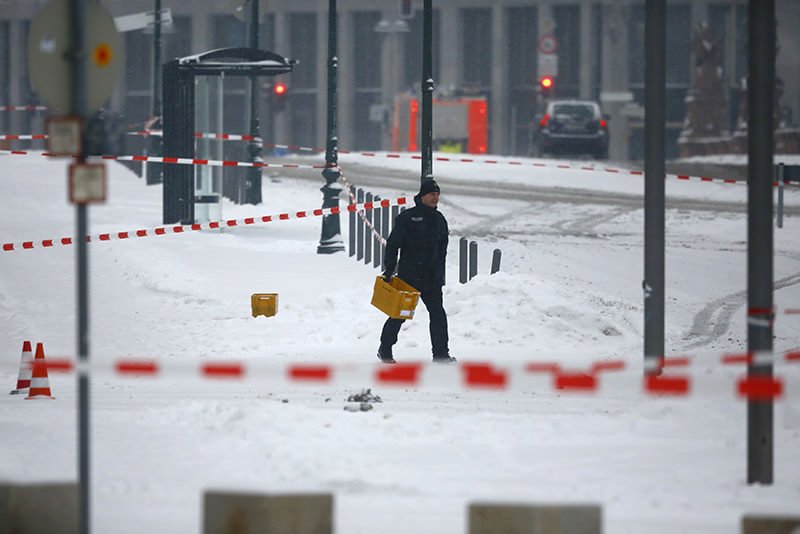 Police removes suspicious yellow postal crates near the chancellory in Berlin, Germany on January 6, 2016. (Reuters)
by Daily Sabah with Wires Jan 06, 2016 12:00 am

Following the announcement of the reported origins of the suspects who attacked women during New Year’s celebrations in Cologne, refugees are again under the spotlight. Despite warnings from German authorities, refugees fear scapegoating

German police have identified three suspects in connection with attacks on women at New Year's celebrations in the city of Cologne, the interior minister of the state of North Rhine-Westphalia (NRW) said on Wednesday.

About 90 women reported being robbed, threatened or sexually molested at New Year's celebrations outside the city's cathedral by young, mostly drunk, men, police said on Tuesday, in events they described as "a new dimension in crime." The police chief in Cologne has said the perpetrators appeared to be of "Arab or North African" origin, prompting right-wing groups to condemn the government for its welcoming stance towards refugees.

NRW Interior Minister Ralf Jaeger told a news conference no arrests had yet been made. He declined to give further details of the investigation but said he expected "a very detailed report" this week from the police.

Police said about 1,000 men gathered there and that smaller groups surrounded individual women, harassed them and stole their belongings. Police do not believe all 1,000 men were involved in the attacks. Police said some of the assaults in Cologne appeared similar to incidents that have been reported over the past two years in Dusseldorf, where men have groped women to distract them before stealing their belongings. The two cities are 40 kilometers apart. Markus Niesczeri, a spokesman for Dusseldorf police, said that since the start of 2014, officers there have identified more than 2,000 suspects of North African origin in connection with organized thefts, though he did not say how many. He declined to say whether there have been any arrests in those cases.

Dusseldorf police were working closely with their counterparts in Cologne to determine whether crimes in the two cities might be connected, Niesczeri said. Authorities have cautioned that the nationality and residency status of the Cologne suspects is still unknown, since no one has been arrested.

The crimes have stunned Germany, where a massive influx of refugees from the Middle East and other regions has also triggered widespread xenophobia and anti-immigrant sentiment and refugees fear to be targeted because of the incident. Government officials have cautioned against putting foreigners and refugees under "blanket suspicion" because of the assaults. Germany registered nearly 1.1 million people as asylum seekers last year, according to Interior Ministry figures released on Wednesday, and politicians who have called for limits on migration have seized on the incident in Cologne to bolster their position.

"All of the perpetrators, of whatever origin, must be punished," Interior Minister Thomas de Maiziere told Wednesday's edition of the Bild daily. "If refugees were among them, we must address that openly."

Chancellor Angela Merkel and Reker expressed "their outrage at these disgusting assaults and sexual attacks" during a telephone call Tuesday, Merkel's spokesman Steffen Seibert said. Around 150 people gathered in front of Cologne's cathedral on Tuesday evening to protest against violence against women. One of them held a sign saying: "Ms. Merkel where are you? What do you say? This scares us!" Chancellor Angela Merkel has expressed shock at the attacks.

Recently, Europe has witnessed a shift towards the right-wing, anti-migrant parties, which have been gaining popularity amid rising public fears regarding the refugee influx. The polls showed a rise in support for right-wing parties in Austria, Poland and Switzerland. Similarly, anti-migrant and anti-Islam movements such as PEGIDA (Patriotic Europeans Against the Islamization of the Occident") have been on the rise.
Last Update: Jan 06, 2016 4:48 pm
RELATED TOPICS