Paris's Champs-Elysees to shut one Sunday a month for pedestrians 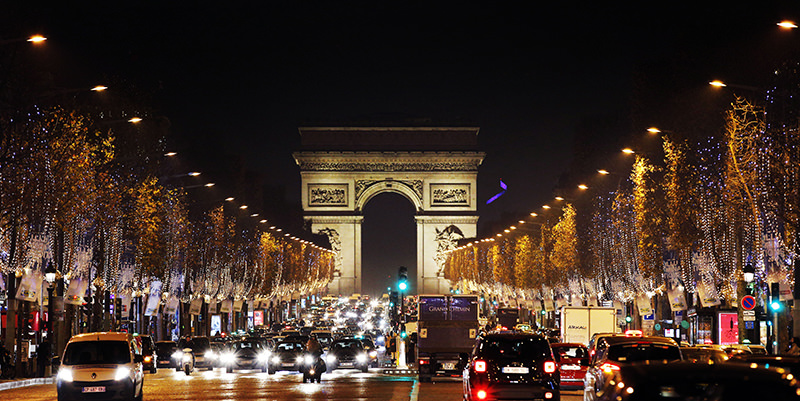 Christmas decorations illuminate the Champs Elysees, as the Arc de Triomphe is seen in the background, in Paris, Monday, Dec. 14, 2015. (AP Photo)
by French Press Agency - AFP Jan 07, 2016 12:00 am
Paris's famed Champs-Elysees will soon be closed to traffic one day a month, allowing pedestrians to take over the chic avenue lined with some of the world's most expensive stores, the city's mayor said Wednesday.

The broad, glittering avenue, a must-see for visitors to the French capital, stretches from the vast Place de la Concorde square up to the Arc de Triomphe monument.

However its renowned beauty can be hard to appreciate with eight lanes of traffic roaring past major chains such as Louis Vuitton and Abercrombie&Fitch, while tour buses line up bumper to bumper dropping tourists off for a photo opportunity.

Mayor Anne Hidalgo's office said the plan to bar cars one day a month would likely start in April.

The environmentally minded mayor also said that from April, one in two Parisian parks would be open 24 hours a day.

Pollution has become a major problem in Paris and several other French cities, whose air periodically becomes clogged with tiny floating particles that can penetrate deep into the lungs and the blood system and can cause cancer.

The World Health Organization says fine-particle air pollution is responsible for about 42,000 premature deaths in France each year.